On the eve of their next album release, Matteo ranks Arctic Monkeys' top five albums so far... 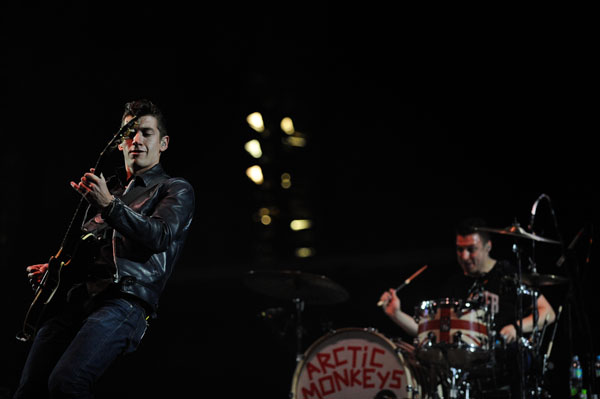 For many, ranking Arctic Monkeys records is almost like choosing a favourite child. Arguably the closest thing this generation has to the Beatles, the band have constantly renewed their sound with every record, while maintaining a massive global fanbase essentially from the get-go. With their sixth album, the sure-to-be-divisive Tranquillity Base, looming on the (lunar) horizon, Impact delves into the Sheffield quartet’s full-length efforts thus far. Put your pool cues down and strap your leather sunglasses on… this was always going to be controversial.

Part beautiful balladry, part love-letter to surfer rock, the Monkeys’ fourth full-length bursts with the band’s best love songs, while also taking a sharp left-turn into the American indie influences they’d flesh out in AM.

While songs such as ‘Black Treacle’, ‘The Hellcat Spangled Shalalala’ and ‘That’s Where You’re Wrong’ are infectious and moving enough to justify See’s existence, almost all the faster songs on offer here feel misplaced. The result feels less like one cohesive record than a couple of EPs mashed together, but this is still a great record to dip in and out off for summertime jams.

Under-rated highlight: ‘All My Own Stunts’

4. Whatever People Say I Am, That’s What I’m Not

I’m aware I’ll probably be excommunicated for this. Allow me to offer a quick defence.

Ranking every Arctic Monkeys record is like choosing a favourite child because they are all brilliant, and a fourth-place Monkeys album is leagues ahead of most of the Number Ones on the National Charts. Whatever People Say I Am is an important record, and, despite its scrappy execution, most of the songs still hold up as rollicking bangers and accurate testimonies of the naughty side of nightlife.

However, much of the record is samey, too, with songs such as ‘Vampires’ and ‘From the Ritz to the Rubble’ being not so much dwarfed as entirely swallowed by their far superior neighbours.

WOAH. SIT DOWN! Listen to this record again. No, seriously, listen to it. Yes, it heaves with some of the band’s best songs to date. ‘Do I Wanna Know?’, ‘R U Mine’, ‘Arabella’, ‘Why’d You Only Call Me When You’re High’ and ‘Knee Socks’ are all undisputed masterpieces, brimming with leather-vested sexuality. But what about the other half of the record? With a weak middle section, much of AM tapers into forgettability.

Expanding on the concepts that made Whatever People Say I Am an instant hit, the band’s sophomore effort does everything louder and better, and, most importantly, adds much-needed variety into the mix. In my Scrapbook review for the record, I stated it “isn’t as consistent as their debut”; however, the heights it reaches are much higher.

‘Brianstorm’ is ‘I Bet You Look Good on the Dancefloor’ on steroids, and the pace rarely lets up from there. ‘Flourescent Adolescent’ was the band’s best tune to date, and ‘505’ teased a darker and more operatic sound the band would expand further in Humbug and AM. Whatever People Say I Am may have opened the door for them, but this was where our favourite worst nightmares took their first steps on the path toward greatness.

Should’ve Been Longer: ‘D is for Dangerous’

Dark, twisted, and beautiful, Humbug is often left to the bottom of the barrel, stewing in its own filth. But look past the nightmarish lyrics and unconventional arrangements, and you will find some of the most interesting songs set to record in the 21st century. The Arctic Monkeys mess with timing and convention as much as they do audience expectations, leading to the masterpieces that are ‘Secret Door’ and ‘Dance Little Liar’.

A concise ten song set, there’s absolutely no filler here, allowing the band to fine-tune every little detail of every song, each of which brings something new to the table. Compound this with the band’s best rock song (‘Crying Lightning’), greatest ballad (‘Cornerstone’), and one of the most haunting closers of all time (‘The Jeweller’s Hands’), and you have yourself a near-perfect record. More of this, please.

Most UoN-appropriate lyric: “Yours is the only Ocean” (‘Potion Approaching’)