Behind the Scenes at NNT – Dirk Gently’s Holistic Detective Agency

Sophie treats us to another Behind the Scenes interview at the Nottingham New Theatre...

Based on the novel by Douglas Adams, this play tells the story of Richard, who alongside his detective friend, Dirk Gently, embarks upon a crazy quest to uncover his boss’ murderer. The investigation soon unravels when Richard makes an unlikely discovery, and so the humour begins. Ahead of the opening show, Impact had a chat with director Arthur McKechnie and producer Jess Donn to hear their thoughts.

It was Donn who first “stumbled across” the script. “The play was originally adapted by two students at Oxford, written for student theatre, which I thought was really cool. At the New Theatre we do a lot of dark, gritty plays, so I wanted to produce something fun and silly”.

For first-time director McKechnie, it was the play’s comedy that first drew him in. “The sense of humour resonated very much with my own, and I could see the characters and the set very clearly, so it seemed like a good thing to direct and put on. It’s also got the sci-fi 80’s aesthetic, which I really like”.

“we let the cast do what they wanted with the space”

“I’ve always enjoyed comedy, but I’ve never acted in or directed a comedy before. I’ve usually been in relatively serious stuff, so it’s been different in that way, but interesting”.

Describing the rehearsal process of this production, the two comment that it has been a very collaborative and cooperative process together. “We were also really encouraging of the cast to throw out ideas and see what sticks, see what is the funniest”, Donn adds. As McKechnie states, “we set out the basic ideas of what we wanted to happen, and how a scene would need to go, but we let the cast do what they wanted with the space”.

It’s important to bounce around new ideas throughout the process, McKechnie explains, “especially for comedies because you don’t want it to ever get stale, so it always needs to be changing”.

“We’ve been really lucky that the whole cast get the comedy that we’re going for, and it’s a cast of eleven”, Donn comments.

The process has been challenging for the pair due to the “scale” of the production. As Donn describes, “it’s massive, we’ve got a double-storey set that needs to encompass at least 5 different locations, there’s so much light and sound, we have video projections…”.

“Rehearsing has been so fun”

“Translating the play into the space has been a challenge,” McKechnie continues, “because of the scale of it, and because we’re limited in space. But it’s all coming together”.

When expressing their favourite part of creating the production so far, McKechnie says “it’s probably been seeing the cast go with the script and go with their own ideas, and letting them have their own take on the characters and scenes to allow the humour to develop. Rehearsing has been so fun”.

For Donn, though, “my favourite thing hasn’t technically happened yet, because my favourite part of the play will be opening night. I’ve done plays here before and it just makes everything worth it when you see it on stage for the first time and it goes well. I think people will enjoy it, so seeing the audience laugh will be so reenergising”.

“One of the beauties of this show is that I know it will be good, but I have no idea what will happen on opening night”.

McKechnie adds, “we just hope people show up and enjoy it as much as we’ve enjoyed putting it on. It sounds cheesy, but that is what we would like people to take away from the performance. We want everyone with loads of different senses of humour to get it”.

“It’s deadline season and everyone is a little bit stressed, so if someone could come for two hours and escape into this mad world, then that’s what we want,” Donn explains. 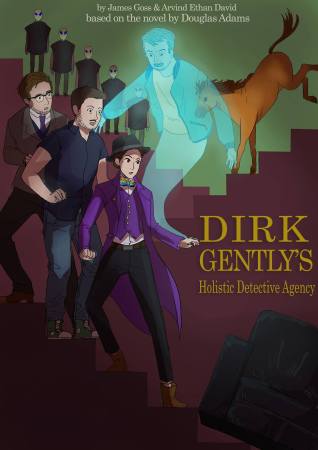 When asked to sum up the play in just three words, McKechnie goes for “funny, mental, and complex”, while Donn chooses “aliens, madness, and comedy”. With those descriptions in mind, why not take a break from revision or coursework and immerse yourself into the wonderfully weird world of Dirk Gently?

Dirk Gently’s Holistic Detective Agency is on at the Nottingham New Theatre from 9th-12th May.