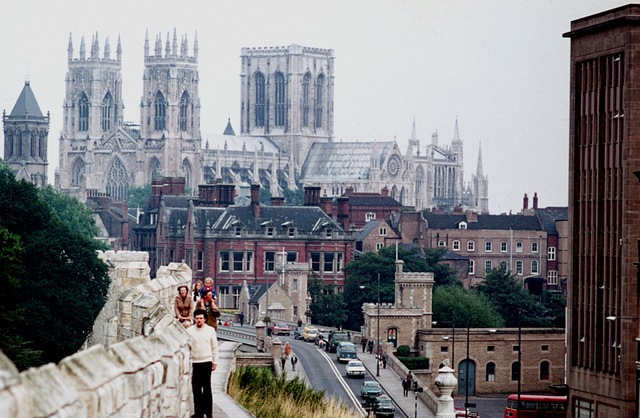 have visited York on multiple occasions since I started University as one of my best friends from home studies there. Like a lot of UK cities boasting two popular University’s, the University of York and York St John University, York is one of those love-hate cities for students.

The contrast between the relatively recent campus buildings with the timeless cobbles of the town-centre means the two are rather disparate, not dissimilar from the stark difference between the University of Nottingham’s green campus and concrete town centre.

Their campus isn’t as pretty as Nottingham’s, instead being filled with huge modern buildings and plenty of geese. York, like Oxbridge, has ‘colleges’ instead of the average ‘halls’ most Universities have. Their colleges don’t, however, live up to Oxbridge’s visually, but this is most likely due to the large difference in funding. The huge lake is undoubtedly the best part of their campus, especially at night, where different colours light up the water and the central fountain.

The University of York’s accommodation was definitely better than Nottingham’s in a number of different ways. My friend was staying in James College during his first year, which consists of fourteen different blocks. Each block had three floors, with around six to seven students living on each floor. Most first year accommodation (except Nottingham it seems) sees this amount of people sharing one kitchen. York instead have all three floors sharing one kitchen, which may seem like too many people for one space, but it means freshers meet a lot more people in their first year. Not only this, but a lot of York colleges, including James college, have the best of both world’s food-wise, being catered during the week and self-catered on the weekends. This saves students the stress of cooking after lectures or seminars but ensures they aren’t completely inept in the kitchen when they are fully self-catered in second year.

“There is also a long walk along the City Walls, which are the longest medieval town walls in the whole of England”

York is a city crammed full of culture and super cute cafes and shops. The ‘York Roast Co’ is one of the cities’ most popular food places; a sandwich shop selling Yorkshire pudding wraps crammed with roast dinner meats and veg. The city has two of these shops, with queues always falling out into the street due to popularity. Brew & Brownie is my personal favourite for lunch, selling quirky cakes and drinks for a reasonable price. As well as food, there is plenty of things to do throughout the day…

There’s things to do which won’t cost a penny, for instance, you can walk down the city’s most famous street, ‘Shambles’, which was the inspiration for ‘Diagon Alley’ in Harry Potter. The York Minster (the city’s cathedral) is perhaps York’s most beautiful monument. There is also a long walk along the City Walls, which are the longest medieval town walls in the whole of England, allowing people to see some amazing views.

What is perhaps best about York’s centre is its streets; all cobbled and crammed full of various shops and restaurants. This means it can be confusing to navigate at first but is a much nicer environment than the typical bright indoor shopping malls full of people (cough cough, Viccy centre).

York’s night-life is completely different to Nottingham, which I think puts off a lot of people from choosing York as their University, instead opting for cities with a better nightlife, like Leeds, Manchester or Birmingham.

However, I do not think a smaller club size (and capacity) is necessarily a bad thing. I found the students were much less aggressive than in Nottingham clubs. Also, most of the clubs were much more interesting visually. Fez is my personal favourite, boasting an amazing VW campervan on the ground floor. Mansion was also super fun and visually different from any club I have been to, being completely underground so there is no natural light and just brick walls, which created a moody and grungy feel.

I highly recommend going to York either to visit a friend or with friends for a weekend, it is definitely one of the prettiest cities I have been to in the UK.