Head of Steam is a real ale bar and restaurant conveniently located in Lace Market near the common attraction Nottingham Contemporary.

Once inside the bar/restaurant we were shown to our table, a booth at the back away from the bar area. The first thing to notice was the décor which showcased a lot of wood and wall art which, along with the dim lighting (but not too dim) gave off a pleasant and chilled vibe reminiscent of a clubhouse. This vibe was also reinforced by the Jazz music which played quietly in the background throughout the meal. 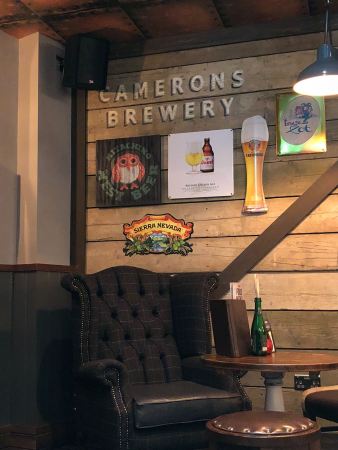 The only criticism was that the wall dedicated to Nottingham City Centre looked a bit tacky and didn’t fit in particularly well with the overall aesthetic of the restaurant. Along with this, all the windows were open. Although this brought a welcomed breeze on a warm Thursday evening, as time went on it began to get a bit too cold inside.

When browsing the menu, we were completely taken aback from the number of ales which were offered. After counting for a while I got to approximately 150 which included gluten-free ales, ensuring anyone with intolerances could also enjoy. Also if you’re like me and not into beer, there are also a wide range of cocktails for offer, and at £6.50 a go, is reasonably cheap compared to other bars such as Be at One, or All Bar One. In the end, I decided on a ‘Raspberry Chew’ cocktail, whilst Nico had an ale which the barman chose as a surprise, this was called ‘Guardians of the Forest.’ The ale wasn’t too bitter and was an IPA, whereas the cocktail was amazingly fruity, tasting more like a fruit punch I could have kept drinking them all night (although I realised that would be dangerous.) 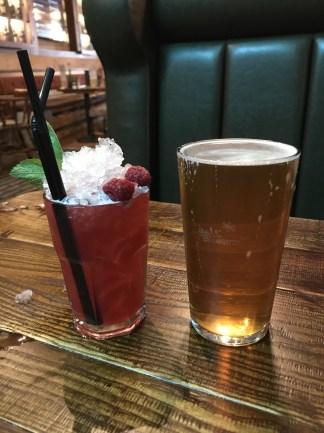 The food menu was large enough to accommodate all preferences and served anything from steak to pie and mash and a few vegetarian dishes too. Although Head of Steam does not offer student discount the meals are reasonably priced. With the most expensive on the menu being steak at £17, most of the other meals were hitting then £10 mark, an acceptable price for us students on a budget.

After a while deciding Nico chose the ‘Chicken Milanese’ and I chose the ‘Sautéed Mussels.’ The service was very quick and we didn’t have to wait long before we were served our food. The mussels were well cooked and were tender and fresh. They complimented the sweet taste of the sauce, a mix of paprika, chorizo and tomato, making the dish tasteful with a bit of a kick, (but nothing too much.) This was served with chips which were well seasoned and not overcooked. At £9.95 I thought this was great value for money! 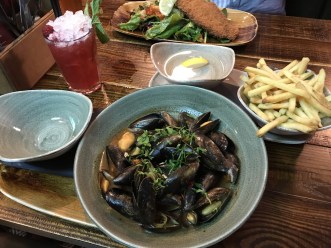 Nico’s ‘Chicken Milanese’ was also really nice. The chicken breadcrumb was crisp but not cooked too much that the chicken was dry. This was served with oven baked potato strips and a well-dressed rocket salad, supplying a healthier and different alternative than the simple chips. £11.95 meant this was also great value, especially as it was a very big piece of chicken. 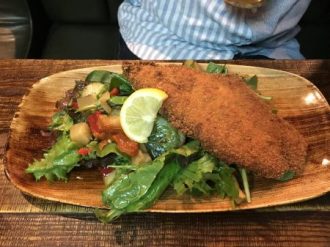 One thing which should be noticed was the staff. Both members who served us were extremely polite and helpful in helping us choose an ale and our meals. They made sure everything was okay with our meal and asked on a few occasions if there was anything else we needed.  An attitude which is always welcomed as a customer.

After finishing our food, we were surprised by the sudden change in music, from Jazz to live music being performed around the bar area. When looking at the leaflets on the table we learnt that there was live music every Thursday and Sunday, a great addition to any bar/restaurant and great for an older audience. However, although the music was good it was a bit too loud, drowning out any conversations which were attempted, you couldn’t really hear yourself think.

I also learnt that Head of Steam have multiple deals and events, making the bar/restaurant even more impressive. They offer ‘Beer and a burger for £10 on Wednesdays,’ ‘Lunchtime offers’ and ‘Afterwork socials’ where they charge £6 for 2 glasses of prosecco. £6! Along with this and their live music, there is also an interactive quiz on a Wednesday. All these added extras to a bar/restaurant are great, adding activities and atmosphere makes it anything but a boring place. 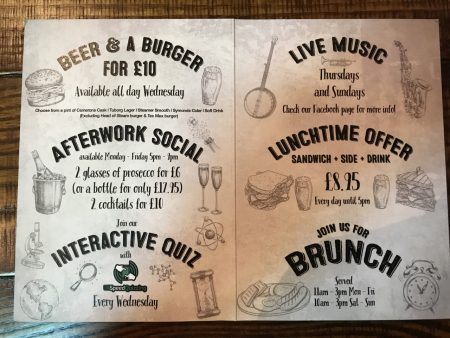 Overall the food and atmosphere was great and thoroughly enjoyed. My only criticism was some of the aesthetic and having the live music a bit too loud. Other than that I think this bar/restaurant is the perfect place for everyone and would definitely recommend.

All images courtesy of Emma Heasman and Nicolas Caballero.

Squad Review: Where does Karanka need to focus his summer shopping?