Mixed Emotions at David Ross in the Varsity Futsal

The stage was finely set at David Ross for the two Futsal matches which would decide the winner of this year’s Varsity series. Following wins in the Basketball and Netball, Nottingham Trent knew that two wins could potentially see them named this year’s Varsity champions. However, it wasn’t to be, as a superb display from the University of Nottingham Women’s Futsal team meant the trophy would be retained for the seventh year in a row.

After a tense start, UoN were eventually able to take the lead, when striker Olivia Mitcham was on hand to tap the ball in after the ball had hit the post. This lead was quickly built upon by the Green and Gold side, who finished 3rd in the Premier North division this season, as a lovely passing move found Linnea Kremer, and the dynamic midfielder slammed the ball into the bottom corner.

Mitcham was causing all sorts of problems for Nottingham Trent, and she quickly added her second and UoN’s third, after Ana Mihajlovic produced a superb piece of skill and cut it back for Mitcham to smash home.

UoN were rampant at this stage, and the team’s strikers were keen to get in on the act. Katie Gray added a fourth when she beautifully controlled Cassie Ulrich’s long throw before turning and finishing through the keeper’s legs. Soon after Mitcham was able to grab her hat-trick when the ball fell kindly to her inside the area, and the striker made no mistake.

There was still time for a sixth before halftime, as Kremer produced a scintillating run, nutmegging one before shrugging off another and firing past the stricken keeper. With the score at 6-0 at halftime, the University of Nottingham could almost be sure of a seventh consecutive Varsity win.

Unfortunately for Trent, who lost all but one of their games this season, there was no let-up from the home side in the second half. Poor defending from a kick-in left Anna Tilley with all the time in the world to slide it past the keeper for number seven. Kremer, the game’s standout player, was also allowed to complete a hat-trick of her own, with another composed finish.

Trent looked as if they had given up hope when Morgan Mitchell quickly added a ninth goal after she was left unmarked from a corner routine. However, credit to Trent as they kept going, and managed a goal of their own when Ulrich was forced into a smart save, but she couldn’t prevent the Trent striker from smashing in the rebound.

Moriah Earley soon made it double digits for the Green and Gold, when she turned smartly and clinically smashed the ball into the bottom corner. There was further misfortune for the away side when they managed another goal back after a strong run and finish, but she was injured in the process and forced to go off. Earley then managed to grab her second and UoN’s eleventh, when another good Ulrich throw set Kremer free and she knocked it across goal to leave Earley with an easy finish.

Things got worse for Trent when their number eleven was sent off for kicking out at Kayla Kret, who got to her feet quickly and later provided a lovely pass for number twelve, as Tilley’s deft touch wrong-footed the keeper. Kremer rounded off a wonderful display with her fourth goal late on, before Trent managed another consolation with seconds remaining.

This victory meant that the University of Nottingham had officially retained the Varsity series, and the girls celebrated with the trophy. However, there was still the matter of the men’s game to play, and it was anything but a dead rubber.

An apt thrashing of their #NottsVarsity rivals in Women's Futsal sees @UoNSport secure the Varsity crown for a 7th year running!

The away side came into the game as strong favourites, after they topped the Premier North, losing just one game all season. However, the Green and Gold side have had a strong season of their own, finishing top of the Midlands 1A, and they started the better side, taking the lead when James Cullimore was found by a clever free kick, and his first-time effort beat the defender on the line.

There were few chances of note in what was a tense first half, but a superb individual goal from Nick Lane established a two-goal advantage for the home side, as he smashed the ball into the top corner from range. UoN were then presented with a great chance to extend the lead further when a tenth foul from Trent meant that the home side would have a penalty kick, but Riley remained big in the Trent goal and was able to make the save.

This added a spring in the step of the away side, and they were quickly able to counter, which left Kasey Riley with time to smash past Lazarus in the UoN goal. With just seconds until half-time Trent was able to grab an equaliser, when a free-kick routine found Jordan Riley and he smashed it emphatically past Lazarus.

It was a strong start to the second-half for the Green and Gold side, and star man Nick Lane grabbed his second goal, after a lovely one-two left him time in the Trent area, and his deft finish beat Riley to make it 3-2. Unfortunately, that would be as good as it got for the home side, who then succumbed to an extremely strong second half from the away side. Judd quickly got the ball rolling when he smashed past Chowdhury to make it 3-3, and this was swiftly followed by a fourth for Trent when Francis controlled the ball expertly and volleyed past the keeper.

The third goal in two minutes seemingly put the game beyond the home side, as Mueller’s powerful deflected strike proved too much for Chowdhury. The dangerous Humes added a sixth with another clinical finish, before Francis’ late second wrapped up the win for Trent, who deservedly claimed the victory after a superb second-half showing. 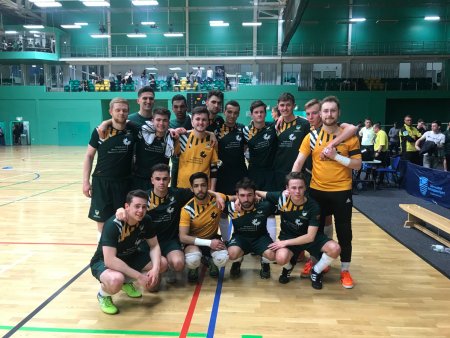 Images courtesy of ‘University of Nottingham Student’s Union’ via Twitter