Ghosts, Murders and Poets: The History of Newstead Abbey

Not far from the town centre of Nottingham, if you wish to wander on the bus, sits Newstead Abbey, nestled in the heart of Sherwood Forest. Having worked at the Abbey for two years now, I can tell you that I have fallen more in love with the building and its stories every day. It’s owners range from halls of monks to local knights to world famous Romantic poets, and it has housed many famous names including David Livingstone in its time standing.

One of the many charms of the site is that it still shows the many layers of history within the building. The hollow windows of the old Augustinian priory sit in front of beautiful Victorian gardens. For Nottingham locals, Newstead is an essential experience, and for anyone coming to the city to study, I believe you should not miss what the house has to offer.

“Within the house, you can experience the old medieval cloisters and get a sense of what life was like back then”

The Abbey was originally a priory, but like many other religious establishments of the time, faced destruction and distribution at the hands of Thomas Cromwell. Still, within the house, you can experience the old medieval cloisters and get a sense of what life was like back then. The house was passed to a local knight, Sir John Byron, and for 300 years the estate remained in the family.

Like many old houses, there are many local stories about the place and the family who lived there. The son of Sir John is an example of this, as he was said to have died laughing after plotting a prank on a servant boy. He placed a thistle beneath the boys saddle, causing the horse to buck and the boy to fall and the Byron son to die at his own mischievous hands.

When visiting Newstead, one of the best elements of the experience is the chance to talk to the tour guides within the house. David Newport, who I spoke to regarding the many years of history of the house, has tales up to his ears, and is happy to talk to any who ask about the many stories of the Byrons and their successors.

“The Abbey runs regular ghost evenings, where you are guided around the house and given insight into the haunted legends of the ancient building.”

Of course, the most intriguing tales to come from Newstead are their ghost stories. The Abbey runs regular ghost evenings, where you are guided around the house and given insight into the haunted legends of the ancient building. These stories are so infamous that even the Poet, Lord Byron, writes about them in his work. In fact, the Black Friar of Newstead, who’s painting still hangs in Byron’s chambers features in Don Juan, is said to still roam the grounds of Newstead after he refused to leave when Cromwell’s men came to call.

But he is not the only larger than life character from the archives of the Abbey. The Wicked Lord, the fifth Lord Byron, is well-known in the locality. During his time at Newstead, he would host miniature naval battles in tiny scale boats on the lake at the front of the House. Many poor servants were enlisted in these adventures, and are also said to have been used as target practise. In the Abbey, you can still see one of the tiny doors from these military boats, which made the Lord very unpopular with the locals and his staff.

Neighbouring elite, housed at Annesley Hall not far from Newstead, also fell victim to Lord Byron’s cruelty. William Chaworth, the Lord’s cousin, and Byron argued in a tavern in London, which resulted in Byron running Chaworth through with his sword. This was not the only life known to be on the hands of the Lord, as he shot his coach driver one night outside the Abbey when the driver refused to go any faster down the drive.

“What Newstead is most known for is the Poet, Lord Byron, a regency socialite, Romantic poet and all round general troublemaker.”

What Newstead is most known for is the Poet, Lord Byron, a regency socialite, Romantic poet and general troublemaker. In his day, he was a sort of rockstar, admired for his good looks and bad reputation. In fact, a contemporary had described him as “Mad, bad and dangerous to know”. Much of the Abbey is left in dedication to the Poet, partly due to the successors of the house. His dining room, bedroom and study remain untouched, with the latter housing his infamous skull cup made from a monk’s cranium found when Byron was digging for gold beneath the cloisters.

When Byron lived in the house, however, it was in a state of dilapidation, and much of the house was in ruins due to his great uncles disregard for the upkeep. One interesting story about this is the Great Hall, now in a state of Victorian splendour, which was then used by Byron for pistol practice and to house many of his large animals, such as his bear and wolf.

Byron’s influence is also felt in the grounds, the prime example being the large memorial to his dog behind the Front of the house. Bigger and more impressive even than Byron’s own grave, the testament to Boatswain is a brilliant sight at the Abbey. Like many loyal dog owners, Byron wanted to be buried with his dog, but unfortunately by the time of his death the Abbey had been sold and he had to be buried with his family instead.

“Livingstone was a guest to the Webbs for Christmas one year, and managed to crack his head open playing a game of Blindman’s Bluff,”

The last people to live in the house were the Webb’s, a Victorian family who’s touch can still be felt in much of the house. Like many Victorians, Mr Webb had a taste for hunting, and his trophies can be seen lining the walls of the Great Hall, along with a painting of his time in Africa with the explorer David Livingstone. Livingstone was a guest to the Webb’s for Christmas one year, and managed to crack his head open playing a game of Blindman’s Bluff, so make sure to remember that when looking at the grand old fireplace.

For anyone with an interest in Nottingham history, or Romantics, make sure to visit Newstead Abbey. Pack a picnic, put on your boots, and grab an ice cream whilst you explore the grounds and the house. Oh, and don’t forget to say hello to Arthur, the Peacock. 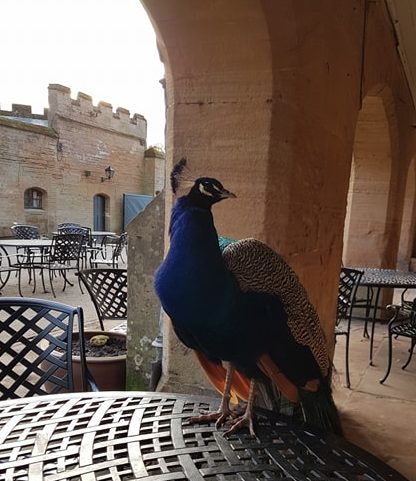 The Spoon’s Pitcher That You Are, As Determined By Your Star Sign