Barn on the Farm Festival graces Gloucester’s Over Farm every July, bringing some big names and many emerging artists. Having started as a couple of hundred people, it has grown over nine years to become a noteworthy event of just the right proportions. It lives up to its slogan ‘Bringing New Music Closer’ and Impact had the privilege of experiencing the intimate festival.

Greeted by horses and an almost empty field, we fastened our wristbands, set up camp, donned our lanyards and were off to explore what quickly became the farm we wished was our home. The ostriches, chickens and ducks satisfied our farmyard needs, but it was the stages that provided its authenticity. As we arrived on Friday we were lucky enough to access Behind Barn Doors seeing some wonderful artists in the very personal settings of the Wooden Barn and Tin Barn stages.

The first act we stumbled upon was Keir. We overheard his incredible vocals from outside and could feel the energy within the barn. He was followed by Rosie Carney in the Tin Barn whose angelic voice also kept us transfixed, setting the standards high for a weekend that didn’t let us down.

From festival favourites to international vegan street food, deciding where to eat was difficult. After devouring Eat Like A Greek’s halloumi and chicken pitta wrap we were ready to go again and experienced Lauren Aquilina’s powerful set. Her punchy and uplifting songs such as ‘Gucci On My Body’ got the crowd going and it was hard not to join in. Billy Lockett then added a new dimension with his beautiful lyrics, voice and piano skills. He was humble and overwhelmed by the size of the crowd, it felt so special seeing him in this unique setting.

After Skinny Living’s impeccable harmonies and beats, we came to the highlight of the night: Youngr. Playing the drums, guitar, decks and singing, he wowed the crowd with both his own singles and remixes. Youngr’s energy was contagious, transforming the space into what felt like a club (but so much better).

“‘It’s Coming Home’ infiltrated the festival grounds and even artists’ sets, really bringing the crowd together.”

The tone of the evening then changed completely with Hudson Taylor. We had to be silent for a lot of the performance as they were huddled around one mic, only to later join in with the singing, creating a campfire atmosphere. It left us buzzing and ready for secret headliner HONNE who finished the evening by planting smiles on everyone’s face.

On Saturday we woke up to extortionate heat and eagerly accepted our neighbour’s invitation to sit in their paddling pool (genius) before heading out to soak up both the sun and music. The angelic voice of Delilah Montague, energy and emotion of Ten Tonnes and talent of The Howl & The Hum set the day off to a great start, which was then improved by England’s win against Sweden! Watching the match on a buffering laptop with people cheering at different times across the campsite was an experience I won’t forget. From then on ‘It’s Coming Home’ infiltrated the festival grounds and even artists’ sets, really bringing the crowd together.

After Lewis Capaldi’s emotional performance on the main stage, brought to light by his wonderful sense of humour, Lewis Watson took over the packed Wooden Barn, even coming down from the stage into the middle of the crowd to get us to sing an acoustic version of ‘It’s Coming Home’. Tom Walker then graced the main stage for the third year running and aced his performance. Energy levels were high following ‘Leave a Light On’ and we were ready for the first headliner of the weekend: Tom Grennan. 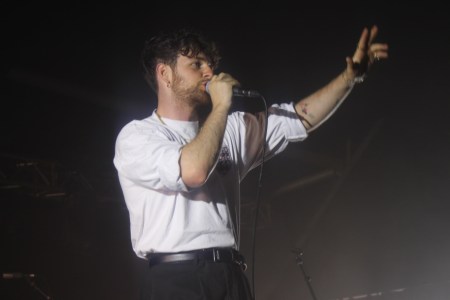 Dressed in an England football shirt, Grennan hyped up the crowd with his boundless energy and enthusiasm, performing the songs from his newly released ‘Lighting Matches’ album. His outgoing personality, engagement with the audience and dynamic performance left nobody standing still. Saturday night was definitely party time and everyone knew it.

Sunday was another scorching day, but we made it out in time to see Lily Moore. A cross between Adele and Amy Winehouse, she rocked the main stage with her powerful vocals – certainly an artist to watch out for in the future. JC Stewart charmed the Wooden Barn crowd, Eliza & The Bear got us going on the Outdoor stage with their dancing and water gun antics, and Dermot Kennedy captured the audience’s attention with his reserved stage presence but big and emotional performance. Then it was sadly time for the last act of the weekend.

Tom Misch was highly anticipated amongst the main stage crowd and he delivered, immediately indulging in the music. Although he did play some tracks from ‘Geography’, he seemed to enjoy playing his instruments more than singing, turning his performance into something that resembled a jam session. Barney Artist and Zak Abel’s surprise appearances hyped up the crowd along with the talented band. It was a delightful and chilled out set which left us all wanting more and finished the weekend on a definite high. 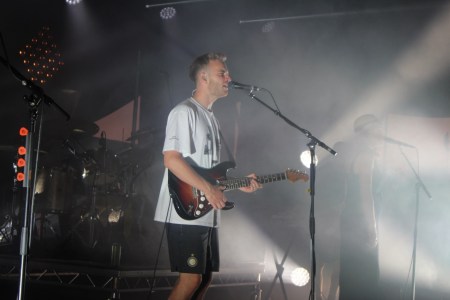 Winner of Best Independent Festival in 2014, I had high hopes for Barn on the Farm. Its line-up attracted me, but it was only having experienced the festival that I realised just how special it is. The acts surpassed my expectations and I have discovered many new artists by just wandering amongst the stages. The weather was amazing (if not too hot for camping), the food was delicious and reasonably priced, everyone was so welcoming, and the music was incredible, creating an unforgettable weekend. I’ll be sure to visit the animals at Over Farm again soon.

All images courtesy of Katie Moncur.