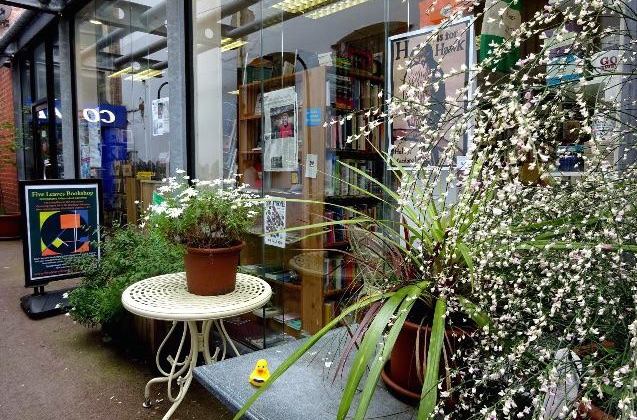 How does it feel to have won this award?

“Very pleased, we’ve been here for about five years in November and it’s great that we’re still here. We put in a proposal to be shortlisted for the last three years but never won it and when we tweeted about it, it became one of our most liked!”

Since then Leah explained that they’d been high profile in the media and gained a lot more attention and custom. When I spoke to her they were looking forward to travelling down to Grosvenor House in London and were crossing their fingers. She was a little hesitant to admit that she thought they were in for a chance to win, which we know is true in light of the fact that they did indeed go onto win the Best Independent Bookshop Award.

Five Leaves is certainly a bookshop that’s shaking things up in a big way. This summer alone they co-ordinated and underwrote the National Feminist Book Fortnight and hosted five events in Nottingham for it. In total, it involved fifty independent bookshops, a library and a couple of art galleries, all doing displays or their own events.

But this isn’t the only events they’ve had or will go on to host. They’ve been organising a programme of events since just after the shop opened – hosting around 88 events last yer alone. They’ve even gone on to produce a seasonal full colour printed programme since Autumn 2016!

How did it all begin?

Ross used to work at another independent book shop in Hockley area called Mushroom Bookshop until 1995 with it unfortunately closing 5 years later in 2000. It was like a co-op more than being independently owned and was both radical and feminist. Ross then continued to publish under Five Leaves before inheriting some money from his mother who pushed him to pursue his dream.

And thus, Five Leaves was founded in 2013 and they’ve been here ever since. They didn’t really know what the expectation was, but they opened at Christmas which was a good time of the year because people wanted it.

“The shop is very much focused on its community and people’s passions and the events that they host are so diverse that it means people are able to learn something new and unexpected.”

A whistling book event by a man called John Lucas. The events are a way of reaching potential audiences as well as opening people up to something new and unconventional. It was a strange but brilliant event that she attended prior to working at the shop. The shop is very much focused on its community and people’s passions and the events that they host are so diverse that it means people are able to learn something new and unexpected.

“There’s sometimes a misconception in which people think that you’re sitting down and reading all day, but a lot goes into it”

“We used to have a section called ‘esoteric’ which consists of many miscellaneous subjects such as steampunk, runes, paganism- things that you can’t put under one specific name, it’s very much a mixed bag!”

The best thing about your job?

“I’m very passionate about poetry, working here means that you’ve learnt a lot. I order all the poetry books and whatever I want, and it also means that when I find somebody new that I can tell people about it. There’s sometimes a misconception in which people think that you’re sitting down and reading all day, but a lot goes into it.”

“We once found a carrier bag with £7,000 in the alleyway! It was a zip-up bag and we were going to bin it but then Simon looked inside and found some personal belongings that identified the man. He came and collected it and then never came back.

Otherwise, we’ve had some weights dumped down the alleyway and often get used as a changing room for Primark which is amusing.”

All in all, if you haven’t already, I heartily recommend you go and check Five Leaves out as one of Nottingham’s few independent bookshops and a reigning regional treasure. And help to prove Nottingham’s reputation as a City of Literature!

You can find out more about Five Leaves upcoming events on the website here: https://fiveleavesbookshop.co.uk/ or follow them @Fiveleaves on social media for more updates.

Featured image courtesy of the owners of Five Leaves bookshop