Esther discusses the recent Showcase #MyGenderisMine, held in our very own Portland building this June.

Upon entering Portland’s studio, I was instantly struck by the warm and jovial atmosphere that radiated from within. I showed up a little earlier than anyone else and was introduced to some of the minds behind the showcase: Andy, and the photographer Antoinette Belle.

“I started this campaign to give people the opportunity to express and explore their gender however they wish to” says Andy.

I agree that the showcase was a celebration of gender and identity with groups of people milling around chatting and a t-shirt making stall set up in the corner. I chatted away to Antoinette Belle for a little while as I made my way around the series of photographs on display. Each centred around one of four subjects: Molly, Gabe, Slater, and Andy. 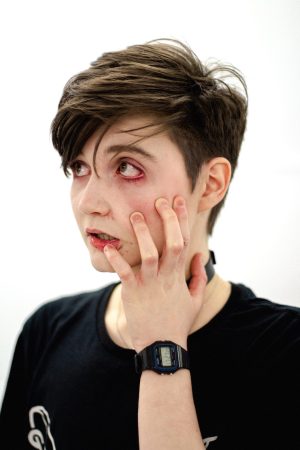 The photography reflected what gender meant to the individual, how they expressed it or how on an emotional level it affected them. Each series of photographs was unique to that person and was accompanied with their own description of what their gender meant to them personally. This was mirrored in the photos in various ways – drenched in pink paint, reaching out to the camera in anguish, hands poking and pulling at someone’s face – I felt these aspects of the photographs both rejoiced in taking ownership of one’s own identity yet simultaneously addressed the constraints that still plague society.

“I don’t fit in either of the binary boxes that mainstream society says are the only two gender options” – Slater.

The showcase allowed people to engage with gender identity in an educative and inclusive form. As I made my way around, I noticed a poster listing terminology relating to some LGBTQ+ terms and their definitions in case some people were unfamiliar with them.

I found the photos on display beautiful in the very fact that each was unique to that one person and acted as a collage of emotion without uttering a word.

“I just feel like a ghost possessing a body that just isn’t quite right for me, and it was this sense of detachment and ghost like quality that I wanted to capture in this shoot” – Gabe.

The showcase also featured a mini-documentary aptly called, The Tea on Gender. This consisted of three interviews discussing experiences with gender such as awareness, media representation and stereotypes. I found the subject of gender-coding especially interesting as in one interview they discussed the divide between the genders that so regularly dominates ads and other media outlets.

Not only that, but the fact that in today’s society what you wear and how you appear plays a key role in self-identity, and yet, when shopping, male and female clothes allow very little variance. These bled into other subjects such as one story in which someone discussed how, during his childhood, he was thought to be odd for preferring to play with Barbies rather than what we typically view as ‘masculine’ toys, demonstrating the pressure society puts on us, even from an early age, to abide by its gender binaries.

All in all, the showcase for me was a fun and interactive way of starting a conversation about gender identity whilst also being a celebration of self-love and the freedom of expression.

I hope we’ll be seeing more exhibits by Andy and co. in the future!

The fight for the Living Wage continues