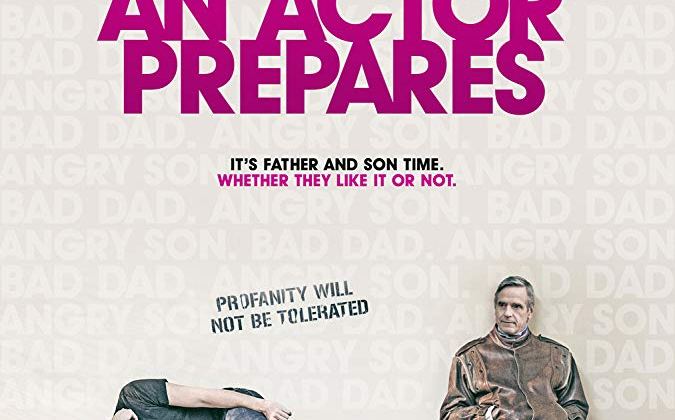 A classic odd couple tale; despite numerous clichés and an at times slightly too predictable script, An Actor Prepares packs a surprising emotional punch due to convincing performances and sharp comic beats.

After suffering a life-threatening heart attack, veteran Hollywood actor Atticus Smith is forced to travel across America with his estranged son Adam to attend his daughter’s wedding. Adam’s task is made more difficult not only due to the fact that his father is a drug abusing alcoholic but also by the burning seeds of bitterness that linger between the father-son duo.

“the character an intentional satire of the sort of real life sexist relic the #metoo movement would devour in much less than 280 characters.”

With the studio fretting about Atticus health in regard to his latest project playing God, a role aptly in line with Atticus’ own ego, the pair romp their way across the States, bickering, boozing and at times reflecting on the ruins of their shattered relationship.

Directed by Steve Clark and based on a script by him and fellow writer Thomas Moffat, An Actor Prepares is equal parts comedy and drama, investigating the lingering resentments and grudges that fester in any familial relationship, especially one this toxic.

The film also employs much of its time ruminating on the consequences and emotional impact of sex, both in terms of intercourse and gender. Primarily Atticus and his son’s relationship broke down after the latter informed his mother of his father’s multiple infidelities, an event Atticus’ has refused to let go off for 15 years.

Atticus’ womanizing persists throughout the movie- he isn’t out of the hospital five minutes before essentially forcing himself upon his doctor – with the character an intentional satire of the sort of real life sexist relic the #metoo movement would devour in much less than 280 characters. His father’s adultery has led Adam to swing as far the other as possible, now making his living as a feminist documentary maker- relenting even to call his partner “girlfriend” to her actual status as a woman. Despite his best efforts, even this relationship can’t escape the impact of his father on him, with his female solidary questioned for its sincerity throughout.

These sort of intriguing and topically significant thematic beats make the film in succeed in being more than just another American indie flick about estranged, awkward parent-child dynamics. That’s not to say the movie escapes all sense of cliché- Atticus’ alcoholic actor thing is not exactly ground-breaking and at times feels a little predictable and forced, as can its more emotional confrontations.

Still, these sporadic flaws are more or less ironed out by fantastic performances by Irons and Huston whose strained chemistry is the sort of stuff all the best black comedies exploit. Irons, a Shakespearean veteran, especially does well at times even succeeding in making Atticus relatively likeable and charming despite his often-deplorable behaviour, whilst comic actor Ben Schwartz is also worth a mention, turning in a typically chuckle-worthy performance as Atticus’ under pressure agent.

Cinematically Clarke’s direction is largely confident and assured, delivering a road movie which manages not to lose pace with itself. Its more emotive moments are accentuated by a score which helps to firmly place it in indie territory, but this is no flaw, as one gets the impression it’s this accolade it’s aiming for.

And that’s no bad thing, to hit your targets. An Actor Prepares is hardly life-affirming, it won’t sweep festivals and in patches it lacks originality- and yet it impressed me far more than I thought it would. Utilizing interesting characters, winning performances and topical themes, it aims for the bull’s eye and hits, even if it shot from relatively close range.

An Actor Prepares is released On Demand from 3rd September.