Interview with Circa Waves at Y Not Festival 2018

Katie had the chance to interview indie rock band Circa Waves, read on to see what they had to say!

Formed in Liverpool in 2013, Circa Waves are an indie rock band constantly growing in popularity, moving from small festival stages to main stages. Impact caught up with guitarist Joe Falconer and drummer Colin Jones before their main stage set at Y Not Festival to find out more about their festival gigs and music, only to receive the news of a new album on the horizon.

Having played Y Not twice before, the guys were excited to be back. Colin explained: “It was such a highlight two years ago that it’s not really left the mind.” Joe felt similarly: “It was one of the first festivals where we were really high up on a main stage and the crowd here are so good. It was a really good gig.” 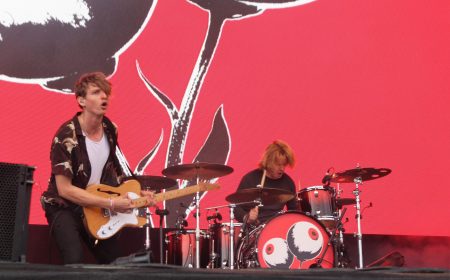 Y Not Festival has won the UK Festival Awards for Best Small Festival in 2012 and Best Medium-sized Festival in 2015. Joe could tell the difference when performing: “The great thing about these smaller festivals is that you get people who want to see music and they’re really into it and it really felt like we belonged at that point.”

Having been on the Festival Republic Stage at Reading, last year they made it onto the main stage before gracing Y Not’s main stage this summer. I asked Joe how it felt moving up to bigger slots: “It’s just like getting a promotion at work really, you hope you get promoted again.”

Colin tried to put into words the excitement they felt: “It’s always that shock of when you get the details through and you’re like ‘nah surely this can’t be real’. I’ve seen so many of my favourite bands play those festivals and playing a slot like that was just-” he did a great enactment of being mind-blown. 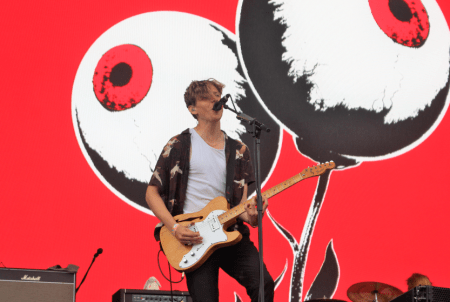 “The first thing is that you’re working on weekends.” (Colin cracked up) “So I’ll go home and spend a really relaxing week in my house or in the park as it’s very sunny (Colin interjected again: “That was the part I knew he was going to say”) and then I turn up refreshed and have three of the best gigs ever because festival crowds are amazing. The other thing that’s really great about festival season is when you see other bands because the rest of the year you’re just touring around and you miss people […] it’s a bit of a social occasion.”

I asked whether they enjoyed travelling so much: “Yeah I mean it’s good if you travel in a level of comfort. […] We were really grateful that we get to not only travel but also go and do the things we love in different places. Hopefully it never ends.”

Colin continued: “That Russia trip we come straight off stage at Truck Festival, had to make it to an airport to get to Russia, flight landed at 4am and we were on at 4pm but none of that mattered because you’re just constantly in this daze of the festival and a new place – it’s good.”

I was interested to know whether crowds differed abroad. Joe: “There are cultural differences but at the same time you just turn up at a place and go ‘Oh s***, there’s f****** 5000 Mexican kids and they’re just as wild as people from Manchester, this is amazing’.”

Colin added: “You can slightly tell the difference where a place that you go and play doesn’t get it all the time. […] They’re so graceful and so happy you are able to come to their country.”

I asked about their favourite part of performing and wasn’t let down: “Seeing Joe drink a bottle of wine throughout the show and still play the guitar.”

Joe, laughing: “No mate I wouldn’t even recommend that to anyone, it’s not a healthy lifestyle choice. I mean it’s because I get thirsty and I deliberately put the water a little bit too far out of reach.”

When asked about their favourite summer anthems, they were completely thrown. Joe: “I don’t listen to music anymore, the music industry’s drained me, I just listen to Talk Radio.”

Colin: “Terrible. You’re getting too old.” The relationship between the two of them is clearly very relaxed and banterous. 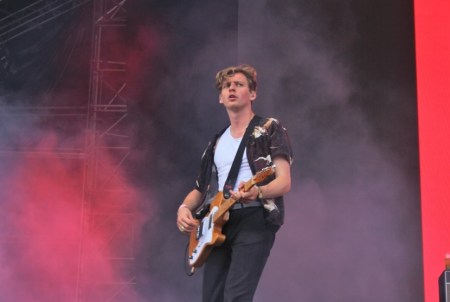 Despite their lack of love for summer tunes, it’s obvious that Circa Waves does well this time of year. Colin explained: “I think I always like it when the tweets come in about ‘T-Shirt Weather’. That’s my favourite part of summer.”

Joe continued: “I love seeing the plays on Spotify shoot up. Honestly this heatwave is making us some money, man. […] The problem with the Christmas song market is it’s overly saturated. Too many people trying to write for Christmas.”

“I feel like we should have been an Australian band and done ‘T-Shirt Weather’. Maximise that.” Colin joked.

When I interjected that in Australia ‘T-Shirt Weather’ could take over the Christmas song market, Joe made a brilliant suggestion: “We should have added a Christmas version.”

Back to the more serious topic of their music and two albums Young Chasers and Different Creatures. When asked about the political direction of the band, Joe contended: “I would disagree to some extent because you write songs about what’s happening to you and what you see around you and I think the first record was very lightweight and chilled. It was about a very specific time in your life which I think people relate to very much but if you write about a particular time and move out of it, it would be madness to pretend you’re still there.”

He continued: “I think there’s a couple of songs on the new record that say something but I wouldn’t call them political. They are purely observations and the politics comes more out of your reaction to it than anything else. I don’t think we want to be a political band but if there’s something happening that affects us then that’s gonna be written about. I think if you’re gonna become a political band you have to sort of really f****** go for it.”

When probed further about the difference in sound between their two albums, Colin surprised me: “Are you talking about the new new album? No no no…” he laughed. The excitement for Circa Waves’ fans increases.

“We wanna get bigger. Onwards and upwards”

“There’s another record on the horizon.” Colin continued.

I asked Joe about their future goals: “Yeah finish the new records. Again, all very different. Basically we don’t want to be the sort of band that stands still so we wanna release a record as quickly as possible. We also don’t want it to sound like either of the last two records and we don’t wanna keep going to the same places […] we wanna get bigger. Onwards and upwards.”

Colin added to this vision: “As shocked as people may be by the new record […] you’re still gonna know that it’s Circa Waves. It’s Waves completely out of the park this next record.” 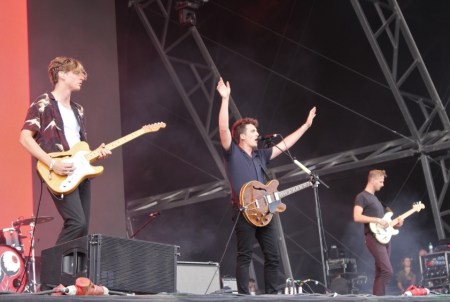 After winning over the Y Not crowd with their performance on Friday, Circa Waves are continuing their jam-packed summer of festivals with slots at Indiependence Festival, 110 Above and Rize Festival.  The past year has already been an intense one for Circa Waves, taking on the main stages with constantly growing crowds, but for their fans it could get even more exciting with the promise of a brand new record. Keep an eye out for any developments as Circa Waves keep getting bigger.

Featured image courtesy of The Outside Organisation.

Creative Corner: Sea Above the Clouds