Despite the festival being well known for its family friendly nature, people from all ages showed up to be a part of Neverworld, a title renamed by Leefest, for those who wish to never grow up. Situated in the grounds of John Darlings Farm in Hever, Kent, locals showed up to support the magical festival which included a wide range of food, music and entertainment, providing those near and far with a memorable weekend under the sun. It was a festival that I was glad not to miss, as I stepped back in time to enjoy the Peter Pan themed nostalgia of my childhood days.

After queuing up to enter the campsite and bearing the hot summer sun at 33 degrees, the first thing on our minds was to find the shadiest spot available. Once the tent was pitched and the deck chairs were up, we were ready to explore the venues, from the Mermaids Lagoon, Skull Ridge and the biggest attraction, the Neverwoods. It really couldn’t be more like your typical Peter Pan world: lets just say it was everything a Disney fan hoped it would be.

I would say that the Neverwoods was where the majority of the event took place, with the main stage (The Fortress) being situated there. It was there that the headline acts performed, in this year’s case the amazing Clean Bandit and oh so popular Bastille.

The Circus was the tent where growing stars played, where Years and Years were originally discovered. This year, Hollie Cook, Girli and Yonaka were the stars in the rising. So, for me, the smaller bands offered a diverse range of musical talent and genres, with everything from pop, indie, folk, rock, reggae and dance to the soul of the 60s.

For more intimate and quieter places to visit and to break from the overwhelming amount of music on offer, there was the Wendy House Stage and the Rainbow Room. The former featured acoustic sets and stand-up comedy: a hidden treasure, tucked away amongst the trees surrounding a lake just off the main farm grounds. 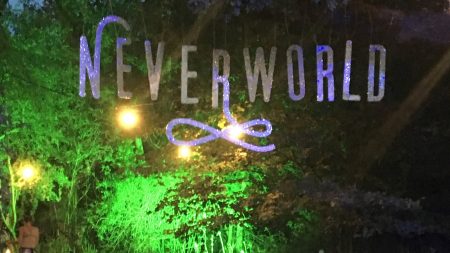 The Rainbow Room, meanwhile, was located in one of the other of the three grounds, in Mermaid Lagoon. This was converted into a day time cinema, which provided us with a comfortable and relaxing break from strolling around outside in the sun. We allowed ourselves to watch the screening of Starsky and Hutch whilst sitting on the rough dry grass, but grateful for the shade the tent offered us.

By night, however, the place was entirely transformed into a drag club (the Shift Drag Cabaret) – one of my favourite places to dance the night away in. It was the place that I can only describe to be every Rupaul’s Drag Race fan’s dream. Next to this room was The Beach, which by day would be the venue for Hoola Hoopers, meditators and Swing Dancers, but by night would be the home for DJ’s attracting late nighters for a night club themed evening with a soundtrack of disco and garage music.

“Glitter was everywhere, of course, and the costumes blew me away”

Skull Ridge, was home to the anarchistic and steam punk Pirates tribe, where the target audience was for rock and heavy metal fans. It was there that you could find casinos and burlesque clubs in the intriguing Goldmine and Gentleman Starkey’s. Cave-like as they were in the 30 degree heat, they couldn’t be missed, or at least were a must see at some point in the days.

Hook Rock was where we were mostly attracted to: the dive bar where live rock and punk music was played. Muffin, a local rock band who we saw perform in the early hours of the second day, was one that I remember the most for their incredibly immersive and enthusiastic performance. Glitter was everywhere, of course, and the costumes blew me away. One bunch of friends came as the main characters from The Little Mermaid – I’d say a picture would be worth a thousand words on this one. 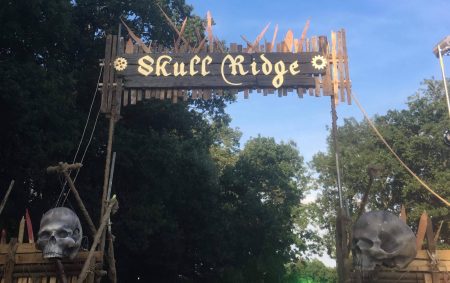 As someone who had never heard of Declan McKenna before (I know, it is shocking) I was won over by his down to earth personality and his engaging indie rock music style, as he performed on the second day. ‘Paracetamol’ and ‘The Kids Don’t Wanna Come Home’ were the songs that really got the crowd going. The visual effects off the main stage also created atmosphere, especially for Clean Bandit’s performance that followed, the main reason why I was so eager to attend this particular festival.

Their performance was all I could have hoped it to be: every hit song was played to perfection, with the vocals and instrumentals mimicking the actual CD recordings. The band knew how to connect with the crowd both through their amazing vocals and engaging personalities.

The final night ended with a bang as we were all revved up to see Bastille perform on the main stage. After an afternoon of vintage shopping, we decided to try out the freshly made falafels from a near-by stall for that night’s dinner. It was definitely worth it, as we cosied ourselves on the grass whilst listening to Tom Grennan play his pop, indie and alternative rock styled songs.

“Bastille proved to be a hit”

Bastille proved to be a hit, for the crowd went wild jumping with excitement. The closing song – the 2013 indie pop hit ‘Pompeii’ was the cherry on top of the cake. To finish our night, we hit the Rainbow Room to watch the cabaret/drag race and Tinkerbell’s Tap House to dance to the soul of the 60s.

We returned to the campsite after an incredibly satisfactory evening. Overall, with the range of tasty food, talented artists and countless activities (most notably the dodgems for all ages), the weekend was one I will never forget. I truly felt it to be a festival that will never grow old and I hope to return to it next year.

Interview with Circa Waves at Y Not Festival 2018