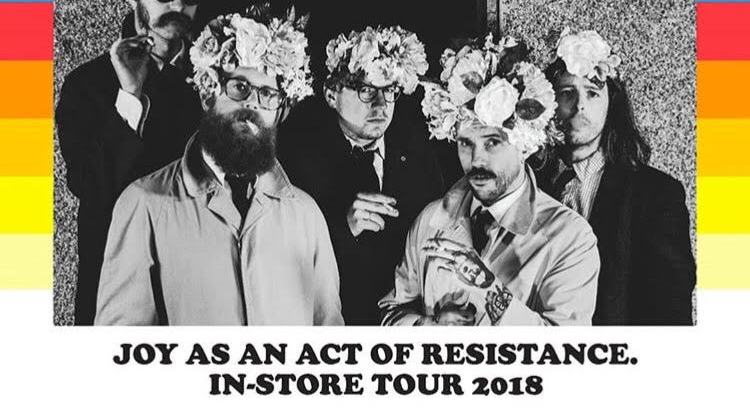 In a small attic room, tucked away at the top of Rough Trade, IDLES took centre stage after the release of the critically adored Joy As An Act of Resistance. Before the gig the audience learned that the lead singer, Joe Talbot, had a cold yet, perhaps due to the heat of the room, perhaps the energy of the crowd, he seemed undeterred.

Their opening tracks were the two introductory tracks from the newest album. As openers, these tracks set the tone for a night of huge walls of sound.  These moments feel made for venues of a much grander size, yet as a mosh pit built to cries of “I’m like Stone Cold Steve Austin, I put homophobes in coffins“; the energy was electric.

“The gig became a request night”

As the energy grew, and with the introductions out of the way, they turned their focus onto the crowd. With a thank-you for coming and an admission that “the only reason we can be here is because you care enough to pay”, the gig became a request night. Talbot often stepped out into the sweaty crowd to ask each individual three questions: “Who are you, where do you come from and do you know any IDLES songs?” the answer to which was most oftentimes a coy “one or two”. The band was never afraid to make the leap from stage to pit, extending their community ethos to performing a number of the riffs in the middle of the crowd. Talbot even took the time to hang upside-down from the rafters and scream “the best way to scare a Tory is to read and get rich“.

“They are brash, bold, and punchy, fuelled by a need for release”

This atmosphere may sound unsafe or angry, but it never veered into threatening, it remained joyous. IDLES’ performances, just as much as their albums, are ones for catharsis. A communal purging of the frustrations and pressures of invasive relationships and toxic masculinity of being told we’re not good enough: “I’m a real boy, boy and I cry, I love myself and I want to try”. They are brash, bold, and punchy, fuelled by a need for release. IDLES make it clear they are not an angry band, despite there being a lot to be angry about, they’re a band of catharsis.

A difficult moment for the band came when they were asked to do their rendition of ‘Cry to Me’; a song from Dirty Dancing, and one of the band’s favourite films. As this was the first time they’ve played it live, they were apprehensive, but the chance to have a well-timed breather was enjoyed by everyone attending, not least the drummer. Reinforcing the band’s message of fun and joy over all, they’re not a band that’s loud and brash for brashness’ sake, there’s thought behind the carnage.

Talbot was at his frenzied best when singing ‘1049 Gotho’, a retelling of his conversations about mental health. Giving him a chance to ask the audience to speak out more and be kind to themselves, in light of the recent death of his daughter Agatha, this message was given deeper poignance. The intensity of the lines “There’s no right side of the bed with a body like mine and a body like mine”hit hard.

Whilst it may sound macabre, the frank honesty of this band, to so succinctly scream these words to such gnarled and crunchy guitar riffs, is freeing. And with the track ‘I’m Scum’, the watching crowd reached its noisiest. It is essentially a celebration, a reclamation, of all the things people have said to the band in the past given their staunchly anti-Tory stance.  Initially suggested by a younger female member of the audience, the band hit out at those in the crowd that chose to shout over her to get their own request out.

The idea that they have to write a new album to sort that out was met with applause. A roar of “this snowflake’s an avalanche” filled the venue as the concert reached its crescendo. Finishing with ‘Samaritans’, their anthem decrying toxic masculinity, the, admittedly mostly male, audience revelled in the chance to purge those expectations: “The mask of masculinity, is a mask, a mask that’s wearing me”.

With the concert over, the intensity died down but the community prevailed. Men and women shoved aside in the mosh collected their things, one band member returned a bag full of vinyl left by a man in a suit, now dripping with sweat. The mood was joyous and there was an overwhelming sense of relief, as much because they were now letting a draft in as anything else. IDLES at Rough Trade was chaotic, sweaty, carnivalesque. This was deliberate: in these trying times for leftist Britons, joy has become IDLES’ ultimate act of resistance. And on 5th September it was this message that was screamed with ringing clarity from the attic of Rough Trade.

Their latest album Joy As An Act Of Resistance is available now.