Riding the wave of female led indie ballads, Soccer Mommy is another success story of self-made musicians who use the internet as a way to promote their music.  Now with an international audience, Soccer Mommy arrived to a buzzing crowd at the Bodega. Her mass appeal was reflected in the crowd dynamic, all ages and styles were covered, and all were excited to see the Nashville singer take to the stage.

But first it was filled by up and coming UK-based singer, Brooke Bentham. Standing with just her guitar against the dimly lit back wall, Bentham’s voice hit crystal clear highs. She performed a number of stripped down renditions of her own songs, intensely looking out into the crowd who watched earnestly.

Her music ranged from the softer, sadder ‘Out Of My Mind’, which reflectively discussed love and the pain it can bring, to ‘Heavy and Ephemeral’, evoking Fleetwood Mac and surprising much of the audience with the change of tone. This final song was perfect for The Bodega, it had the taste of new talent and filled the intimate venue. Though the crowd remained quiet for most of her set, she commented on it in surprise at one point, it was out of respect rather than a lack of interest. Bentham was less confident on the stage than the headline act, but her talent was notable and she is well worth a listen.

Soccer Mommy stepped forward as the night edged towards 9pm, Sophie Allison standing a head smaller than the rest of her band with a wide smile on her face, dominating the stage. She joked about the nightmare gig that they had endured in Liverpool, thanking Nottingham for their warm welcome. The venue is small enough to open up a discussion with the crowd, Allison discussed her lunch and the availability of tropical Red Bull in the UK. Allison was charismatic and bashful, leading into the songs with tentative questions about whether the audience knew them.

Soccer Mommy’s sound evokes vintage rock ballads, guitar heavy with emotive lyrics and haunting vocals. There’s a balance of the grungier sounds that show Soccer Mommy’s bite, but with the sweeter moments that reflect the heart ache of her lyrics. The most intimate moments came when the band left Allison on the stage on her own, with only her guitar to back her delicate vocals. The crowd were attentive, earnestly listening as she moved through the bittersweet songs. One of the stand out moments was the cover of Bruce Springsteen’s ‘I’m On Fire’, slower and more vulnerable than the original. 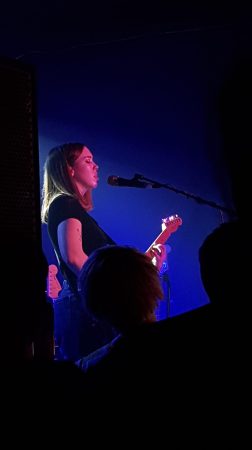 The band returned for the end, closing the set with ‘Scorpio Rising’ which had an anthemic feeling with its building beat and return of the heavier guitar.  The song comes from the latest Soccer Mommy album, yet many of those in the crowd sang softly along as Allison tenderly sang with her eyes closed. The lyrics have a reminiscent feel, and the audience were undoubtably relating to the yearning of the song. This was a highlight of the evening, all eyes on Allison as she guided her band through one of their most iconic songs.

“It was a bit underwhelming after the build”

After a short break, the band returned to the stage for an encore, chanted on by the crowd. Allison asked if anyone remembered the old Bandcamp days and pulled out one of the band’s very first songs. Whilst this was a nice hark back to the earlier sound of the band, it was a bit underwhelming after the build of ‘Scorpio Rising’. Perhaps ‘Your Dog’, which was played to much applause earlier in the set, would have been a better choice for an encore, allowing the audience to sing along one last time before the band retreated from the stage for good.

Soccer Mommy hypnotised the crowd with their alternative rock ballads, moving lyrics and charm. Throughout the night, I found myself smiling in response to Allison’s wide smile, and I was completely enchanted by the experience. Whilst a few more upbeat songs may have been needed to lift the atmosphere of the room at some points, the overall take away from the night was that of bittersweet music and vocal talent. I found myself sat in a cocktail of emotions, I had followed the emotions of the lyrics yet was thoroughly buzzed by Allison’s charismatic presence.