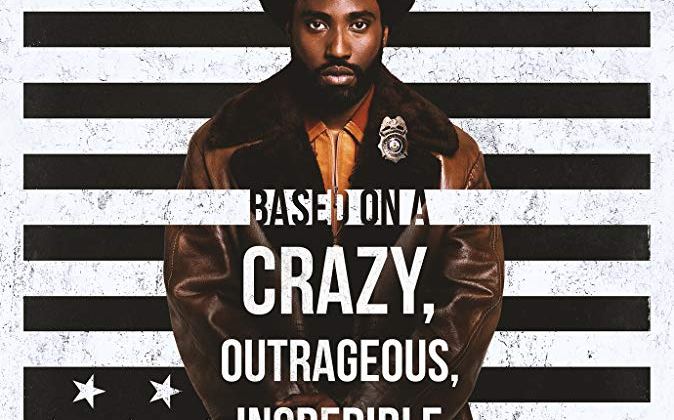 Released into a climate of uncertainty and simmering tensions, Spike Lee’s Klan based comedy-drama is a funky and significant interrogation of the nation’s definitive cultural conversation.

Lee is a filmmaker whose career has been dominated with issues of race, cultural heritage and the role of the African-American experience in modern American society, with films such as Do the Right Thing and Malcom X. The latter found Lee taking charge of biographical narrative, steeped in historical and contemporary commentary. With BlacKkKlansman Lee is striving for the same thing. He pitches his tent in the 1970s and the remarkable true story (“fo real, fo real shit”) of instinct driven Ron Stallworth (John David Washington), the first African-American officer in the Colarado Springs Police Department and unlikely infiltrator of the local branch of the Ku Klux Klan.

After posing as a racist white fellow with a burning hatred of all non-“Anglo-Saxon Protestant” white races under the American sun by phone, and giving away his real identity, Stallworth embroils the department in an undercover investigation of the Klan Chapter with fellow officer Flip Zimmerman (Adam Driver) posing as the white Ron Stallworth in person. As Ron works his charisma by phone, eventually coming into contact with a young David Duke, then the group’s grand wizard, Flip comes under threat himself as prominent Klan members begin to suspect his hidden Jewish heritage.

At times deeply comical, at others horrifying, BlacKkKlansman’s script is stellar, using a beautifully paced and absorbing story to explore America’s racial history on a fluctuating thematic timeline of past, present and future. Its 70’s present depicts a time when, in an early scene Rod is subjected to smirking fellow officers asking him to fetch case-files on “toads” rather than African-Americans – the racial expletives and antisemitic slurs getting progressively more explicit throughout.

“Lee alludes to the scale of America’s racist history”

Lee pulls no punches, showing one scene in which a white power husband and wife lie in bed discussing their dream of “killing N-words”. At the same time however, the director invites his audience into the inner workings of the Black Power movement, using smart cross-cutting and split screen editing to show two very different organizations in ideology and morality. One fighting for a voice, the other screaming that theirs be the loudest.

In recognition of the past, Lee alludes to the scale of America’s racist history. At one stage we see a group of Klan members, hysterical, almost frothing at the mouth, whilst watching D.W. Griffith’s haunting 1915 picture Birth of a Nation. The use of clips from that film which itself depicts past events, glorifying the founding of the first Klan in 1865, serves as a sobering and hard-hitting reminder of the media’s persisting role as a propaganda tool and emotional catalyst in the nation’s racial dialog.

Other moments point us to America’s future, it’s murky present-day, a contemporary omnipresence that haunts the film till its very end. Cross cut scenes of “white power” and “black power” echo 2017’s rallying cries of the “All Lives” and “Black Lives matter” movements. The movie’s topical themes, though heavy, are largely subtly embedded into the narrative, save for one slightly ham-fisted conversation between Ron and one of his colleagues discussing whether someone who embodied the ideals of white supremists could ever become president. If this was a little forced, the film’s final transition to Charlottesville footage, by far containing the most visceral imagery in the movie, is measured perfectly to leave the audience trundling outwards stunned and deep in thought.

BlacKkKlansman’s heavy commentary is buoyed by a soulful soundtrack and irresistible period attention from costumes through to hairstyles, whilst conversations about the Blaxploitation hits of the time reflect its fast paced and unapologetically cool visual aesthetic and comic style.

The movie’s performances also aid this success. John David Washington is perfectly cast, giving a cool, winning performance in the central role. Likewise, Driver shines as the Jewish-born straight man, himself playing a role as an undercover Klansman, having to talk the lingo of a fully bonified white supremist. Whilst Topher Grace, Laura Harrier and Jasper Paakkonen are all excellent as part of the supporting ensemble.

Courageous, excellently made and with moments of biting satire and raw honesty, BlacKkKlansman is without a doubt one of the best films of the year thus far – as well as quite possibly one of the greatest achievements of Spike Lee’s tumultuous yet vital career. See it.

Featured image courtesy of 40 Acres & A Mule Filmworks via IMDb.