Can the University of Nottingham repeat last season’s success in American Football?

Impact's Jake Rigby interviews UoN's American Footballer, Morgan Lambert, who provides a breakdown of the sport at the University. 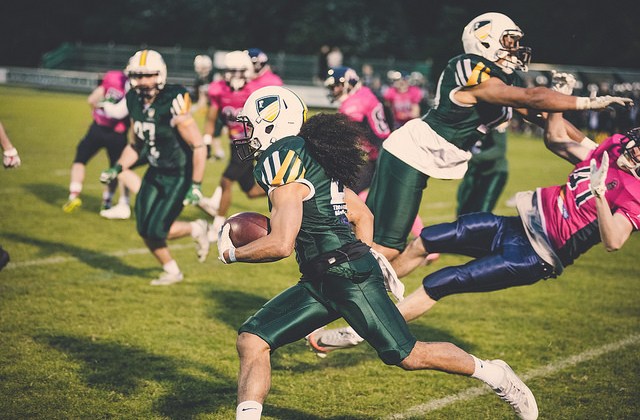 The NFL is often associated with smashing tackles, incredible throws and athletic players, but the actual understanding of the rules and tactics is often missed. It is a rapidly growing sport universally, and it is about time that we profiled the success and the hard work of our current and newly promoted University team, as they tackle life in the Premiership for the first time ever. Having defeated Nottingham Trent numerous times last season and in Varsity, their rapid success in their regular season was often overlooked, but now the current team is considered one of the best American football teams the University has ever fielded.

To help with all the jargon, we have profiled one of the current players, defensive back Morgan Lambert, to talk us through it. Morgan’s pathway to the sport has been unique; having impressed in first year as a rookie, he is now coming back from a tough ACL injury.

“You have to be strong and athletic for most positions, but above all there has to be a hunger and desire.”

How does the game work?

ML: “Similar to regular football at any one time, teams can only have 11 players on the field. There aren’t halves, rather four quarters of 15 minutes on a 100 yard pitch. There are three phases to the game, so the squad is split into 3: we have an offense, a defence and special teams. The squad size is much bigger than the average team squad. There is no limit to our team squad.”

“The aim of the game is to score a touchdown in the opponent’s end zone (a goal area) for 6 points. There are 4 downs (four opportunities) to get the ball 10 yards or more up the field at a given time. If a team can’t get the ball more than 10 yards after three attempts they normally elect to try and kick a field goal for 3 points (like a penalty kick in Rugby) or punt the ball back to the other team way down the field. The offense naturally tries to score the touchdowns, the special teams are in charge of the kicks and receiving them, and the defence tries to stop the other team from scoring a touchdown.”

“Players are always welcome to come down to one of our training sessions, which are Tuesdays and Thursdays 8:30-10:30pm on DRSV, and Sunday 10am to 1pm.”

What attributes are needed to succeed?

ML: “A willingness to learn and being a good team mate like any other sport is necessary, as well as a competitive streak for sure. You have to be strong and athletic for most positions, but above all there has to be a hunger and desire. You can’t go too far wrong. We all played regular football since we were young, but with this we start playing at university level so it is imperative we listen to our coaches as they know a lot more than us!”

How can students get involved?

ML: “We have a contact American Football Team and a Women’s Flag Team. Players are always welcome to come down to one of our training sessions, which are Tuesdays and Thursdays 8:30-10:30pm on DRSV, and Sunday 10am to 1pm.”

What is the goal for this season and your own personal goal?

ML: “The team are ready and prepared to make a strong challenge for the national championship. Personally, after a lengthy time on the side line last year, I want to get fit enough to contribute to the team this season.”

There is certainly an excitement around the team this year as they attempt to go into unchartered territory, and battle in a higher division. It was a fantastic year for the University teams in 2017-2018, with the American Football team being one of many hoping to carry this on into the new season. We will be sure to keep you posted on how they get on throughout.

Featured image courtesy of University of Nottingham Sport via Flickr, with DGTL Concepts.