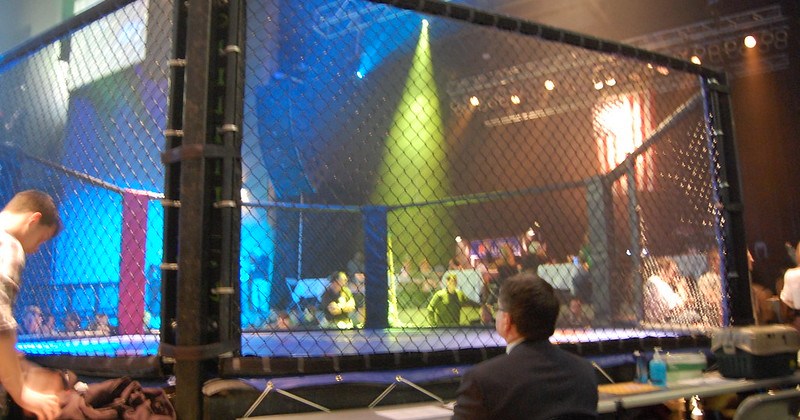 In what should have been Khabib Nurmagomedov’s career highlight on Sunday morning, all the focus was instead on his atrocious actions immediately after the fight was finished. After beating Conor McGregor via a fourth round neck crank, Khabib then immediately jumped out of the cage to go after McGregor’s camp member Dillon Danis. Chaos quickly ensued. The event turned into a full on brawl with a brother of Nurmagomedov and a friend jumping into the cage and hitting or attempting to hit McGregor. McGregor appeared to initiate some of these conflicts after Khabib jumped the cage, before he and his team were quickly escorted out.

Even though Khabib’s streak of consecutive rounds won was stopped at 31 in the third round, he largely controlled the contest. Nurmagomedov took Conor down in each of the first two rounds and controlled him, doing serious damage that could have finished the fight in the second. In the third, McGregor got back onto his feet and gathered some momentum, keeping his opponent off him and landing some stinging shots.

The fourth round was where things came to an end, Khabib securing the takedown and working his way to back mount and a face/neck crank and getting the tap. This should have been it, with the undefeated Dagestani fighter defending his UFC lightweight championship in fairly convincing fashion. Instead the brawl broke out, completely distinguishing the triumph of his victory, and putting a black mark on the sport and possibly significantly impacting Nurmagomedov’s career at worst.

“When you promote this fight in large part using the footage of this attack, you forfeit most of your rights to decry Nurmagomedov’s actions”

It took teammates Luke Rockhold and light heavyweight and heavyweight UFC champion Daniel Cormier to eventually calm Khabib down with some serious effort. Nurmagomedov was even telling UFC president Dana White that he was ok with being arrested as long as he got his belt, the ultimate symbol of his victory over McGregor. This did not come to pass, with White being worried about the crowd reaction. So Khabib was escorted to the back as well, with some drinks and other debris being thrown in his direction. He did eventually receive his championship before the post-fight press conference where he defended his actions.

These scenes were the inevitable result of the UFC consistently playing with promotional fire. McGregor has headlined four of their five largest grossing pay-per-views, promoted with barbs that can only be described as racially insensitive. That’s not including this contest and his boxing sojourn. Sooner or later he was going to come up against an opponent that he couldn’t knock out, or someone who did not accept this as part of the promotional game.

This was all fed by the UFC, not pushing back at all on this language from their cash cow and rewarding it at every turn. After throwing a dolly through the window of a bus that Khabib was on in April, McGregor was rewarded for this fight with a shiny new deal and a sponsorship deal for his new Proper 12 whiskey brand. It must be mentioned that Khabib did incite this by cornering McGregor’s longtime friend and teammate Artem Lobov with a massive group of associates, which is not uncommon behaviour for the Dagestani.

When you promote this fight in large part using the footage of this attack, you forfeit most of your rights to decry Nurmagomedov’s actions here. You lose even more when you stood by as McGregor jumped into the crowd at UFC 189 to scream at Jose Aldo to build that fight. The UFC also seemed to be ill equipped for the possibility of any trouble at this fight. This kind of brawl has happened several times before in Russian MMA and all sorts of tensions were stoked before this contest.

McGregor also obviously provoked these seriously regrettable actions by Khabib. Leading up to this fight he played into the ethnic tensions between Dagestan and Chechnya, he mocked devout Muslim Khabib’s religion, he insulted his father and even went after the association the Nurmagomedovs have with Ramzan Kadyrov and currently on trial businessman Ziyavudin Magomedov. The second man to attack McGregor in the cage was a Chechen fighter whom McGregor said was committing treason and not being a true Chechen man for taking orders from a Dagestani, who has since bragged on social media about living up to his promises.

McGregor also potentially faces a sanction for his reaction to the members of Nurmagomedov’s corner, who attempted to fight him in the cage. In the past when he has stepped into the regions of racist remarks or otherwise bigoted comments, he has either knocked his opponent out, such as his colonial barbs before knocking Jose Aldo out in 13 seconds, or his opponent has known entirely that this was purely promotional, like with Floyd Mayweather. Sooner or later this playing with fire was going to burn the whole enterprise down.

Khabib Nurmagomedov is a man who was literally on the wrestling mats where his father was coaching before he could walk, as a child he wrestled a bear cub and is from a region that had serious religious and ethnic problems for centuries. There is a reason this has happened several times in Russian MMA. Men in a region with little social mobility are funnelled into athletics as a way to give them purpose and keep them away from extremism. This is not a man who will take this as all fun and games. Nurmagomedov jeopardised his future ability to get a visa by doing this, and his associates will likely have the same problem in the future. This could have seriously hampered his career prospects.

Throughout the build-up to the fight, Khabib was calm and promised simply that he would punish McGregor in the cage. He lived up to this and would have had universal backing if he had left it there. However, the disrespect from McGregor was too meaningful to Nurmagomedov and he became the villain, leaping out of the cage to go after Conor’s associate and that will be all that is remembered from this night. In all likelihood this footage will then be used in order to sell a rematch after a suspension for Khabib, much as the bus in Brooklyn was used to sell this fight. No one involved will learn anything from this, there is too much money to be made by all parties.

Featured image courtesy of fightlaunch via Flikr. No changes were made to this image. Image license found here.

Can the University of Nottingham repeat last season’s success in American Football?