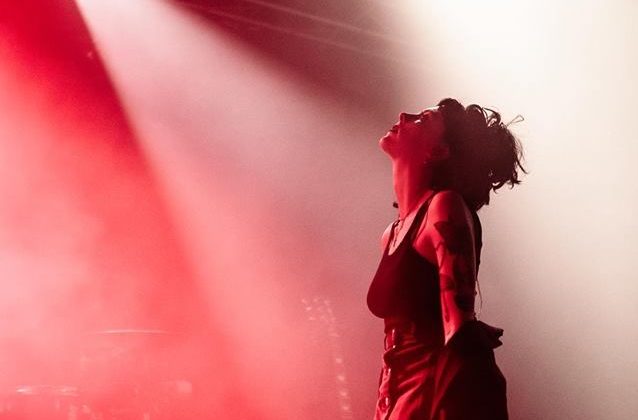 Following the recent release of their debut album My Mind Makes Noises, Pale Waves set off on their headlining tour and graced the stage of Rock City with their visually dramatic and musically incredible performance. Sweat levels were high and the mosh pits were unstoppable: I doubt anyone left the building willingly when the gig came to an end.

Having seen the band previously at Y Not Festival, I was looking forward to reliving the moment, but in a space and crowd wholly dedicated to them. Pale Waves are viewed by some as inhabitants of The 1975’s shadow through being their support act on tour last year and sharing their record label Dirty Hit; but one thing that definitely stood out to me at this gig was that there is no way the four-piece band could fit in anyone’s shadow.

“Hardcore fans together in one sweaty room to appreciate good music”

There was already a queue forming when I arrived at the venue at 6pm for my interview with lead singer, Heather Baron-Gracie, and when I returned to the outside world only half an hour later, it had more than doubled. What’s all that talk about shadows? This was the first sign of what to expect from the gig: many hardcore fans together in one sweaty room to appreciate good music.

We caught the end of King Nun’s set, Pale Wave’s first warmup band who are also signed to Dirty Hit, and I was in awe of lead singer Theo’s ability to jump manically around the stage and off the equipment whilst still being able to play the guitar and sing – that’s a talent in itself.

Next came Swimming Girls. Reminding me a bit of Wolf Alice, they took over the stage very comfortably and induced the first mosh pit of the night – and it wasn’t even 9pm yet. ‘Back of Your Car’ was one of their songs that particularly stood out for me and Vanessa Gimenez’ unusual yet brilliant voice, along with the rest of the band’s vigour, kept the crowd buzzing; it was just a shame that a lot of the audience ended up talking through their set, probably eagerly anticipating the entrance of the main act.

And, oh boy, was their entrance dramatic. After a lengthy blackout followed by strobe lighting, flashing white lights, spotlights and a telling red lighting, Pale Waves came onto the stage to the delighted cheers of the crowd (and my overly enthusiastic wooping) after much tension had been built.

“It was hard not to sing and dance along”

They kicked off their set with their second single ‘Television Romance’ and already the mosh pits had begun. It was hard not to sing and dance along and the combination of the transfixing lighting, the slickness of the band and Baron-Gracie’s voice ensured that standing still was not an option.

Smashing the opening to their show, they continued to ace each song, going through the classics ‘Kiss’ and ‘New Year’s Eve’ before Baron-Gracie shouted “Let’s f*****g do it” and launched into ‘Eighteen’. And they f*****g did it.

“Underneath these catchy pop melodies, the hard-hitting lyrics certainly lingered”

Although they played most of their songs from My Mind Makes Noises, I noticed that they mainly stuck to the upbeat ones, missing out the extremely emotive ‘Karl’ and ‘When Did I Lose It All?’. There was only one instance when Baron-Gracie apologised for performing a sad song (‘She’) and quickly returned to ‘happy’ ones with ‘Came in Close’ – the clean finish stuck with me for far too long. However, underneath these catchy pop melodies, the hard-hitting lyrics certainly lingered and hearing them sung live by Baron-Gracie made them all the more affecting.

Baron-Gracie plays such a key role in the song-writing process and the leading of the band, but she couldn’t have a more suitable trio alongside her to create the unique vision and sound of Pale Waves – it really came alive in their performance. Baron-Gracie and drummer Ciara Doran’s ‘goth-like’ appearances and wacky dancing, along with guitarist Hugo Silvani and bassist Charlie Wood’s indie selves, cemented their unusual stage presence.

The band’s unmissable unity was highlighted by their incredible musical talent individually and as a group. This unity was infectious, with the crowd singing out the chorus of ‘One More Time’ together, moshing crazily to ‘Noises’, one of my favourite performances of the night with its red flickering lights, and later chanting “one more” to bring on the encore.

“A performance that outdid their recorded music”

Pale Waves surpassed my already high expectations with their energy, Baron-Gracie’s powerful voice and a performance that outdid their recorded music – a tough feat. I didn’t want to leave Rock City in fear of losing that concert feeling you get with only the best bands, but the spectacle of their performance with the insane lighting and raw talent will stay imprinted on my brain until next time. In the words of the guy in front of me: “That was f*****g sick”.