Alex takes a look at some of the results from the first few weeks of fixtures and UoN's current standing. 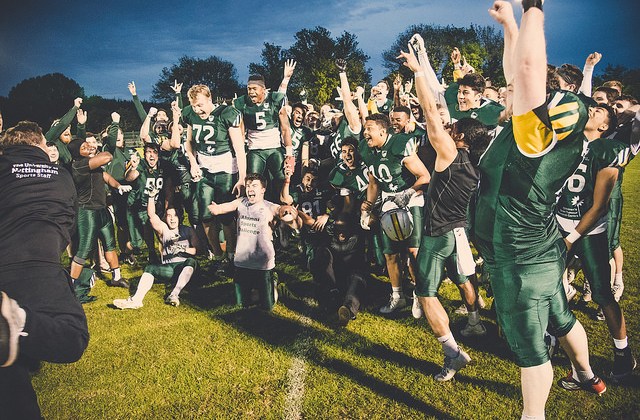 As the academic year gets into full swing, so does a new season of BUCS sport. UoN have increased their reputation as a sporting university in recent years, finishing fourth in the BUCS standings for the past three years and winning the title of Sports University of the Year from The Times. On top of that, with BUCS Big Wednesday returning to David Ross Sports Village on 27th March, the Green and Golds will have an extra incentive to get to the finals of the University competition on home soil.

The mission to reach those finals has got off to an ideal start. After the first few weeks of competition, the University of Nottingham’s projected points total of 2229 puts them at the very top of the standings, ahead of sporting powerhouses including Loughborough, Durham and Bath. Tennis has led the way in scoring so far, with 259 points from Nottingham’s 13 teams. The men’s and women’s first team have led the way, with the former winning every one of their three matches 12-0, whilst the latter have dropped just two matches in their three successes so far.

Following close behind those triumphs has been the Green and Gold’s hockey sides, who have contributed 248 points from their 12 sides. The women’s first team suffered an agonising 3-2 defeat to Loughborough in last year’s championship final, and have made a perfect start in their bid to go one better this campaign. UoN have won all four of their games so far, including a 2-0 win against Leeds Beckett last week, to set them up well for a rematch with Loughborough at the Nottingham Hockey Centre on October 31st.

Their counterparts in the men’s first team have also made a solid start to the season, with a 3-0 triumph over Sheffield Hallam last week leaving them second behind city rivals Nottingham Trent in the North A standings. They will look to close that gap when they also face Loughborough at Nottingham Hockey Centre on Halloween.

Table Tennis has also continued its strong contribution to the success of UoN sport. After student Maria Tsaptsinos was selected for the English Commonwealth Games team in April (winning a bronze medal in the team event), the Green and Gold are showing no sign of a decline in form for 2018/19, putting 222 points on the board in the first few weeks. The men’s first team cruised to a 10-0 win over UCL in the BUCS final last year, and are looking good for another successful season after making light work of Edinburgh and Sheffield in 17-0 victories to start the season.

BUCS | Congratulations to our BUCS teams who won 66% of their games this week!

The sport has also shown significant strength in depth, with the men’s second team also tasting success last season with victory in the Trophy final against Derby. They have also made a strong start to the new season, with wins over Loughborough and Coventry in Midlands 1A setting them up for a UoN clash with the third team at David Ross on October 31st. The women’s first team are also off to a flyer in their Midlands 1A campaign, winning three out of three as they aim to gain promotion to the top tier of BUCS competition.

Another racket sport that has brought great success for the Green and Gold in recent years has been badminton. Both the Nottingham women’s first and second teams reached the championship and trophy finals on home soil last year, but both fell just short in defeat. The 1s lead the Premier North after four games, with an opening draw with Loughborough the only fixture they failed to prevail in, whilst the 2s are unbeaten in Midlands 1A, putting both on track to avenge their final defeats from last season. The year has also begun brilliantly for the men’s first team, with three consecutive 8-0 wins over Durham, Worcester and Birmingham setting them up for a strong season in their own Premier North campaign.

Congrats to our Women's 1s who won their home match 5-3 against University of Birmingham 1s! ???@UoNSport#WinningWednesday #GreenandGold

Squash has proved to be one of the Green and Gold’s best sports, with UoN represented in all four of the BUCS Finals in March, winning three out of four after being edged out by UWE in the Men’s Championship final. Both the men’s and women’s second teams are unbeaten in their Midlands 1A matches, putting both in contention for promotion to the Premier competition. The first teams are yet to get their title pushes underway for 2018/19, with the women’s side starting at Manchester on November 10th, and the men’s side at Newcastle on the same day.

Elsewhere, the men’s basketball first team have had a mixed start to their debut campaign in the top flight of BUCS basketball. The Green and Gold suffered heavy away defeats to last year’s finalists Loughborough and Northumbria, but a home win over Durham, which saw the team overcome a fourteen point deficit in the third quarter to win 85-79 leaves the side in third place. The women’s first team currently lead Midlands 1A, with a 77-43 victory over Cambridge last time out suggesting a good season could be on its way.

2018-19 is shaping up to be a special year for the Green and Golds in the BUCS competition. Although the likes of Loughborough and Durham will be as good as ever, with strength across a host of sports and strong results in the opening weeks, UoN look set to be able to compete with them across the season.