It is a cold, misty night, and an icy wind blows. A perfect night to go hunting ghosts in the creepiest locations Nottingham has to offer. Is the chill I’m feeling on the back of my neck the cold dead breath of a restless spirit? Or is it just time to accept that summer is finally dead and buried? As I was never allowed to celebrate Halloween as a child, I now approach Halloween with the unbounding enthusiasm of a 4-year-old trick-or-treater on a sugar high. Although a sceptic of the supernatural, I still found myself both excited and alert delving into the gory past that Nottingham has to offer. Perhaps tonight would be the night I have my first encounter with a ghost.

If you want the chance to experience your own ghost encounter this Halloween, head to these five spine-tingling haunted sites.

Although you won’t find this on a ghost tour, this is the spot all students must go if you want a truly blood-curdling experience. The almost 100-year-old room has held the trauma of thousands of distressed students taking their exams. You may see anaemically pale figures shuffle into the room. You may catch their hollow, tired eyes as they scan the room for their seat, or hear the incoherent mutterings of half-remember revision notes.

Hold your breath and hear the quiet scratching of frantic pens under the ticks of the clock. You may even hear the internal wail of an unfortunate when reading the first question of an exam paper. These ghouls are best spotted in January and May for the full terrifying effect of this hotspot, but the room may still be disturbing enough to visit this Halloween. Like the spirit of the dead baby, this room may result in remembrance of traumatic memories, so explore at your own risk. Safe ghost hunting, and happy Halloween! 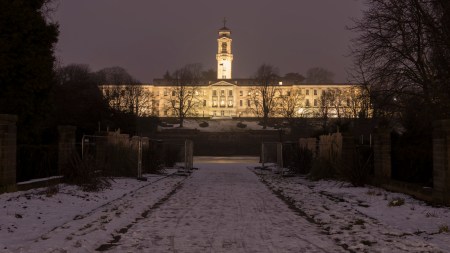 Now an innocuous-looking home on Castle Gate street, three hundred years ago this was the site of a den of iniquity. The booming brothel was then banned, but not before a terrifying – or terrified – spirit was trapped in its walls. Literally.

More recently, the building became a council office, but the council staff reported that they could not work in one room without experiencing extreme terror, flashbacks of their worst moment in life, and vomiting. When the room was taken apart for bug extermination, exterminators discovered the skeleton of a baby girl.

It is speculated that the child’s mother was a working girl, and the baby murdered to protect the business. The poor child may have died in terror, bricked up still alive into the walls. The trauma of the newborn infected the room, unable to articulate her pain, only radiate her spirit’s horror to the living. Once the baby received a proper burial, the dementor-like atmosphere of the room lifted, and no further problems were reported. Although I am still sceptical of paranormal presences, this spot really turned my stomach in a way the other locations didn’t manage to.

“Her body was hidden in the caves”

It appears that ghosts love to drink! Another apparently haunted pub, Ye Olde Salutation is reportedly home to up to 65 ghosts, so you’ll be sure to see one here! I’ll admit, descending into the dark caves below, the air becomes thick and cold. It is easy to imagine, in the trick of the light, the menacing shadow of a murderous highwayman that froze to death hiding in the well while pursued by the law.

Although the caves should remain at a constant temperature, the highwayman’s presence is said to freeze the room, and for the first time on this hunt, I start to think my shivers might be something other than natural. Other ghosts that live in the pub include a former owner of the establishment who committed suicide, but could not give up his home, and a four-year-old Victorian urchin, Rosie, murdered in the pub. Her body was hidden in the caves, and some people are kind enough to leave the precious child toys and dolls to play with.

“Perhaps animals are better at sensing the supernatural than us”

Of course, there is enough family drama in the royals’ history to make Jeremy Kyle queasy. Their bloody history is said to have left many ghosts to wander the rooms and walls of Nottingham castle.

This is no suit of armour, but the ghost of a servant King John had suffocated in molten lead – maybe a death gruesome enough to leave an imprint on this world. 28 teenage boys, hostages of the king, have also been seen to hang from the castle walls, while the smell of death is reported to hang in the air. Perhaps animals are better at sensing the supernatural than us – a police dog, brought to an unexplicable disturbance detected by security systems in Gallery B, was traumatised by the empty room, his black fur turning bright white in terror of what no person could see. There’s a reason witches like to keep a cat about – maybe you should take Bertie the library cat along to your ghost hunt.

Featuring haunted objects such as a cursed model galleon that condemns every person who touches it to die, and a chair that impregnates the person or partner of those who sit on it, those sensitive to the paranormal have claimed to hear the heartfelt shriek of Queen Isabella pleading for her lover’s life in the oldest pub in the country – “Please, my son, be kind to the fair Mortimer!”.

Maybe this moment of anguish, the howl of the She-Wolf when Roger Mortimer was ripped from her arms by her own son, has been encapsulated for eternity in the very earth the inn stands on. Considering the macabre context, one may believe the event was traumatic enough to trap a tormented spirit. I was unable to tune into the cries of the queen. On the other hand, the price of drinks in this tourist magnet is enough to make you scream. 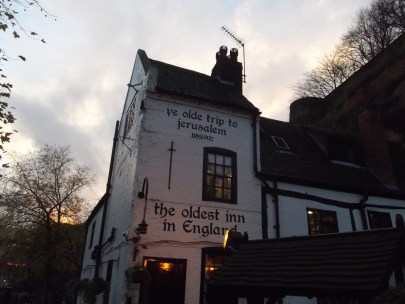