Behind the Scenes at NNT: ‘Yen’ by Anna Jordan

Lauren goes behind the scenes to talk to Director Ellen Dennis about currently ongoing production 'Yen' by Anna Jordan
0 November 15, 2018 18:16 by Georgia Butcher 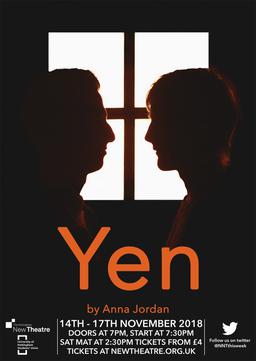 I had the exciting opportunity to chat with director Ellen Dennis about Anna Jordan’s Yen. Yen is Nottingham New Theatre’s latest in house production, and debuted on Wednesday 14th November.

What attracted you to directing Yen?

“After seeing a version of the play at the Edinburgh Festival Fringe this summer, I was immediately attracted to the script. Anna Jordan manages to tackle these incredibly heavy themes with both levity and depth with ease, creating characters that you sympathise with and disagree with at the same time.

Similarly, Jordan didn’t create caricatures – all her characters are well rounded, interesting people for any actor and director to get their teeth into.”

The synopsis warns that the play features many taboos including offensive language, rape, and victim blaming. Did portraying such instances present any challenges in the directing and staging of Yen?

“One of the main challenges of directing a play that features many taboos was ensuring that the actors were not overwhelmed by the script during the rehearsal process. There are certain moments in Yen that are especially emotionally draining for the cast, so staging those scenes with their welfare in mind took a lot of needed thought.”

What do you think your decisions as director have brought or added to this production?

“I hope that my decisions as a director have helped make these characters are real as possible. Likewise, I hope that I have given the script distinct changes in energy, from the fast-paced scenes of the first half into the more sombre, still moments towards the end of the play.”

How would you describe the tone and mood of the play?

“The tone and mood of the play changes significantly throughout. At the beginning, even the darker issues are brought to the audience with a lightness and comedy that makes it entertaining to watch. However, as the events of the play unfold, the tone is a lot more melancholic. All of the characters are heavily affected by what happens so the pace and tone shift to suit this.”

Is there anything you’d like the audience to take away from seeing Yen?

I’d like the audience to take away an appreciation for the opportunities they have been given if their upbringing wasn’t like that of Hench or Bobbie’s and to consider how these characters interact with the nature-nurture debate – is their character a result of their lack of care, their consumption of violent media and isolation or is what happens in the play something that they were capable of regardless.

Are there any scenes or moments within the play that you’ve been particularly proud of during rehearsals?

“To avoid spoiling the play, I can’t pin point the exact moment I’m proudest of, but there is one where the two brothers are chasing each other around the stage trying to get hold of a phone that sticks out to me as a proud moment. It’s so fast-paced and always well-acted by the cast.”

What has been your highlight of the rehearsal process?

“The highlight has to have been working with such a talented group of actors. Developing their characterisation and blocking the script with them, has been an amazing experience and so much fun!”

Rosa’s Recommendation of the Week – Zaap