Dodging (Drunk) Dudes in the Dark

The best ways to turn down someone in the club 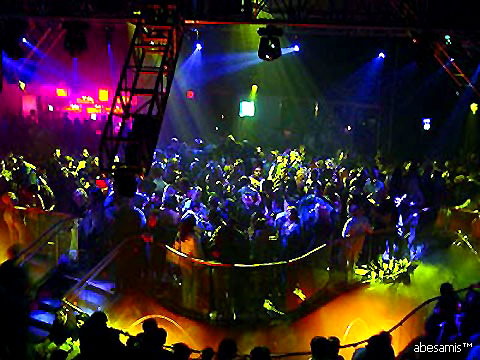 Now, before you read this and get the wrong idea about me, I want to clarify something: the methods listed below for turning someone down are not designed to cruelly reject a sweet guy or girl vying for your affections; these are for the annoying creeps who will not stop following you around the club. There are just some situations that require a harsher hand, or perhaps more appropriately, a harsher tongue.

It can be tricky, awkward and even intimidating to turn someone down, but sometimes it has to be done, so here are some (hopefully) fool-proof ways to do so.

This old classic simply involves grabbing your nearest friend and claiming the two of you are in a relationship. However, its popularity means people will respond to this technique with scepticism. My only tip to make it believable is to pre-arrange who your make-believe boyfriend or girlfriend will be and prepare some kind of signal/code-word so you’re both ready to go.

There’s nothing to make a perverted guy stick around than if he sees you trying to communicate the situation to your friend and decides he wants ‘proof’. It means you’ve been made and this is entirely for his own entertainment (in which case I would suggest a simple expletive or five to get rid of him).

If someone is being particularly determined about obtaining your number, my favourite response is to input a number into their phone that will get them into hot water with the recipient. For this, all you have to do is memorise any friend or family member’s number whom you think do a good job of putting them in their place following the first inappropriate message. Mothers can be particularly good at this, especially if they’re the no-nonsense, good-at-telling-off type, which most are.

This one takes me a handful of vodka shots to build the confidence to perform but never fails to be effective in shooing off an over-confident, over-tactile douche. You can get creative and come up with your own scathing jingle to chant at the offender (bonus points if it has hand gestures). Alternatively, you can steal my childhood go-to: ‘Whatever! Minger! Your mum works at McDonalds!’ I find this chant works best in response to someone disputing your initial rejection, but honestly it doesn’t matter if the chant doesn’t quite make sense in the context – it gets the message across.

The easiest way to pull this one off is to claim you need the toilet and then never return. This works best in clubs like Ocean or Ink, where the toilets have two entrances. You can exit without fear of being caught, rather than trying to sneak past the person waiting for you. The ideal timing for this play is immediately following someone purchasing you a drink but works whatever the reason you want to shake someone.

Featured image courtesy of fictures via Flickr. No changes were made to this image. Image license found here.

SHAG Week: What is it?

Behind the Scenes at NNT: ‘Adult Child/ Dead Child’ by Claire Dowie