Behind the Scenes at NNT: ‘Adult Child/ Dead Child’ by Claire Dowie

Earlier this week, I had the pleasure of going behind the scenes by sitting in on one of the rehearsals for the upcoming NNT production ‘Adult Child/ Dead Child’ which debuts tomorrow night.

Upon entering the rehearsal studio I was struck by the buzz of energy and the warm environment created by the cast and crew working on ‘Adult Child/ Dead Child’. The rehearsal was upbeat, with an intimate and amusingly light atmosphere as they all gathered around the loop pedal, trying to figure out how this mysterious device worked.

As it’s a one-person show, the only member of the cast present was Alex Piechowski who I witnessed performing some excellent hand-eye co-ordination with the loop pedal whilst juggling his lines at the same time.

He spoke into the microphone as the rest of the team attempted to solve the technical difficulties asking the small crowd (of which I was a part), ‘How are we all feeling tonight?’ To which Amy Crighton replied with a blunt, ‘Like a baked potato.’ It suffices to say that we all dissolved in laughter.

It was interesting bearing witness to the process of such a close-knit rehearsal, especially to the relationship between director Jess Donn and her team. The process seemed to be exceptionally co-operative with Jess taking on board the views and suggestions of her team. She really does appear to be a kind of superwoman- organising the fine details and being concerned for the welfare of those around her.

“Alex Piechowski really is the epitome of an up and coming actor.”

I even got a sneak-peek into part of the performance, proving to me that Alex Piechowski really is the epitome of an up and coming actor. The snippet of performance I witnessed was raw, moving and completely encompassed the character he was embodying for the role.

But enough of my thoughts, let’s see what the team behind the production thought…

Q: Why did you choose to adapt this production in particular?

Jess (Director): “I was actually trying to write something looking at human connection and how we all need love, and in my research came across Adult Child/Dead Child, which said everything I wanted to say. When I first read it, I thought it would be an interesting script to direct for the Fringe season at NNT. After spending a month up at Edinburgh Fringe Festival and seeing some amazing solo shows that had multi-media aspects (Revelations by James Rowland, Status by Chris Thorpe and Rachel Chavkin, and Insert Slogan Here by YESYESNONO theatre)- I knew I wanted to experiment with form and structure as well as content and the way that AC/DC is written really allows for that to happen which really solidified my desire to direct this play.”

Alex (Actor): “When Jess said I should go for auditions, I wondered what made me want to do so. It wasn’t that Jess was a friend but that the play’s subject matter really interested me- the subtle emotional intensity, the range of themes and diversity of emotions really attracted me to the role.”

Charlie (Producer): “I wanted to produce for this show because when I heard about the ideas Jess had for the play, I really loved the mix of minimalist with more experimental ideas, but also the show itself just seemed incredibly interesting, and I would say it was that combination that drew me in to wanting to be part of the team.”

Q: What would you say were the main themes of the play?

J:“I think that the main theme of the play is the need for love. It’s something that most people take for granted – feeling wanted or needed and having people close to them – but it really does affect how we live our day to day lives. The play discusses mental illness and child abuse to frame this but really, at its core, it’s about loneliness and love.”

A: “Loneliness and lovelessness, what minds need when they’re growing up. A lot of the themes are present but in terms of priority? It’s hard to say.” 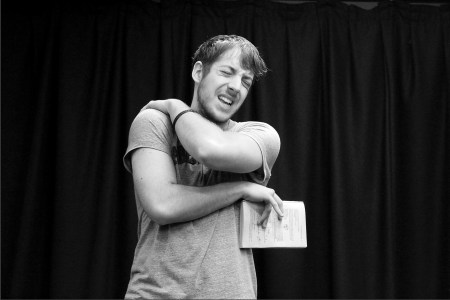 Q: The play centres around one main protagonist and explores tropes of isolation – how does the use of spoken word poetry and sound techniques add to this?

J: “The sections of the script that we are using as spoken word poetry are, within and of themselves, a story of how growing up without love affects you and how you have to process and deal with life differently. Performing them as spoken word poetry allows them to be separate from the story itself and adds to the isolation themes by really highlighting the underpinning elements of the play. Additionally, the live sound design is used to loop certain words and phrases so that we ruminate on them during the poetry, which I think adds to their significance.”

A: “As an “a c t o r” it helps to bring out the inner monologue, not so much the subtext that can be shown through micro-actions physically and vocally but it’s great in showing  the subconscious battle, the dronning repetition and building emotion, much like embroidery it should show the hidden back of the whole image, the composite parts of that inner battle.”

C: “The spoken word really helps emphasise the lack of love that the protagonist feels, and as Jess mentioned, it really highlights the sections of the play that have the themes of isolation running throughout. Similarly, it allows a separation for the audience, who are able to experience the change between the sections of spoken word poetry with the rest of the play and I think that’s a really interesting part of what makes the play interesting.”

Q: What’s the significance of having an unnamed protagonist? Does it enable the audience to project themselves into that position?

J: “Yes, in some ways. I don’t know if it’s about specifically the audience projecting themselves onto the character, but more about allowing us to understand that this could be anyone; age, gender, name – they’re all insignificant to this particular story.”

A: “Certainly as an actor it makes the creative process more personal, talking about ‘you’ instead of ‘them’; for the audience I think it doesn’t so much allow for projection as it does a sense of anonymity of the character, this is them watching a play, not about a character but about the actor.” 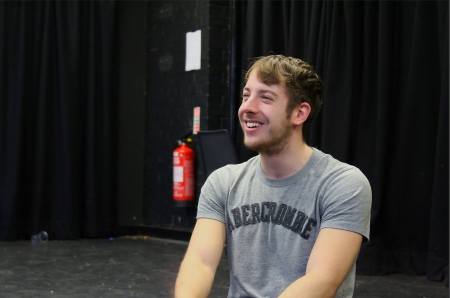 Q: Your favourite quote from the play?

J: “It’s quite difficult to pinpoint an exact line to be my favourite. There’s a lot of repetition in the play – phrases used at the beginning that come back at the end in new contexts – that I think are really beautifully written. There’s also one line in the final section that never fails to make me tear up, no matter how many times I see Alex run the scene. So probably that one, but you’ll have to come and see the play to find out what it is!”

A: “‘Nothing out of place, except me’ I really love it, it’s so simple and indicative of the wider theme, the feeling of displacement, isolation and I think everyone hears that and goes ‘yes, I know what that means’ and there’s a beauty in that- it is a great way for the audience to come in to the play knowing this play is relevant to them.”

C: “I think that, for me, there isn’t as such a favourite line rather than two favourite sections. The first is around the beginning and really begins to show the audience how neglected and alone the protagonist feels in an environment where they should be loved and cared for. The other section is at the end, and it implies that while things may not be entirely perfect for the protagonist, things are on the mend and they’re beginning to feel loved and comfortable in their own space and given the themes of the show, I think this is a crucial and heart-warming section.”

“The neglect that the character experiences leads him to want love…”

Q: What was it like rehearsing this play? The experiences from cast members?

J: “From my perspective, rehearsing this play has been incredible! Alex is a very instinctive actor and so we’ve been able to make the rehearsals really collaborative, talking through the moments of the play and trying them in different ways before landing on one that suits both my initial ideas and Alex’s acting. It’s also been interesting to know when to take a step back and just let Alex run with a section, which often then ends up being perfectly acted. So, whilst the rehearsal process has been intense, it’s also been very rewarding.”

A: “It has been a real privilege, working with Jess and on a script like this has made the whole process a lot easier. Jess has been amazing throughout and her help in creating this show really shows, she has brought out the best of my acting and it is gonna be great.”

C: “It’s been an absolute blast rehearsing for this show, and that’s because it’s such a friendly atmosphere. Jess is a fantastic director whose vision for the show is creative and interesting, and she’s been a great person to work with. Her attentiveness and eagerness to make sure the show is absolutely perfect is the driving force of this show and I’m really thankful for her to have asked me to be her producer. Similarly, Alex has been a phenomenal actor. He’s really outdone himself, he’s made the role his own and the performance value that he brings is incredible. Working with them both has been a  joy and a pleasure, and I know that the show will be absolutely brilliant.”

“Jess is a fantastic director whose vision for the show is creative and interesting!”

Q: What’s one thing you’d say audiences can take away from watching this production?

J: “I’d love everyone to come away having had a moment of connection – with Child as a character, with Alex as an actor, with the other audience members in the room. The end of the play, despite all the themes, is filled with joy and hope and I think if we can make the audience share in those feelings, then we’ve done our jobs well.”

A: “I’d say a greater emotional knowledge, I really think the play offers a lot in terms of potential takeaways but it is hard to say as an actor, if I had to go from personal experience, having been working with the script I would say a sensitivity to the issue of abuse.”

C: “It’s so difficult to narrow it down to just one thing, but I would love for audiences to come away with a sense of community, but also a sense of awareness. The show does deal with some very difficult themes, and while these may be uncomfortable to confront, the fact that the Alex takes the audience along with him through this story of abuse and then recovery will hopefully allow those watching to understand what it takes to help those in need, and to bring them to a place of love, acceptance and recovery.”

Dodging (Drunk) Dudes in the Dark