Behind the Scenes at NNT: ‘Grant Meets Death’ by Sam Morris

Esther goes behind the scenes once more to find out more about Sam Morris' new production... 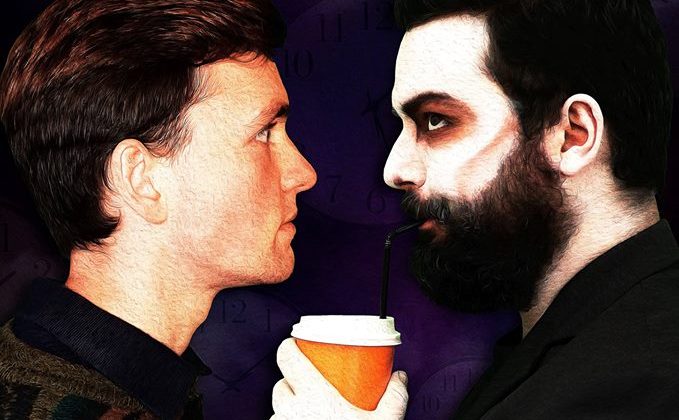 I had the opportunity to question the delightful cast of the NNT’s latest production, ‘Grant Meets Death’. Written by Sam Morris, directed by himself and Lillian Race and produced by Francis Simmons- this rollercoaster journey takes us through the life and death of the main character Grant in a wacky and comedic way. The production deals with eschatological issues whilst also reassuring us that who we are as people lives on – even after death gives the final curtain call.

Q: The concept of the play is quite unique, combining both serious themes of mortality and death but also comedy- what drew you to write the play (Sam) and what attracted you (Lillian and Francis) to want to direct and produce the play?

Sam:  The idea for Grants Meets Death first came to me about a year ago when listening to Johnny Cash’s ‘Hurt’. In my head I saw a person walking through a corridor, aging as they went until, in the end, they met Death. When, how or why that image turned into the play I eventually wrote – I’m not too sure about that!

I think it’s fair to say I wanted to tell a conventional story of a person’s life but to bring it to life in an exciting and slightly bonkers way. It would have probably been an easier play to write and stage if it had been a two-hander with Grant and Death just talking in a room. But for a play that is trying to reflect the randomness of life, it would lose something if it was done like that. I also like theatre that allows you to escape from the real world for a bit. I hope telling the story through time-travel, montages, dance, and game-shows gives that sense of escapism to the audience.

If I’m being perfectly honest, the want to write the play probably stems from wanting to reassure myself that dying will be okay. Weird thing to worry about, but I think we all as human beings need to be reminded that everything is going to be okay. Hopefully, this play does that.

I wanted to tell a conventional story of a person’s life but to bring it to life in an exciting and slightly bonkers way.

Lillian: The fact that the play combines so many different theatrical elements is what initially drew me to the play. Sam writes the story of a very ordinary man in a very unique way and manages to effectively expose the weirdness of life, and that is what I love about his writing.

The play is also aligned with many of my interests, especially physical theatre. For me, being able to help devise montages and use physical theatre as a method to formulate storytelling was an opportunity I could not turn down.

Francis: I had heard that Sam had written a play and that he was hoping to propose it with Lillian, but when they sat down with me to talk about producing they both just showed such wonderful enthusiasm for the play. Reading the script, it’s difficult not to get excited about it, because it’s something very very new that also has an eerie familiarity to it. It combines so much, and just left me going “I have no idea how to stage that, but I can’t wait to work it out!”. The characters are superb, and I immediately got the impression that under Sam and Lillian’s direction, they were in very safe hands.

Q: Do you have any funny stories from rehearsals?

Sam: Rehearsals have been an absolute blast, picking the best moment would be impossible. However, Lillian’s reactions to the physical theatre scenes when they were filmed and complete was priceless! Words will never do it justice – picture a woman from Huddersfield lifting her leg over her head and shouting ‘Woooo!’. It has become the cast and crews go to celebration move!

Lillian: Rehearsals would never fail to brighten my day, but each in a completely different way, primarily due to the casts’ wonderfully unique personalities. Each member of the cast can have me in stitches. I’d often leave rehearsals with my face hurting having laughed too much.

Francis: So many. Just some of the random things people would come out with, or some of the fantastic ad-libs the cast would throw in, and we would shout “Keep that in, it’s perfect!”. Also the time that Arthur bragged at the start of rehearsals that he’d learnt the two lines for his scene, and immediately forgot them as soon as we started. But even beyond the rehearsal room, we’ve been such a close-knit group with this really great comedic energy, it’s been fantastic.

It’s something very very new that also has an eerie familiarity to it.

Q: What’s the one thing the audience should take away from the play after watching it?

Sam: I think if I want people to take anything away from this play it’s reassurance and hope that death isn’t the end. We imprint on those close to us and when we are gone it’s our stories that live on. We are immortal and all individually special.

Lillian: I believe the play is about understanding that although bad things inevitably will happen throughout life, and those bad things may be caused by the mistakes that we make, it’s about learning to accept yourself for them, and understanding how those events in your life shape who you become.

Francis: I think ultimately it’s a show about hope. It takes on quite dark themes of death, loss, and unfulfillment and turns it into humour, love, and magic. It’s about seeing the good things that you don’t always appreciate, and that even when people don’t think it, life is good and worthwhile.

We’ve been such a close-knit group with this really great comedic energy!

Q: What was the process like making this play come to life?

Sam: From my perspective, it has been a wonderfully collaborative process. A lot of the physical sequences seen in the play were devised between myself, Lillian, Francis, and the cast. We’d often approach these by pooling together lots of ideas and building the sequence from that.

Lillian:  The process, for me, was challenging but incredible. The blocking, lighting, sound, video, costumes, props, and the transitions were all complex elements within the play that required a lot of time and effort from everyone involved. But the enthusiasm and commitment seen from the cast themselves and the rest of the production team never faltered, and that was what made this process special.

Francis: The process has been an incredibly collaborative one, and it’s such an interesting developmental piece. Everyone – the directors, the cast, the tech, even myself – have contributed at least something that you see on stage. It’s miles beyond what I think Sam and Lillian had envisioned, and I think that’s the sign of a really close production.

Q: Do you have a favourite line?

Lillian: When Miguel Barrulas (Death) says “When you think like her, say something like her, just for that brief moment, she’s alive again. She’s remembered. She’s immortal.” This line always gets me. Reminds me that we can live on after death if we are remembered.

Francis: It’s either “Red Velvet cake… it’s all form and no substance…. It’s the Tom Cruise of cakes” or the wonderful way in which Ethan says “My baton!”

We imprint on those close to us and when we are gone it’s our stories that live on. We are immortal.

Q: How do you manage to span the entirety of someone’s life in – presumably – 90 minutes? Was it difficult to stage?

Sam: At a script level, we span Grant’s life from 11 to 53, seeing key moments in his life that shaped the person he is. We decided to link these scenes through transitions. Grant (played by Ethan McCrystal) stands centre stage as the set changes around him – to give an illusion of the memories forming and morphing until we snap into the scene. The tech team (Andrew Houghton – Lighting Designer, Tara Prasad – Sound Designer and Zoe Smith – Video Designer) have created this beautiful aesthetic for the transitions. Moving lights, ticking clocks and fat bass drops that shake the seats have created this really visceral experience – it’s like you, the audience are also travelling through time.

Francis: Well it’s involved the purchase of an inordinate amount of clocks. And the script is written in such a way that allows the audience to see exactly how these characters develop, sowing the seeds quite early on and then sees them come to fruition. The tech elements are fantastic and really distinguish where exactly in Grant’s life we are, and the actors put in some wonderful subtlety to show how they have aged.

Q: Lastly, if you had to sum up the play in three words – what would they be?

Lillian: That is so difficult… maybe surreal, heartwarming and hilarious.