For the next three years the University will host the race which supports the Nottingham Breast Cancer Research Centre and here’s how you can get involved. 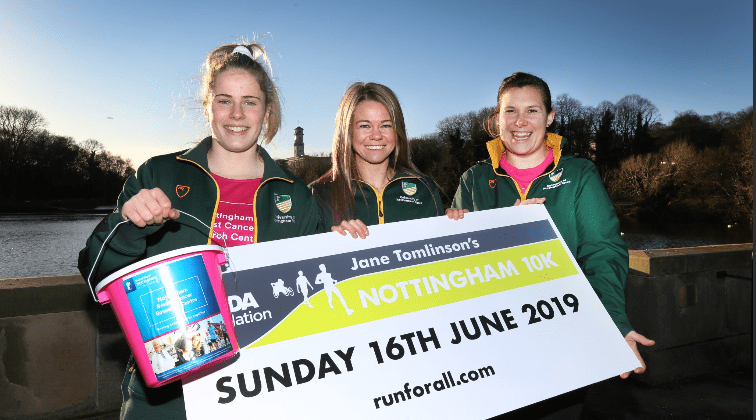 The University of Nottingham is calling on supporters to push themselves and sign up for this year’s Run for All event, which will take place in Nottingham on Sunday 16th June. The Run for All events are part of Jane Tomlinson’s legacy, having created the non-profit charity to support cancer victims across the UK. The route will be based on the scenic University Park Campus, including a lap of Highfields Park boating lake, and is an excellent opportunity to help the Nottingham Breast Cancer Research Centre.

Entry for University of Nottingham staff and students will be reduced to £20 until the end of February and a number of charity places are available for runners who can raise over £100 for NBCRC. Anyone can get involved, whether you perform at a high standard or just fancy the challenge.

The 10k has a special significance due to its connection to the late Jane Tomlinson, an amateur English athlete who raised £1.85 million for charity despite having terminal cancer. She created the non-profit charity alongside her charity the Jane Tomlinson Appeal, dedicating herself to helping others. Her legacy is inspirational, running multiple races such as the London marathon, London Triathlon and New York marathon during her battle. Some of her final challenges included a cycle ride from Rome to Leeds, and her last epic adventure was a 4,000 mile bike ride across the width of the USA.

Mike Tomlinson, Jane’s husband, has carried on the charity events as Executive of Run For All. He said: “Our partnership with the Nottingham 10k is very personal for our family because we feel a debt of gratitude to the city and its health institutions.”

“We’re always going to try and raise money for the Nottingham Breast Cancer Research Centre. The blood tests they’re developing are leading the way in hopefully making Jane’s dream a little bit more of a reality. This partnership and the money it will raise hopefully means we’re fulfilling Jane’s wishes.”

For every entry to the race, £5 will be donated to the Cancer Research Centre to support its vital research. All further profits will go towards funding the various projects that the Jane Tomlinson Appeal aids across the UK. The funds raised through the event will directly help cancer victims and continue Jane’s work.

Looking for some #MondayMotivation ?
The Asda Foundation supports a range of 10k events, 10 mile run, half marathons and marathon.
Check out all the details here: https://t.co/T3yPF3DjZ6 @runforall pic.twitter.com/aFc9bOQ4Ch

Director of the Nottingham Breast Cancer Research Centre, Professor Stewart Martin, said: “We’re really excited the University will be hosting the Nottingham 10k. Research happening here at the University is aimed at detecting breast cancer early, stopping it spreading and treating it right. Every pound raised by runners choosing to support our Centre will be used to help find the next breast cancer breakthrough.”

Dawn Broomfield, Community Fundraising Manager at the University of Nottingham said: “Since the Nottingham Breast Cancer Research Centre launched early last year we have been overwhelmed by the support received from university staff, students, patients and members of the community. Amongst other things, supporters have run, baked and cycled to raise valuable funds and we would be so grateful if people continue to support us by signing up for this year’s Nottingham 10k and choosing to raise funds for the centre.”

If you fancy the challenge, get involved and support the magnificent work of Run for All and the Nottingham Cancer Research Centre.

To sign up for the 10k and fundraise for the Nottingham Breast Cancer Research Centre visit runforall.com/events/10k/nottingham-10k.

Contact dawn.broomfield@nottingham.ac.uk from your university email address for a discount code or to register for a charity place.

One Heritage: Providing awareness of both the history and current realities of being of African heritage

Six Nations 2019: Why Wales are this Year’s Dark Horse