Antonio Brown is the latest victim of the ‘Madden Curse’

As more details emerge about Antonio Brown’s inevitable departure from the Pittsburgh Steelers - and its bizarre nature - we take a look at the legend of the ‘Madden Curse’.

In an unpredictable world, only three things are certain: death, taxes, and the ‘Madden Curse’.

What is the ‘Madden Curse’?

Before we get into what exactly happened to Antonio Brown, here is a brief history of the Madden Curse…

Ever since the year 2000, EA Sports decided to use NFL players on the front cover of their notorious video game, Madden. Named after the Hall of Fame head coach John Madden, it had featured the former Oakland Raider on the front cover since its inception in 1988.

Though this is a prestigious honour, many of the 19 NFL stars to have been pictured on the game’s front cover have subsequently endured a cruel fate.

The first player – Tennessee Titans running back Eddie George – had the worst season of his career after he was pictured on the cover of Madden 2001. His rushing yards total dropped from 1509 yards the previous season to 939 – falling short of the 1000 yard mark for the first time in his career. Thus, the curse was born.

Fast forward to 2003, and the Atlanta Falcons’ electrifying quarterback Michael Vick is the new front man. And yes, he had a Pro-Bowl season in 2004, but don’t be fooled. In November 2008, Michael Vick was sentenced to 3 years in prison for his involvement in dog fighting rings, of which he served only 8 months. This has made him one of the most detested athletes in NFL history.

‘But lo and behold, the curse struck again…’

On a less serious note, Vince Young, who was drafted with the third overall pick in the 2006 NFL draft by the Tennessee Titans, was the cover boy on Madden 07. As one of the greatest quarterbacks in college football history at the University of Texas, many had high expectations for the 2006 Offensive Rookie Of The Year, heading into his second season. But lo and behold, the curse struck again, and Young became a colossal disappointment, and he was out of the League by 2011, never fulfilling his potential.

More remarkable still, the next notable victim was Browns running back Peyton Hillis, who featured on the cover of Madden 12. Now, believe me, this is good…

After a breakout season in 2011 with 1177 rushing yards, another 477 receiving yards, and 13 total touchdowns, Hillis perpetuated the legend of the ‘Madden curse’. The following year, he had just 54 rushing yards. Admittedly this season was riddled by injuries and an ongoing contract dispute, but Hillis never even remotely recaptured his 2010 form.

Even the GOAT – Tom Brady – could not break the curse. After appearing on the cover of Madden 18, he lost in the Super Bowl to the Philadelphia Eagles. Okay, maybe he won MVP that year, but still…

Seeing the heavily publicised demise of Antonio Brown’s relationship with the Pittsburgh Steelers, and avalanche of inflammatory tweets from the four time All-Pro, one can’t help but think that he also has been cursed.

One of the NFLs brightest stars (and teeth/smile), everything seemed to be going swimmingly for Antonio Brown. The soon-to-be -former Steelers wideout has become recognised as the finest at his position, with 11,207 career receiving yards and 74 touchdowns.

Brown has also become known off the field for his extravagant lifestyle, spending his offseason in his hometown Miami, and making bold entrances to Steelers training camp in helicopters and Rolls Royces.

And to top it all off, Brown was chosen to be on the front cover of EA Sports’ Madden 19. Now what could possibly go wrong?

The Steelers superstar – who was the first to appear on the Madden cover without a helmet – played another phenomenal season.

As recently as last December, the Pittsburgh Steelers and their legendary wide receiver were making their final push towards the NFL playoffs. Brown, 30, was having another stellar campaign – en route to his sixth consecutive season of 1200 or more receiving yards. Brown has had the most prolific spell by any wide receiver in NFL history, recently breaking the record for most catches over a six year period, with 686.

Despite another vintage season for AB, all was not how it would seem. Brown did not feature in Pittsburgh’s final game of the season, a must win against divisional rivals Cincinnati Bengals – which came as a slight surprise. But when news unfolded that he had been kept out for ‘non-football related reasons’, this triggered speculation about his future with the team.

Since, it has become increasingly apparent that the ‘Madden Curse’ has got to Antonio Brown. And this is perhaps the most bizarre incident yet. Brown has taken to twitter to roast the Pittsburgh Steelers, making it clear to them, and the world, that he wants to be traded. On February 16th, he criticised former teammate – quarterback Ben Roethlisberger – for having an ‘owner mentality’, stating that his decision to request a trade was ‘a matter of respect.’

No conflict just a matter of respect! Mutual respect! He has a owner mentality like he can call out anybody including coaches. Players know but they can’t say anything about it otherwise they meal ticket gone. It’s a dirty game within a game. #truth https://t.co/MsSyBVd3Ny

To many, it would seem, that Brown’s ego has just exploded, as may be seen on his Twitter account (@AB84). A plethora of tweets such as ‘don’t be tolerated, be celebrated’ have reportedly been off-putting to team owners across the league, who question whether Brown would be a problem in the locker room.

After the Steelers were eliminated from playoff contention, Brown tweeted on 2nd January that ‘I am divinely blessed with free will. I utilise that gift, choosing to take charge of my life; to express the creativity, vitality, and wholeness that truly define me’. This sent Twitter into a Dionysian state, as this declaration made it clear that Brown’s absence from the Steelers’ final game was not to be taken lightly.

His departure from Pittsburgh is now only a matter of time. Its nature has been unlike anything seen before, as this acrimonious divorce has got out of hand. Sure, teams will want to trade for the League’s best wide receiver, but at what cost?

If you are not yet persuaded that the ‘Madden curse’ is real, here’s the final nail in the coffin: Antonio Brown has recently dyed his moustache blonde. Blonde. I say no more. 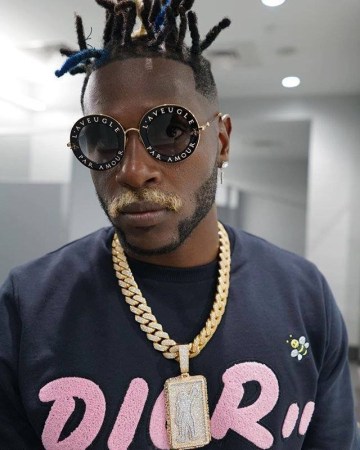 What Should (And Will) Win at the Oscars? – Part 1

#10yearchallenge – Running out of Time to Save Our Planet