For fans of Chvrches, their headline set at Rock City last night had been a long time coming. Indeed, in addition to singer Lauren Mayberry herself admitting that it had “been a long time since we’ve been in Nottingham”, Chvrches’ last album, Love is Dead, came out last year, with the band being on tour ever since. Fortunately, the band did not disappoint, demonstrating the showmanship acquired having spent the year on the road. 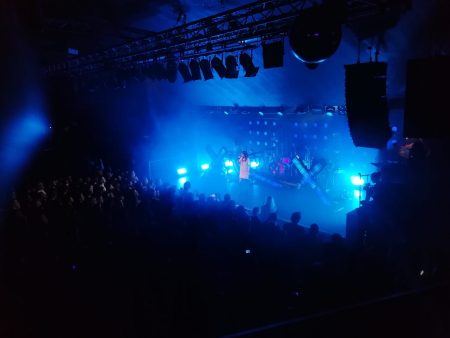 Opened by Let’s Eat Grandma, the teen duo made the most of the small stage size that they were prescribed. With their bubblegum meets goth pop vibe, the band’s psychedelic disco tones worked to their favour. Accompanying their whispy vocals with acts more intrinsic to a playground setting (I’m talking about the playing of the recorder, Macarena or playing of patty cake), the duo were determined to prove themselves as a band capable of putting on a show.

‘Get Out’ proved to be the perfect song choice to set the night in motion, with its extensive radio play making the performance accessible for all those there. From this point on, the setlist was full of songs showcasing their back catalogue of their three albums, with the likes of ‘Bury It’ and ‘Gun’ seamlessly accompanying newer releases such as ‘Graffiti’.

Before the show, I was worried about how Chvrches’ 80s electronic waves would translate into live performance: how much did the band’s sound rely on the synthesisers and heavy modulation that only the recording studio could accommodate? Nonetheless, my concerns were quelled as the band’s performance mirrored that of their studio presence, with songs such as ‘Miracle’ being elevated in the gig atmosphere, becoming more anthemic and intense than the record itself.

“Every song was accompanied by a choir produced by the audience”

In the process of introducing the songs from their latest album, Lauren told the crowd to “bear with us”. However, this downplaying of their lesser known songs was totally unnecessary as the crowd was evidently full of fans familiar with their back catalogue, back to front, inside-out – every song was accompanied by a choir produced by the audience. The crowd were electric from the get-go, with the buzz lasting right until the encore, with Lauren’s trademark helicopter spins and the stage’s mesmerising lighting arrangements emulating the liveliness of the masses.

Breaking up the familiarity of Lauren’s vocals was when Martin took to the mic to sing two songs, ‘God’s Plan’ and ‘Under the Tide’. Although Martin’s frontmanship was undeniably unfamiliar for the crowd, his passion and energy for the band had the crowd on his side. As he ran around the stage, pulsating his body to the synthpop beats, his demeanour had a distinctly Chris Martin-esque vibe. With the stunts being left to Martin, Lauren gave us an insight into the reality of band life, evidencing Chvrches departure from stereotypical conceptions of rock ‘n’ roll bands. Leaving any idealisations of musicians behind, Lauren made clear that the band prefer to immerse themselves in the glitz and glamour of DIY haircuts, hot water bottles and tea (or LST as drummer Jonny wittily remarked).

“The band have enough experience under their belt to put on a crowd-pleasing experience.”

Closing main set with the hits ‘Recover’, ‘Leave a Trace’ and ‘Clearest Blue’, Chvrches made sure to end on a high-note. With no warning that these were the final songs, the band’s exit from the stage was quite abrupt, but for anyone who has ever been to a gig before, they would know that this disappearance was only going to be momentary anyway.

Despite the crowd having been invested in the band from the moment they walked onto the stage, it was in the encore that the crowd really came into its own. Beginning the addition with perhaps their biggest single to date, ‘The Mother we Share’ before proceeding onto an impromptu version of Whitney Houston’s ‘I Will Always Love You’ (after a bit of peer pressure, or crowd persuasions as I like to call it), Chvrches confirm how good things come to those who wait.

As the band left the stage for the final time, ‘Never Say Die’ gave the crowd what they really wanted with its refrain-like chant “Didn’t you say that” creating a lyrical dialogue between the band and the audience. This reciprocal relationship was fitting, showing us all how the band have enough experience under their belt to put on a crowd-pleasing experience. 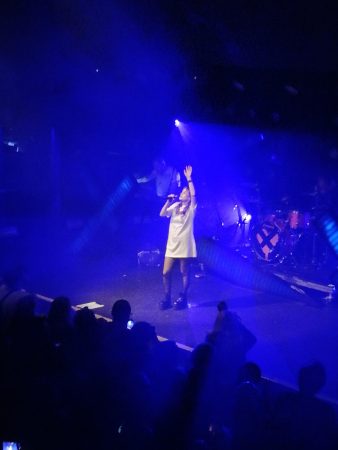 Overall, the night was a success, with the setlist comprising of the perfect balance between old and new hits. The band’s in between song Scottish banter offered an insight into the band’s dynamic, foregrounding their gratitude, friendship and enthusiasm for their craft.

Best Dressed at the 2019 BAFTAs