Women in Music: Interview with The Tuts 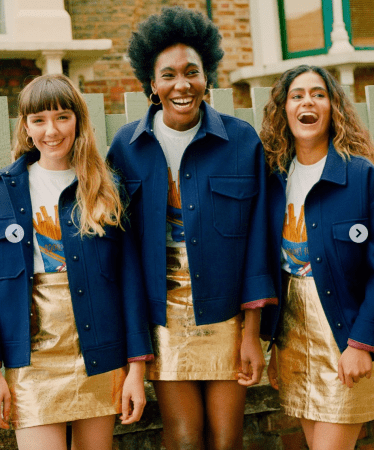 Women in Music, being held on the evening of March 13th at Metronome, is an exciting event that will bring together many female music professionals to discuss problems of diversity within the music industry.

I had the opportunity to have a chat with The Tuts, an all-female band that will be on one of the panels at the event. Their music, rich in attitude and defiance, incorporates various genres and influences including pop, indie, and punk.

The Tuts consists of Nadia Javed on lead vocals, Harriet Doveton on vocals and guitar, and Beverley Ishmael on drums.

The band are taking the musical world by storm with their original and quirky sound, and as a “three-tone” band, they represent talents from Caribbean, English, and Indian/Pakistani backgrounds.

What first got you into music and can you remember your first musical memory?

Nadia: The Spice Girls got me first into music, and my first musical memory was probably buying Because We Want To on CD from Woolworths.

Harriet: I guess mine’s similar in that I was really into mainstream pop; with the Spice Girls I used to record their videos off the TV onto VHS. I also remember one of the first albums I got for my birthday was B*witched.

Beverley: My first ever single that I bought was ‘911’. I think I remember my parents buying a CD player, and the first CD that we ever had in the household was Fugees.

What draws you towards the punk elements to your music?

N: When we were growing up, we didn’t have Spotify and I suppose we gravitated towards guitar music and guitars because we didn’t really fit in anywhere. So that was where we felt we could resonate most with. You just walk into HMV and pick up The Smiths, The Clash… but I know Morrissey’s racist now so it’s not that great. Man bands, actually! We didn’t really have much of the internet back then; now you can Google “female-fronted band” or “riot grrrl”.

H: People found out about riot grrrl when it was happening, when it was alive, and it created its own culture; but that wasn’t really our generation. So we [listened] to whatever was in Woolworths or HMV.

“When we were growing up, we didn’t have Spotify and I suppose we gravitated towards guitar music and guitars because we didn’t really fit in anywhere.”

N: Harriet was quite lucky growing up because her parents were into The Beatles, so she was surrounded by music quite early on. But for me and Bev, we kind of stumbled across it by accident. I remember how we stumbled across The Libertines: this boy punched another boy and was like “oh bruv, this is a liberty, this is a liberty, this is a liberty!” And then we found somehow from the radio that there was this band called The Libertines, and we looked them up (there was Limewire that you could download stuff from back then). I remember the first song we listened to in Bev’s conservatory, and it was ‘What a Waster’, and we were like “what the fuck!” Back then that was revolutionary!

What’s been your favourite gig experience?

B: My favourite gigging experience was gigging with The Selector. Supporting an artist is so much fun! Obviously we love headlining, because we’re giving something back to our fans and you’re giving them a longer set. But when you’re supporting someone, it’s like you’re on a school trip! The pressure isn’t so much on you, and then you get to get a bit tipsy and then watch the headline band (and get to play!).

N: It’s good supporting people, because I guess it’s low-pressure, but also at the same time you do want to grow and step outside of your comfort zone. It is an amazing feeling to accomplish headline shows. After we dropped our album in 2016, we went on a headline tour, and we even managed to sell out some of the dates. But even the dates that were still packed but not necessarily sold out, there was still a great energy in the room. The fact that you aren’t hiding behind a headline act, you can say “I brought all these people here, we did this.” It’s even more of an achievement in a way.

As an all-female band, have you found some audiences to be quite troublesome? For example, Joan Jett, the lead singer of The Runaways, said that when they performed in the ‘70s many of their audience members didn’t take them seriously because they were an all-female band.

B: Yes. A lot of people ask me “what’s it like drumming in a dress?” It’s the same way as you drum with two balls between your legs.

H: It’s hard to talk about this because it’s anecdotal. Really it’s the whole consciousness of micro-aggressions from people who won’t accept, firstly, women that are playing instruments, and secondly, women-of-colour that are playing indie-punk genre. It’s like putting in that extra mile to prove yourself, like Nadia would describe it as a double-battle.

“If I was a white man in a band…I doubt very much that I would have been treated in the same way.”

N: We had one incident a few years back at Undercover Festival. We had a couple of drinks, and we were having a good time, we were backstage, we just played, and we were watching The Selector. And because we were good friends with them, we were just watching by the side of the stage. I wasn’t going to jump onto the stage, but for some reason the security had it in their head that I was going to run on the stage and cause havoc, and out of nowhere. Without any warning, this guy grabbed me from behind and try to usher me away. And because I was like “what the fuck” I retaliated, and Harriet and Bev got involved and said “what the fuck, get off her.” And we ended up getting kicked out of the festival that we played at. If I was a white man in a band, and I was having a few drinks, standing at the side of the stage watching a band, I doubt very much that I would have been treated in the same way. […] We’ve actually had these physical, violent experiences, and then mental backlash.

B: We usually have a tour manager [with us at gigs], and we didn’t for that show so we did it ourselves. But we literally were like “we can’t go on tour, it’s actually unsafe for us to go on tour”. And not every girl band starting off can afford a [tour manager], because obviously you have to pay them, but not everyone can afford that. So it’s actually quite dangerous for three girls to be going out touring. I don’t want to put anyone off, but that’s our experience.

H: It’s scary that we are our own witnesses, so when you try and justify and explain yourself you feel like you’ve got no one to back you up.

Do you think there are any other populations that you think are under-represented in indie bands?

B: Yeah, minorities are always under-represented in most things anyway. There’s not many brown people in punk music, especially in mainstream. You don’t see anyone on stage, like a person-of-colour, who’s got a guitar. I can’t think of another person-of-colour who plays drums or anything like that to be honest.

N: Only Gary from The Libertines!

H: I suppose on a DIY scale there are a lot of people-of-colour in bands, but in mainstream it hasn’t caught up yet.

N: But fuck mainstream, it’s all about getting your own fanbase.

What are you looking forward to most about Women in Music and do you think there needs to be more of these events around the UK?

N: Yeah, it’s nice just to get out of the house!

H: Obviously we’re in London, so it’s not like there are loads of these events, but you hear about them. It’s nice that we can go to one in Nottingham where, I can’t really speak for Nottingham, but maybe there aren’t as many panels happening.

What would you say to minorities wanting to start a band of any kind?

H: Try not to lose sight of why you wanted to do it in the first place, and don’t get bogged down on trying to feel validated by others. Remind yourself of why you’re doing it and surround yourself with people who you trust.

“Remind yourself of why you’re doing it and surround yourself with people who you trust.”

N: You’ve just got to do it! You’ve got to get a small community of you and your mates and positive people. You’ve got to believe in yourself and surround yourself with people who believe in you, and slowly the magic will start to happen. And small steps at a time. It takes time. We’ve been doing this for seven solid years now, before that we were still a band anyway. But [our success] didn’t come overnight; it took seven years of solid hard work.

H: Be aware of what’s going on around you, and who might be interested in your band and who else you might want to play with.

Tickets are available for Women in Music on Wednesday 13th March at Metronome here.

Featured Image courtesy of Carly Jones via Women in Music.

Article image courtesy of Liz Bee via Women in Music.