With LGBTQ+ History Month just having passed in the UK, here at Impact we asked our wonderful writers to celebrate the month by writing about some of their favourite LGBTQ+ icons. This history month is a month-long annual observance of lesbian, gay, bisexual and transgender+ history, as well as the history of the gay rights and related civil rights movements. Here are some of the people throughout history who have been aligned with the LGBTQ+ movement and have had a significant impact on many people around the globe.

Felice Schragenheim was a young Jewish woman living in Berlin during the Nazi regime. She was a member of the German underground resistance and worked undercover as an editorial assistant for a pro-Nazi newspaper.

In 1942 Felice met 29-year-old Lilly Wust, mother of four and wife of a Nazi soldier. The attraction between the two women was immediate, and they soon became besotted with one another. Felice would visit Lilly almost every day, bringing flowers and poems.

At first, Felice kept her Jewish identity a secret from Lilly. She would disappear for days at a time to support the resistance, enabling fellow Jews to escape. One night, Lilly begged Felice to tell her where she had been. “She told me she was a Jew and immediately I took her in my arms, and I loved her even more,” Lilly said.

On August 21 1943, after a romantic picnic together by Havel Lake, the couple returned home to find eight Gestapo officers waiting. They had been hunting Felice for months. She spent the rest of her days in a series of concentration camps, and is believed to have died on a death march aged only 22.

Lilly outlived her lover by over sixty years. In 2001 she called Felice “my other half, literally my reflection, my mirror image.” Felice is one of my personal heroes because she inspires me to live and love courageously.

Judy Garland has always had a long-standing relationship with the LGBTQ community, even being called “The Elvis of Homosexuals” for a point in her life. This was largely based on her ability as a camp performer but also for her own personal tragic struggles; as a performer who grew up on screen, gay men could easily identify with her pain and isolation shown in her real life.

Judy Garland played Dorothy in the ‘Wizard of Oz’, which was hugely influential for the LGBTQ community as it deals with themes of finding a new family and friendship. The song ‘Over the Rainbow’ has often been acclaimed to represent the LGBTQ community as it speaks about the experience of being in the ‘closet’, as well as the close relation to the rainbow flag which is a cornerstone for the LGBTQ community. At the time it was illegal to disclose if you were gay, a phrase to discretely ask if somebody about their sexuality was, “Are you a friend of Dorothy?” It originates from a moment in ‘The Wizard of Oz’ where Dorothy is told that she has queer friends, where she replies: “The queerness doesn’t matter, so long as they’re friends”.

“She is remembered through the numerous performers, stage plays and drag shows”

It has even been suggested that her untimely death in 1969 had a part in starting off the Stonewall riots, which is considered by many to have started the modern LGBTQ movement. The riots occurred just 24 hours after Garland’s funeral service, which was attended by 20,000 mourners. Though it is still hotly debated, it could be suggested that as well as the injustice occurring at Stonewall, the loss of Judy Garland pushed the feelings of grief and loss even further. Regardless, she is remembered through the numerous performers, stage plays and drag shows that celebrate Judy Garland’s work and her connection to the LGBTQ community.

Marsha P Johnson was a transgender LGBTQ+ activist, who was major part of the NYC queer scene from the late 60s to early 90s. Johnson is my favourite LGBTQ+ icon because of the strength and spirit she possessed; her legacy inspires me every day. She fought the fight every single day for the LGBTQ+ community, from Stonewall in 1969, to consistently attending marches and rallies, to her magnificent drag performances. Marsha’s strength is utterly remarkable; the hurdles she faced were endless – battling severe mental illness and being effectively homeless for the majority of her life.

“Her advocacy for sufferers during the AIDS crisis”

Johnson has been remembered in recent years by a documentary on Netflix, called “The Death and Life of Marsha P. Johnson.” Her death is of particular interest due to the suspicious circumstances. Along with the documentary, her legacy has gained lots of interest recently; praise for her relentless fight for social and economic justice, her help with homeless youth (thrown out due to their LGBTQ+ identities) and for her advocacy for sufferers during the AIDS crisis, has spiked.

Marsha was and always will be an LGBTQ+ icon, and personal hero to me, and I will always try and uphold her legacy in all I do.

Rose and Rosie are a popular LGBT YouTube couple with over 1.4 million subscribers across their three channels. Their main channel is famed for its side-splittingly funny unscripted ‘couch comedy’, in which viewers can watch the girls discuss current topics, react to (usually LGBT related) popular culture and take part in challenges. They also have a vlogging channel, which allows viewers a peek into their everyday lives, and a gaming channel, which further showcases their personalities and quick wit while they compete in challenging games and do comedic walkthroughs.

“Made a documentary about LGBT stories called Overshare”

Rose and Rosie have been making videos together for 7 years, and in this time have not only built their brand as hilarious YouTube sensations, but have also done an international comedic tour called Rose and Rosie Exposed, made a documentary about LGBT stories called Overshare, and have written a fantastically comical and brutally honest book by the same name sharing their personal experiences and difficulties. Their tour was not only hugely funny and entertaining, but was largely based around fan interaction, a key part of Rose and Rosie’s brand. They care deeply about their fans, taking the time to talk with them online, and even kissed a few lucky ones on stage! 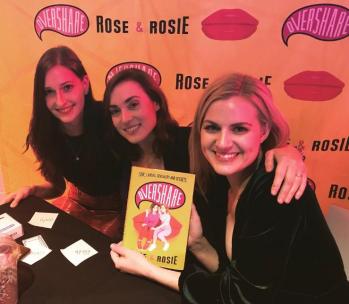 Pandora with Rose and Rosie

As you can perhaps tell by titles like Exposed and Overshare, Rose and Rosie are very open about their lives, and reveal many personal secrets to their fans, which at times can be very funny, at times extremely moving, and always makes their audience feel less alone. Watching their videos played a crucial role in my acceptance, and eventual love, of my sexuality. Seeing two women happily living together gradually gave me hope that, as a bisexual, I could one day be equally as happy with a woman. Watching them interact and hearing them talk about their relationship gradually allowed me to be more comfortable with who I was, and has done the same for countless other fans. And they were so lovely in person when I met them at their book signing and got to thank the girls for what they had done for me. Rose and Rosie are truly LGBT icons, educating and entertaining a generation of baby gays (and anyone else who wants to watch)!

Slaughter-free meat: a sci-fi nightmare or an innovative solution?

Rosa’s Recommendation of the Week: Dolce