Nestled behind Nottingham Contemporary is Head of Steam, which is a relatively new bar on Nottingham’s restaurant and bar scene. To mark the bar’s first birthday, Head of Steam has opened a new gaming space on its first floor.

As well as the new gaming space, Head of Steam has also launched a new food and drinks menu to celebrate their first birthday. There were a good number of cocktails on offer, and I opted for the Cucumber Collins, which had gin, elderflower liqueur, cucumber and lemonade. The use of the elderflower liqueur added a delicate twist on the traditional Tom Collins cocktail. The Pink Lemonade cocktail was also a perfect choice for gin lovers. 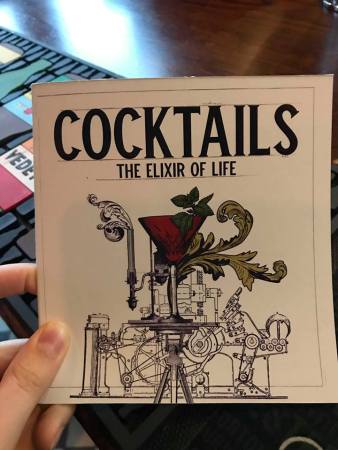 “The cocktails were really tasty, with them all offering a classic twist on some much-loved favourites”

I also tried a shot of Head of Steam’s Bloody Maria cocktail. It was a creative twist on the classic Bloody Mary cocktail, with the Bloody Maria using Tequila instead of the conventional Vodka. The use of Tequila meant that the cocktail was much smoother on the palate, but it still succeeded in clearing the sinuses! Overall, the cocktails were really tasty, with them all offering a classic twist on some much-loved favourites.

“The ginger and garlic chicken wing was really scrummy, with the meat effortlessly falling off the bone”

The food was brought around as canapés, so unfortunately I didn’t actually get to try the vast array of items on the new menu. However, what I did try was really delicious. The ginger and garlic chicken wing was really scrummy, with the meat effortlessly falling off the bone, whilst providing a punchy kick. I also tried a vegan chicken wing, with the skin having the perfect combination of crispiness and flavour.

As an avid nacho fan, I don’t think the nachos weren’t anything special. They were topped with a cheese sauce and jalapeños. The nachos just didn’t blow me away or hit the spot; the tortilla chips weren’t seasoned enough, and I don’t think there were enough toppings.

“The burger was juicy and extremely flavoursome”

The final thing I tried was a mini version of the classic burger. The burger was juicy and extremely flavoursome, with the cheese, gherkins and relish adding the perfect combination of saltiness to satisfy the taste buds. As well as what I tried, there is plenty more on the menu, including pizzas, hot dogs, and lots of types of burger, including a vegan hoisin duck burger. The descriptions all look really yummy, but since I didn’t try those items, I can’t vouch for their taste.

Head of Steam’s menu is really broad, but I couldn’t identify a unique selling point or anything on the menu that makes it stand out as a place to add to a Nottingham bucket list.

The interior of the new gaming space was really cool, with the graffitied walls and wall art giving the space a cool, grungy vibe. The walls were scattered with neon signs, train signs and wacky lights, which gave me the impression that the space was in a basement. Funnily enough, the space was actually on the first floor. I think the vibe of the space complimented the cocktails nicely. 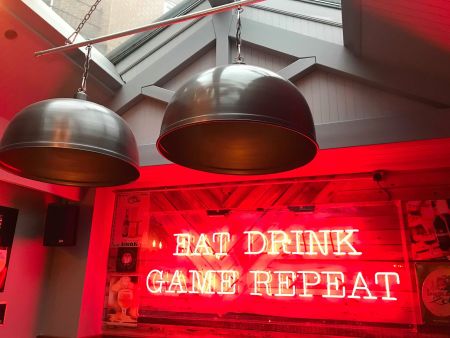 The gaming choices weren’t as vast as I initially anticipated, with the lounge offering electronic darts, shuffleboard, pool, table football, table tennis and an old PlayStation. As someone who’s not massively into gaming, I feel as though the space might be disappointing to the more passionate gamers out there. However, I did really enjoy what was on offer.

Head of Steam’s gaming space resembles that of Roxy Ballroom, however I don’t think that the space had anything that gave it an edge over other places within Nottingham that have a similar vibe and things on offer.

Overall, I would definitely recommend checking out Head of Steam’s new gaming space as an alternative night out in Nottingham.