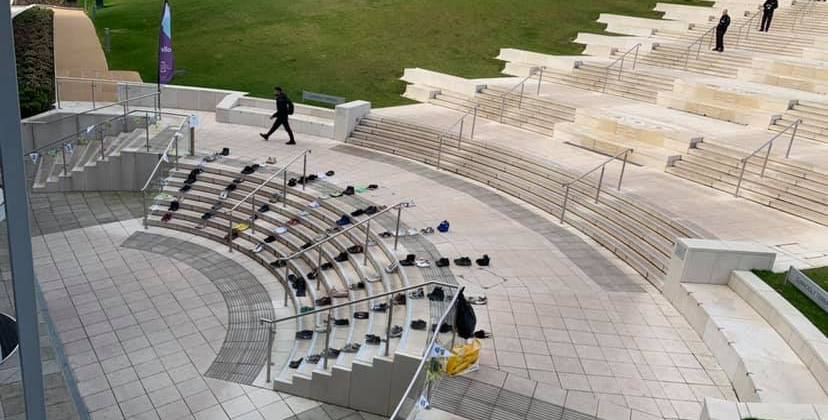 As you all made your way around campus, I’m sure you were bought to a halt when you saw the display of 95 pairs of shoes at the bottom of the steps of Djanogly Terrace, which will be up all week. Myself, along with many other students, paused for a moment at the commemorative display, looking at the 95 pairs which represent the number of students who lost their lives to suicide just last year. At Impact, we decided to get in contact with Zoe to explain the display and what they have planned for Suicide Awareness Week.

What is the significance of Suicide Awareness Week?

I’m holding a suicide awareness week to firstly raise awareness of this as an issue and secondly ask the university to take action on reducing student suicides.

What was the thought process behind the display at Djanogly?

The display at Djanogly is really visually powerful as you can clearly see how many people 95 really is. I saw a similar display done in a town in Ireland so chose to do it here.

“We used donated shoes so that the shoes really represented students and specifically our students here. If you look at the shoes you can really tell all the types of people they belonged too.”

Why did you specifically choose to use donated shoes and what was the significance?

Each pair of shoes represents one of the 95 students who died by suicide in England and Wales in 2017/18. We used donated shoes so that the shoes really represent students and specifically our students here. If you look at the shoes you can really tell all the types of people they belonged too.

What else have you got planned for Suicide Awareness Week?

We have a 95 seconds of silence on Friday at 12 where we will also be having speeches from myself and Myles, as well as people who have been affected by this issue. 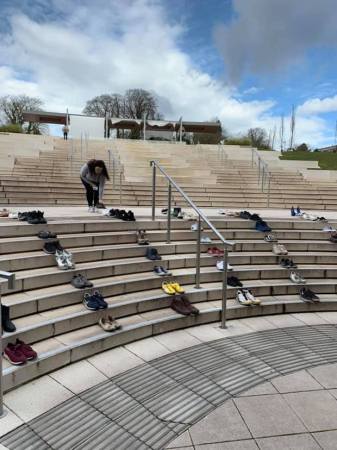 Is Suicide Awareness Week something that you’d like the Welfare Network to commemorate annually?

I would like this to be a yearly week and hope that the university and SU continue it in the future.

“I hope the university will listen to our petition and introduce the change we are asking for. I hope that any students who are struggling at the moment know that it is okay not to be okay…one life lost to suicide is too many.”

What impact do you hope this will have on the students and on the university?

I hope the university will listen to our petition and introduce the changes we are asking for. From students, I hope that any students who are struggling at the moment know that it is okay not to be okay and to please ask for help. One life lost to suicide is too many.

What has been the initial response that you have received from students so far?

Students so far have been hugely engaged with the campaign – we’ve had over 1300 signatures in 1 day and my Facebook post has over 600 likes. So many students have messaged me asking how they can get involved with the campaign. Huge amounts of students have been stopping by the shoes and reading the signs which is encouraging. I just hope everyone signs the petition as that is how we can persuade the uni to do more!

As mentioned by Zoe, there will be a 95 second silence held on the Djanogly Terrace at midday to remember the students who lost their lives to suicide, for more information check here.

If you have been affected by any of the issues we have been talking about in Suicide Awareness Week, then please make use of these support services here.

If you would like to see more funding allocated to these services, then please sign the petition.

Why You Should Go Pro Bono

What are the World’s Most Stylish Cities?