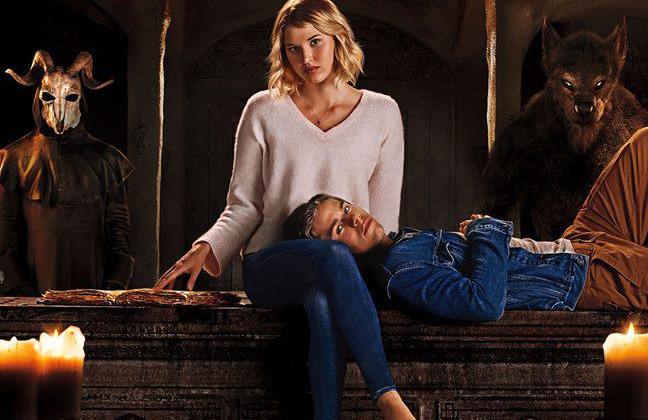 The show presents an interesting, if somewhat convoluted, premise; Jack Morton is the forgotten son of famous philanthropist Edward Coventry, seeking revenge on his father after his mother’s suicide, for which Coventry is blamed. In order to do so, Morton attempts to join the titular ‘Hermetic Order of the Blue Rose.’

From there, the show seeks to build up a tangled web of alliances, enemies, and organisations, centralised by the character drama and conflicts Jack Morton is presented with. Jack quickly finds himself torn between helping his friends and doing what is right, standing up for what he believes in or furthering his ultimate goal. His struggles are projected onto the framework of the American university experience – and, perhaps more interestingly, onto some notions of class struggle and clash.

Heaton presents some interesting concepts over the course of the roughly eight-hour runtime – as an urban fantasy, Supernatural-esque mystery show, it stands out with relatively novel introductions of magic and monsters. The star of the show is Martini, whose brilliantly-chilling moments of cold ruthlessness provided an enjoyable over-arching villain.

“The upsides are outweighed by weighty negatives”

Unfortunately, however, the upsides are outweighed by weighty negatives – whilst other actors have their moments, none reach quite the convincing heights of Martini and the show is all the worse for it. Additionally, the show seems to alternate between wanting to function as a ‘bad guy of the week’ show, and a deeper mystery series with a season-long plotline. This hesitation causes a failure on both sides, leaving the watcher uninterested in the weekly foe and uninvested in the overarching plot.

Characters, too, were sometimes found lacking – shifts in personality sometimes came far too quickly, interesting facets of a believable person were suddenly dialled up to eleven purely for dramatic purposes. Instead of presenting something interesting, however, I found myself ejected from the world, conscious that I was watching a flawed television show instead of being enraptured by the world within.

“Despite these notable failures, however, I found myself compelled to keep watching”

Despite these notable failures, however, I found myself compelled to keep watching – the side characters present enjoyable banter and conflict, and the show presents some twists and turns that I found myself honestly surprised by. Some problems were solved a little too easily for my liking, but the methods by which they were completed always managed to convince me that something even more interesting was waiting just around the corner, and I found myself drawn in by the promise of something better.

It is only with the finale that I found this promise ultimately delivered – whilst most of the episode follows a conventional series closer, the last twist felt utterly visceral and shocking, leaving me surprisingly anticipatory for another season.

Ultimately, whilst it has some rough edges and a disappointing middle, I found that the good points shone through more strongly than the negatives.

Featured Image courtesy of Netflix and Nomadic Pictures via IMDb.

What are the World’s Most Stylish Cities?