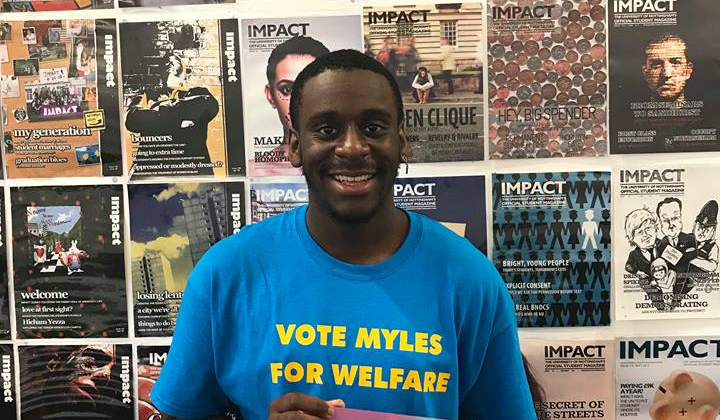 Myles Smith has been elected as your new Students’ Union Equal Opportunities and Welfare officer for 2019/2020.

Myles Smith has been declared the Equal Opportunities and Welfare officer for the 2019/20 academic year after winning 4 rounds of voting, with 2271 votes.

Myles says he feels “good, amazing, brilliant fantastic and astonished” about being elected.

The highlight of his campaign has been the response he has got from his hustings speech. He states that “The number of people who came and shared their stories with me made me feel humbled and I can’t wait to get started”.

He tells Impact his campaign was challenging because it was full of emotions and “it was very draining just having the drive to keep going every day”.

The manifesto point he’s most looking forward to implementing is introducing a long-term plan to reduce instances of self-harm.

He’s going to celebrate by calling his Mum.