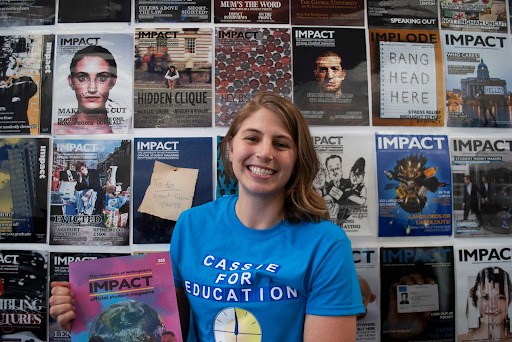 Cassie was declared the winner after winning one round of voting with 1825 votes.

Cassie told Impact she was ‘So excited – beyond excited,’ to have won, and reported feeling, ‘a little nervous coming in but to win in the first round of counting – that’s what I set out to do.’ Of the other candidates she added they were all, ‘so qualified for Education,’ and that she was, ‘just surprised honestly.’

Her highlight of the campaign was feeling, ’empowered and fulfilled to hear people speak about what they’re passionate about,’ and being able to learn about things through them.

Cassie went on to state that there were a number of things she found challenging. One of these included having, ‘to take time off from my current position since last Thursday. She found this stressful, as there were, ‘projects going on that I knew I should have been working on .’

To celebrate, Cassie said that she would be going to, ‘Ocean with all the candidates and Officers,’ and, ‘can’t wait to go out and celebrate with them.’

Of her manifesto points, lecture capture  is an issue she is particularly motivated to work on. She stated, ‘I think it’s such a necessity for all students with a disability or who can’t get to class due to mental health issues.’ She is also eager to push self-certification policies for ECs.