After having the privilege of interviewing Whenyoung before the gig and after listening to their music on the bus journey I was excited to see them in action on the stage, so I purchased a cold dark fruit and watched as people slowly started to fill the notorious Rock City standing area.

As someone with a keen interest in female power dressing I immediately had an appreciation for singer Aoife’s powder blue trouser suit which for me captured the band’s essence-sophisticated but edgy. Whenyoung played all their original music as well as their new release, the catchy but beautiful song ‘Never Let Go’ which is personally one of my favourite tracks that I was stuck in my head for the rest of the evening.

“I definitely felt like I wanted to hear more from them”

On the day of the gig they had just announced that their new album Reasons to Dream will be out in May which was very exciting to me as after listening to their original singles I definitely felt like I wanted to hear more from them. They also played their song ‘Future’ which had just been released that Friday, and Rock City truly seemed like the best place to debut the slow burning instrumental track. There is a definite sense of storytelling with this new track and it seems to allude to their journey as a group and the promising future they have ahead. 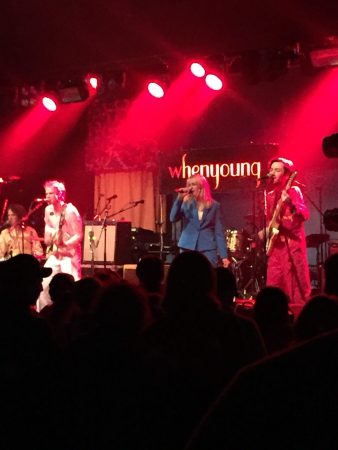 I can truly say that Whenyoung are one of the best supporting act I’ve seen so far when it comes to the indie music scene. As someone who has been to a lot of gigs, I know the pain of having to sit (or mostly stand) around listening to a supporting act that aren’t that great and checking your phone to see how long until the main act comes on. However, I really enjoyed Whenyoung’s set and from the crowd’s reaction a lot of other people did as well, clearly resonating with the well put together anthems that you can dance to but also see the emotion built in. I hope to see more of their music in the future and anticipate the release of their next album.

Sundara Karma entered the stage soon after the set had finished, playing their famous anthems such as ‘She Said’, ‘Flame’, ‘Indigo Puff’ and ‘Explore’ which I recognised immediately. Hearing their original tracks was a very nostalgic moment for me as I have very clear memories of my friends and I all having to come up with different excuses for missing the last lesson of the school day so we could get the train up to London to see Sundara Karma when they were just starting out. I felt emotional to be a part of their journey, and it is clear that they still have the same stage presence and ability to inject excitement into the venue as soon as they come on stage.

“They had everyone dancing from the first track to the last”

Like Whenyoung, they had thought about their outfits in detail, with main singer Oscar Pollock wearing a quilted corset-like piece and a cropped jacket and bassist wearing a stunning blue suit and earrings that I was jealous of. Always ones to challenge gender stereotypes, their outfits were well thought out and individual which can be difficult when there are a lot of indie bands out there. They definitely know how to entertain a crowd, as they had everyone dancing from the first track to the last and the atmosphere was one of excitement.

I was enjoying the music so much that it came as a surprise when they announced their last song, and I was reluctant for the gig to come to an end just as I felt like downing another Hooch (Dark Fruit gets boring after two).