Both the University of Nottingham men’s and ladies’ lacrosse teams defeated Nottingham Trent in spectacular fashion on Wednesday afternoon to become 2019 varsity champions. 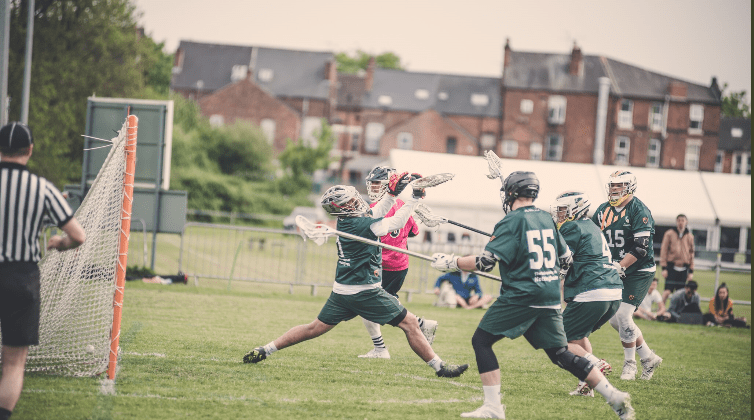 The ladies game saw a dominant performance throughout by the University of Nottingham, culminating in a comfortable 18-5 victory.

This comes as a consolation to the ladies team that suffered a bitter defeat to Oxford in the quarter final of the BUCS championship back in February.

This rather one sided affair was a good opportunity for the ladies lacrosse team to seek consolation from their premature exit from the BUCS championship, and provided those leaving the University with a proper send off. Following the impressive result, the green and golds were jubilant, with high hopes to carry into the upcoming season.

“it’s good to end our season with a win.”

Speaking to Izzy Yates shortly after the win, the first year attacker acknowledged that “it’s good to end our season with a win.”

“We’ll have a lot of our current starters here next year as well, so its good to keep on training during (the offseason), and going out with this win means that we’re going to be really excited for next year and the start of the new season.”

Men’s game goes down to the wire

Unlike the women’s game, the finale to the men’s season was a closely fought battle. The highly anticipated matchup more than lived up to its billing, with no significant gap between the two Premier North sides.

For the third time this season, two of the country’s strongest sides would face off, this time in a thrilling varsity contest. At no point in this match were there more than 2 goals between the teams, who both made crucial saves throughout.

In a very low scoring game, there was barely anything to separate the two sides, and with the final score at 7-7, there had to be one winner. The victor would be decided by a golden goal.

Men's Lacrosse is up next, face off at 4pm ?? pic.twitter.com/pIO9jqiMC0

Trent was first to attack after over time began, but some crucial defensive play from UoN allowed the Green and Gold to stay in the game.

Finally, the University of Nottingham scored the crucial game-winning goal to clinch the varsity title as 8-7 winners in spectacular fashion.

“we’ve got a good crop of young players coming in, and we’ll see what we can do.”

We spoke to goal scorer Will Prescott shortly afterwards. The first year attacker told Impact that his “natural instincts” took over when searching for the decisive goal towards the end:

“Luckily for us, it went in… obviously the nerves are going, but once you get the ball on your stick, you’re just playing lacrosse.” Prescott added that having played the sport for a long time, he was able to settle his nerves and calmly deliver the winning goal.

The men’s lacrosse team has a lot to be excited about heading into next season, with Prescott stating that, “we’ve got a good crop of young players coming in, and we’ll see what we can do.”

All in all, lacrosse at the University of Nottingham is as strong as ever, with high aspirations for both teams entering the next season. And with these two wins, UoN have now retained the varsity title overall, with the opportunity to clinch it in the coming days.

Featured image courtesy of University of Nottingham Sport, via Twitter.