My time at the University of Nottingham begins with me as a part-time student in the School of History. Part-time meaning that I was a first-year student for two years.This later extended itself to a third year as I changed my degree to Social Science because I was required to catchup on all the subjects I had missed, as I was minoring in Social Science whilst still studying History. However, from my second year onwards I studied full-time, a time that was for me the most memorable. 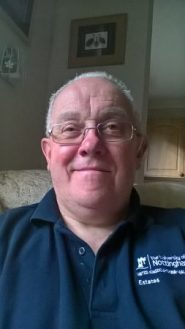 “it allowed me, in some cases, to say things those younger than me couldn’t”

Apart from being possibly the oldest student on the campus, or being old enough to be everyone’s father, being a mature student did have its advantages. In other words, it allowed me, in some cases, to say things those younger than me couldn’t, and vice versa of course, especially when some of the academics teaching us were younger. For example, quite often, especially on warm days, when half way through a seminar the lecturer would open a window to cool the atmosphere down, I would find myself saying out load, ‘I wouldn’t bother jumping, we’re on the ground floor!’

Another occasion, after all the youngsters had been out on the tiles the night before and only the walking wounded turned up the next morning, the academic who was preparing the morning lecture dragged a table across the room, thus aggravating the discomfort on those still suffering the effects of the night before! This prompted me to say – pointedly: ‘Don’t do that – there are people in here suffering, and if you must talk at least try whispering!’ As a consequence, she was overcome with a fit of the giggles thus delaying the start of the lecture.

“I was required to employ my skills as a surrogate uncle”

Many was the time as a mature student that I was required to employ my skills as a surrogate uncle. The one occasion that springs to mind happened when in my third year. Being the only male in a seminar group of girls, all young enough to be my daughters, we were all about to begin our final year dissertations, having submitted our research proposals. For some reason the lecturer decided what we had submitted wasn’t to his liking, and he told us so in no uncertain terms!

As he continued to read the academic riot act, I noticed tears welling up in certain eyes, and faces getting longer and longer. Once he dismissed us one girl was so upset, she ran into the toilet for a good cry, whilst a whole group shuffled tearfully off to the library. In my case I went for a coffee in the Portland Building where I came across the errant lecturer!

“Not being able to resist a challenge, I said to him: ‘That was a bit strong wasn’t it?”

Not being able to resist a challenge, I said to him: ‘That was a bit strong wasn’t it? I’m used to hard knocks but those poor girls, they’re in tears now!’ To which he smilingly replied: ‘You’re all alright, it’s just, amongst other things, I like pinpoint accuracy when it comes to research proposals.’

Hoping they would still be in the same place when I last saw them, I sprinted up to the library to where they were gathered, and told them the good news. As a consequence, the tears dried up, smiles returned to their faces, and they all lived happily ever after…. all thanks to dear uncle Paul!

“we have all experienced the anaesthetic lecture”

Lectures, are all part of university life, and we have all experienced the anaesthetic lecture where you have difficulty in staying awake, or ones where something happens to break the concentration. To me, that happened once in the Portland Building. It was during a lecture that the strains of dance music came from what appeared to be nowhere. As it became more of a distraction, even to the lecturer, I decided to investigate. To my surprise it was coming from the Atrium.

To cut a long story short, with curiosity finally getting the better of us all there we all were, lecturer included, with noses pressed against the window watching as the Dance Society were put through their paces to the strict tempo of Victor Silvester.

“my mother, who has since passed away, being able to see her son, once considered to be an educational failure, graduate”

The funny stories I have told are just some of many that happened during my time as a student at the University of Nottingham. Unfortunately there isn’t the time or space for more. As I once wrote, I had a few preconceived ideas about becoming a student, however nothing prepared me for what I was to experience. Yes, there were many ups and downs during my five-year period. However, on reflection I am pleased that I had the experience. In other words, it laid many ghosts of the past to rest. One of those ghosts being my mother, who has since passed away, being able to see her son, once considered to be an educational failure, graduate.

Finally, on speaking to my lecturers after graduation, they were more interested in my mother’s story because as a child she was in a crowd of school children who saw King George V and Queen Mary open the Trent Building on Tuesday 10th July, 1928!