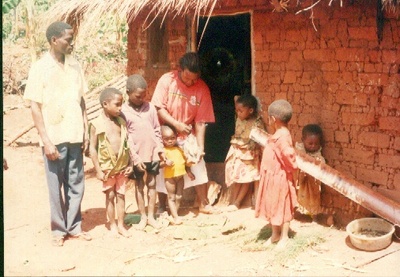 At over 2 million, the UK has a hefty student population and it is only set to grow. The colossal flux of students entering and exiting the academic wheel of university every year means that summer internships are becoming thin on the ground and graduate schemes are practically gold-dust. With so much pressure on students to develop the unique personal statement and job application, who are we kidding that this years’ stint of well-building is a purely altruistic activity? Many students would argue that volunteering abroad is a win-win scenario: both remedying our CV woes and injecting a low-income country with social, economic or environmental development. However, the reality of a short-term volunteering programme can be years of long-term impacts that aren’t necessarily beneficial to locals. The repercussions unravel as we, the instigators, obliviously finish our degrees or start our careers.

The issues surrounding volunteering programmes can be divided into the two factors rarely avoided in any aspect of our lives: time and money. Firstly, short term volunteer placements can be for as little as two weeks, meaning that workers often enter the country unprepared. Volunteers lack training in practical tasks and – more crucially – are uneducated regarding the culture of the country they are working in. As a result, the little work that is achieved is often eclipsed by a monumental culture clash when workers (sometimes unconsciously) impose their social and political values on local communities.

“the influx of money from Voluntourists will bypass local economies”

Secondly, with programed community volunteering sometimes costing over £1,200 for a fortnight, a consumer-driven industry in which workers expect their ‘money’s worth’ seems inevitable. An example of the darker side of these costs is the rise of Voluntourism. With activities ranging from volunteering opportunities in orphanages to more questionable sounding ‘slum tours’, the industry places vulnerable communities under greater threat by prioritising the experience of profit-producing volunteers over genuine improvement of conditions.

The commercialised shadows of overseas volunteering have been brought to light by campaigners and public figures such as J.K Rowling, who describes the orphanage placements as “one of the drivers of family break up in very poor countries. It incentivises ‘orphanages’ that are run as businesses”. Paradoxically, in the common case that a programme is run by a non-local travel business, the influx of money from Voluntourists will bypass local economies and line the pockets of the foreign companies using their plight for profit. With Voluntourism teetering on (or over) the edge of exploitation, should we question whether volunteering programmes as a whole are doing more harm than good?

“This controversy calls into question volunteering projects as a whole”

Just recently, yet another fracture in the concept of the ‘aid worker’ was brought into the public eye. With March being the month of Comic Relief, classic celebrity antics including a Mamma Mia parody and a much anticipated Four Weddings and a Funeral reunion have been somewhat marred by MP David Lammy’s criticism of Stacey Dooley promoting a ‘White Saviour Complex’. The row was sparked by an image taken during the filming of a malaria appeal that depicted the journalist cradling a Ugandan baby like an ‘accessory’.

This controversy calls into question volunteering projects as a whole, which could be read as both self-fulfilling and condescending towards countries deemed to be in need. Frances Brown and Derek Hall sum up the argument in their article ‘Tourism and Development in the Global South: the issues’, pointing out the danger of a mindset in which volunteers (regardless of their experience or skills) from the West can improve the lives of people in the South simply by virtue of where they come from.

“volunteers remain vectors for education in our own country”

However, criticism has been heaped on both sides: Lammy’s comments have coincided with a dive in Comic Relief donations, with the total sum set to be at its lowest since 2007. In a global society with such extreme poverty and suffering, is an £8 million drop in funds too high a price to pay for political correctness? Dooley’s response to Lammy (“David, is the issue with me being white? (Genuine question). Because if that’s the case, you could always go over there and try raise awareness?”) suggests that allegations of neo-colonial narratives in foreign intervention can be more damaging than ethically beneficial.

Perhaps we should contrast Dooley’s campaign with another viral image from August 2018, in which an Argentinian police officer breast-fed a baby malnourished by her drug-addicted parents. The officer was promoted to Sergeant and the photograph was adopted worldwide as an emblem of selfless outreach to those in need. Where was the media storm about the ethics and motivations of this act of compassion?

If one thing can be made clear from the debates surrounding the ethics of volunteering, it is that a blanket label on volunteers abroad as redundant or even damaging would be taking a step backwards. Despite the risk of initial miscommunication (particularly with uneducated short-term workers), volunteers remain vectors for education in our own country, returning to their homes and academic institutions with new-found knowledge of the social and political values of regions that are often not considered beyond their relative poverty.

If you would like to write Travel articles for Impact Lifestyle drop us an email at lifestyle@impactnottingham.com

Comfort Films – The Medicine We All Need