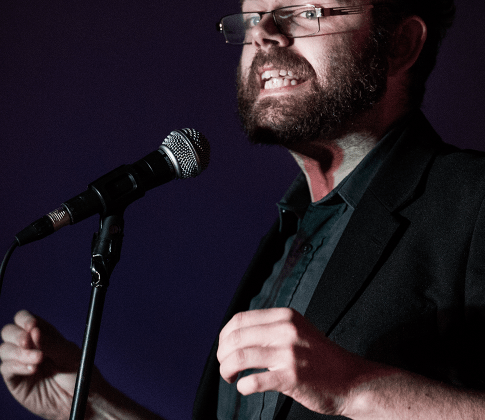 Genre Fluid is Dan Webber’s first collection of poetry, formed after three years of touring and performing spoken word shows. Describing itself as ‘a study into labels in everyday life, in the arts and the LGBT+ community’, Genre Fluid is a humourous yet reflective and candid exploration of how we define ourselves.

One of the most interesting and noticeable aspects of Genre Fluid is its layout. Translating a spoken word show into a series of print poems and successfully capturing the mood of a live performance is no mean feat, yet Genre Fluid blends the boundaries of spoken word and print publishing. Having had the pleasure of seeing Dan Webber perform, I was also pleased to find that in print his poetry maintains the high energy of his set.

Likewise, the ‘set list’ contents page and notes to the audience between each section allow the reader to connect with the poet as these notes provide anecdotal moments contextualizing the poems whilst offering a sense of Dan Webber’s on-stage personality. There is a strong sense of the poet’s voice and perceptions throughout Genre Fluid, across the different moods and tones in this collection. Several of the poems read as though you were listening to the words of a close friend.

“There is a strong sense of the poet’s voice and perceptions throughout Genre Fluid, across the different moods and tones in this collection. “

Genre Fluid’s opening poem ‘Edinburgh’ sets the theme of identity, particularly within the arts industry, to the forefront of the reader’s mind. The first image in ‘Edinburgh’ of ‘pissing over a flyer that’s been crammed down a/urinal’ sets up the wry humour and unflinching honesty that forms an undertone throughout the collection. Such humour makes the poetry a pleasure to read yet also calls social issues into question. For instance, ‘Moobs’ is a tongue in cheek, rollicking poem and a reminder of the hypocrisy over how acceptable it is to display male or female body parts in public.

Many poems in the collection make use of rhyme, particularly internal rhyme, to create a pace and rhythm that maintains the buoyancy of Dan Webber’s live performances. The poem ‘T’ stood out in how its swift pace encapsulated the sensation of a crush. Genre Fluid keeps the conversational tone of spoken word but contains imaginative use of poetic form, from rhyme to wordplay. The final poem in the section ‘poems about boys’, ‘Prince’, presents the disappointments of a one-sided relationship, altering the mood from the light-heartedness of earlier poems.

Here the poems offer further honesty in reflecting on the pressures placed upon gay men when trying to date. One of the more sombre poems in the collection, ‘Child of the 90s’ reflects upon an experience familiar to many in the LGBT+ community: ‘Her name/They assume/And suddenly I’m alone in a crowded room’. These later sections of Genre Fluid also address instances of homophobia and transphobia, turning these interactions into a powerful reminder that ‘if no one speaks, nothing ever changes’ (‘Some People Never Learn’).

This culminates in the final section, titled ‘not being funny’, in which Dan addresses his mental health, having a profession within the arts industry and writes a poem to his younger self. ‘17 Squared’ brings the collection back to the opening poem of performing in Edinburgh by considering the expectations and uncertainty of working in the arts. Again, Dan draws on personal experiences yet creates poems that remain relatable- haven’t we all wondered if we’ve made it in life? His use of the cliché changing a lightbulb, followed by the remark that ‘The light above my head is yet to flicker/As everything falls into place’, captures a sense of uncertainty many of us will have felt. The final poem of Genre Fluid, ‘Happy Anniversary’, makes for a fitting ending as Dan takes his reflections on labels, dating and the arts to offer a poem of advice to his younger self. The ironic closing lines ‘But if you must, never perform it/No one should be forced to sit through those’ allows the humour within Genre Fluid to exist alongside its serious reflections.

Genre Fluid is a unique insight into the arts and LGBT+ community, blurring comedy and poetry, spoken word performance and print publication to provide a witty and frank portrayal of relationships and the way we define ourselves and others.

Genre Fluid is released on 7th June at the Quad cinema and art gallery as part of Derby Book Festival. For more information or to book tickets, see the Derby Book Festival website: [http://www.derbybookfestival.co.uk/whats-on/genre-fluid-with-dan-webber/]. You can also find Dan Webber on Facebook at Dan Webber- Spoken Word.

Look Out For… JULY