Moscow: the City of Contrasts 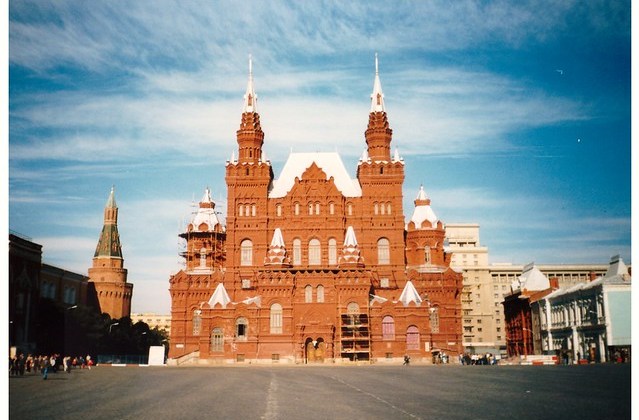 What do you think when you hear the word ‘Moscow’? It may be the Kremlin’s clock tower, Lenin’s mausoleum or a church that looks like a gingerbread house, but this is definitely not the full list of the places worth visiting.

You never know where will you end up: will you find a magnificent 16th century church with golden decorations inside or a modern international business centre with skyscrapers? I utterly fell in love with this city: it is breathtakingly beautiful and the people there are unique – meeting them led to to some of the craziest stories…

“That’s Moscow – people will not smile at you in the street, but will help climb over the fence and dance with you”

The first or second Saturday of September is a special day for moscowians: ‘the day of the city’ (I guess, when you live there, you do want to celebrate it!), and in honour of this feast a huge free musical concert is organised!

The warm weather of the beginning of September; the soft smell of the flowers and music – loud, well-known music that everyone knows the lyrics to; an excited crowd of people, all shouting  along with the artist, and hearts beating along with the beat.

To prevent overcrowding, the venue was divided into sectors by metal railings: once the sector is full, you should be unable to enter it. The theory was great, but then the backs of some sectors closer to the stage were less crowded than other sectors; and also, you can’t really say ‘no’ to Russians!

We came to terms with the fact that we’d just stay crammed near the railing, but then some complete strangers gave us a hand (literally!), and within seconds I found myself over the barrier, in a significantly more spacious part.

When it came to the most well-known artist on stage, my friend and I got acquainted with some friendly people from the crowd, and we all ended up creating a semi-circle – by putting our arms around another peron’s waists – and dancing, laughing and jumping together until the last song. That’s Moscow – people will not smile at you in the street, but will help climb over the fence and dance with you.

“I could hardly step on my bandaged right leg, I had no cash for a taxi home, and had no clue where I was”

After the concert I managed to hit my toe pretty badly, while opening a heavy front door and had to take a taxi to A&E. By the time I left it, it was around two in the morning, I could hardly step on my bandaged right leg, I had no cash for a taxi home, and had no clue where I was. Exciting!

After I limped my way across the road, a police car stopped in front of me and two police officers asked if I can show them my documents. Luckily, I did have my passport, so they started asking about what happened to my foot and made a few jokes about it.

They laughed after I asked where the nearest cashpoint was, but then took me almost all the way home, because: “Aren’t you scared? You might get robbed or raped here.” Ironic, considering they are the police.

In October I had a craving to go to Sokolniki — a park in the northeast of the city, even though I only heard about it a couple of times. My friend and I left the underground and found ourselves in a hustling square, near McDonald’s.

Five minutes later we were on the main walking road of the park, surrounded by lots of people. Some were promenading, some riding a bicycle, some listening to the street musicians. The noise of talking combined with the nose of wheels and street music…

We didn’t look at the map, just took a small footpath, and disappeared into the forest. The trees on either side dazzled with leaves in different shades of orange and yellow and the sunlight made them look even brighter, the rustle of the leaves beneath our footsteps was the only source of sound. Soon there was no one else around, and we started picking the most colourful leaves we could find from the ground.

“At that moment you start questioning ‘am I really still in Moscow? It feels like somewhere faraway…'”

The best part about walking in the unknown park is that you don’t know what you’ll find. We found balloons stuck in a tree, a stall selling corn on the cob and a ferris wheel that gives you five minutes to absorb the spectacular autumn beauty from above. At that moment you start questioning ‘am I really still in Moscow? It feels like somewhere faraway…’

As we walked towards the exit with a wreath made out of leaves, many older women stopped to compliment us, and someone even asked to take a picture of us.

Moscow really is the city of contrasts! From crowded squares into narrow, quiet streets, from grumpy-looking and never smiling people to those who stop to make you a compliment. From knowing you’re in the city for the first time, to feeling at home there.