Jesse gives her thoughts on the bewitching and awe-inspiring evening of poetry at Nottingham Playhouse for their ‘A Quite Enormous Poetry Event’.

Whilst many of us know the 3rd of October from that iconic Mean Girls scene, this date is important for marking the 25th anniversary of National Poetry Day. As part of the celebrations, I had the exciting opportunity of watching ‘A Quite Enormous Poetry Event’; a poetry performance showcasing the talents of 9 poets from across the Midlands.

I arrived at the Nottingham Playhouse (located about a 5 minute walk from the Royal exchange tram stop) at about 7pm, giving myself an hour to explore the Poetry Funfair before the main event began. 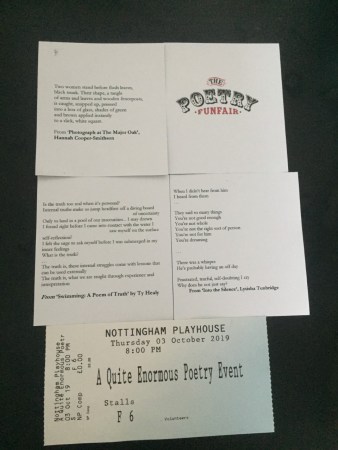 Setting into the foyer I was greeted by many friendly ringleaders in sequined hats and was directed to the different stalls, all celebrating this year’s poetry theme; truth.

“Right from the beginning I was pleasantly surprised by how welcoming the atmosphere was.”

The first person I visited was Matt Miller, who dazzled with poignant words and awesome magic tricks from his upcoming show ‘Fitting’, which explores gender identity, visibility and invisibility. If you ever get the chance to see him, I would definitely recommend it!

After this I drifted over to Madame Poetica, a poetic fortune teller who I was very excited about. She had me hold my hands over a glowing ball to discover my ‘truth colour’ (it’s turquoise, for whoever might be wondering) before giving me my fortune poem, ‘Photograph at The Major Oak’ by Hannah Cooper-Smithson.

My final stop downstairs was a stall with a jar of sweets wrapped up with poetry prompts, which lead to me writing a not-so-masterful verse about my love of burritos, which I had the opportunity to read in front of a camera upstairs. 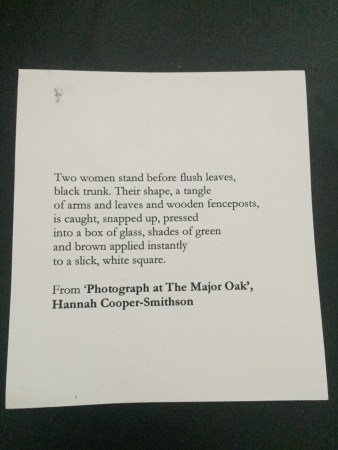 After this it was time to take to our seats. One of the first things that struck me when entering the auditorium was the number of musical instruments on stage; I thought I was attending a spoken word event, not a music gig! The setup belonged to Dizareli, a rapper, poet and musician who was headlining the event (more on him later).

The show was opened by host Ben Norris, who put together this event. Right from the beginning I was pleasantly surprised by how welcoming the atmosphere was. Audience members were encouraged to cheer and clap for the poets as they came on.

As is common at spoken word events, even when the poets were performing, the scattered sounds of clicks and ‘mms’ would resound from audience members with whom a particular line resonated.

Following him was Georgina Wilding, Nottingham’s first young poet laureate, who performed some deeply personal poems exploring home, self-perception and family. Third up was Bohdan Piaskeki, a poet living in Birmingham but originally from Poland- his beautiful poem about his children proved that you don’t need to speak a language be moved by it.

Vanessa Kisuule, the official poet of Bristol came next, with a story about female friendship which had me longing for a girls night out. Next up was a poet called Will Harris, who, along with his work, humbly performed a piece from another poet.

The last poet from the first act was Caroline Bird, an impressive poet who became a published author at 15 and has had 4 books out since. Her cleverly titled poem ‘Loveburugh’ explored the difficulties of romantic relationships.

After a quick interval which I spent frantically scribbling notes in my notebook, the show started up again. It kicked off with Jamie Thrasivoulou, official poet of Derby County Football Club. With a laid back attitude, he owned the stage. Dressed in trackies and a beer in hand, his words instantly transported us to our local pub.

Following his amusing and carefully timed 5 minute slot came Debris Stevenson, whose rhythmic poems left the biggest impression on me. I would definitely recommend checking her performances out on Youtube.

Last but by no means least of the supporting poets came Liz Berry, a lady with one of the loveliest voices I’ve ever heard. Her dreamy poems about waitresses and gardens showed that it’s possible to romanticise almost anything, and the beauty of doing so.

Our headliner Dizareli then took to the stage. Instantly the energy of the audience was raised as he and his band produced a musical mayhem of drums, synth and vocals raised in unconventional harmonies. Although it felt a little strange, witnessing such an electric performance whilst seated in the plush chairs of the theatre, many an audience member found ways of moving despite being confined to their seats.

Whilst Dizareli and his band weren’t exactly my cup of tea, even I enjoyed his power anthem about his mum, which involved some audience participation – we were encouraged to sing along to the melody.

Too soon, the night was over, and it was time to step back out into the rain and make my way home. I thoroughly enjoyed my first night of poetry and know for a fact that it won’t be my last.