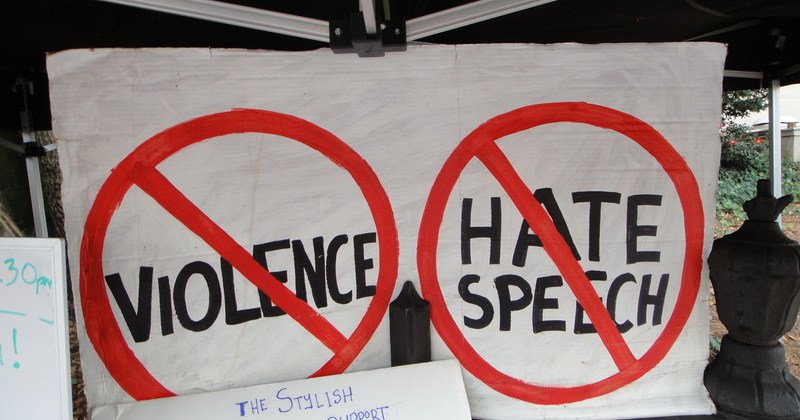 Lately, looking at your Twitter feed is like playing millennial Russian roulette; you never know if you’re about to see a cute dog video or a racist tweet that went viral. Every day we hear about another famous person making an offensive comment causing mass outrage, such as Boris Johnson comparing Muslim women in burkas to letter boxes. We are constantly bombarded by scandalous statements made with one aim in mind – to get a reaction, and they always do. Katie Hopkins and Piers Morgan are classic offenders, expressing at best inflammatory, and at worst, hateful ideas under the guise of free speech. Controversy and outrage are the bread and butter of these divisive “celebrities”. However, where does a controversial opinion end and hate speech begin?

Article 10 of the Human Rights Act of 1998 states that “everyone has the right to freedom of expression” in the UK, however this law is “subject to formalities, conditions, restrictions or penalties”. These restrictions can be enforced for the “prevention of crime” and to protect “health or morals [and] reputation or right of others”.

Much of what reactionary personalities express as their “views” is thinly veiled hate speech.

This means that freedom of speech, contrary to popular belief, does not mean that you can express any view without consequence. The law on hate speech is described as “expressions of hatred towards someone on account of that person’s colour, race, disability, nationality (including citizenship), ethnic or national origin, religion, gender identity, or sexual orientation”. Considering what constitutes as hate speech, we can clearly see that much of what reactionary personalities express as their “views” is thinly veiled hate speech.

To take infamous Katie Hopkins as an example, in 2015, she called migrants “cockroaches”, the “norovirus” and a “plague of feral humans” in her column for The Sun. She left Mail Online only days after giving a speech attacking Muslims and calling on people to “fight for their country”.

Your hate? My strength.

Keep going ankle biters. You are the fuel to my fire.

You amplify my truths that the mainstream will not tell. pic.twitter.com/h5rCbCIa5U

This was not first time she made hateful and racist comments about Muslims. In 2015 a family planned to holiday to Disneyland when they were stopped by US authorities at Gatwick airport. In response to this, she wrote in an article: “you can’t blame America for not letting this lot travel to Disneyland – I wouldn’t either”. She wrongly linked to family to al-Qaeda in two of her articles. The Mail Online removed the story and Hopkins was forced to apologise to the family for calling them extremists.

She has repeatedly boasted about being reported to the police for hate crime and inciting violence, as well as about her Twitter account receiving “more complaints than a transsexual getting a wax”. The only time she managed to defend herself and win in court, was when the Daily Mirror incorrectly reported her detainment by South African authorities was the result of her taking ketamine; she insisted it was in fact for spreading racial hatred. Choose your fighter.

Another defender of the “outspoken” – Piers Morgan, went from a local newspaper reporter to one of Britain’s best-known personalities in just over 30 years. In that time, he carefully cultivated his divisive persona, which attracts attention for various reasons. His position at Good Morning Britain has allowed him to express outrage about the LGBT community, plus-sized models, veganism and vegetarianism, safe spaces, gender neutral clothing and more.

Bad news Max, sorry…
I've been sensationally saved for the nation & will be back on @GMB on Monday.
So God didn't come through for you this time, but keep praying. https://t.co/6XySa3NsnG

In fact, his 2019 New Year’s Resolution was to “be just as annoying, argumentative & insufferably right about everything […] Zero apologies in advance to all the whiny PC-crazed snowflake imbeciles who will be horrifically offended by absolutely everything I say or write”.

The petition to “remove” him from Good Morning Britain, signed by more than 33,000 people, was the result of widespread backlash towards his rants about gender, stating that he now identifies as a “penguin” in September of this year. The ever-controversial figure seems to have a very loose understanding of free speech, tweeting: “Free speech is free speech. Problem with today’s liberals […] is they think their view is the only view that should be heard”. The pot calling the kettle black?

Talk shows or your Twitter feed, which operate as a megaphone, carrying their dangerous ideas to whomever will listen

Nevertheless, as divisive as these media personalities can be, they still maintain a platform, be it newspapers, talk shows or your Twitter feed, which operate as a megaphone, carrying their dangerous ideas to whomever will listen. Surprisingly (or perhaps not so much in this Brexit age) some people not only listen but agree.

Perhaps we cannot fully turn off these hateful voices, but we can certainly turn the volume down.

As much as we want to drown out their voices, retweets and articles, reacting to their latest offensive comments, continue to amplify their voices. Should we allow for this to go on or should we limit, or remove, their platform? Where do we draw the line between a controversial opinion and outright hate speech? It seems to spread malicious ideas, you only need to argue that someone is trying to stop you from doing so. Perhaps we cannot fully turn off these hateful voices, but we can certainly turn the volume down.

A recent example comes from Katie Hopkins’ Brunel University appearance, where students emphatically shut her down by filling a theatre for a debate featuring her, then turning their backs to her when she spoke, and walking out of the auditorium.

Perhaps, we can start by identifying comments made by these personalities as hate speech rather than a “controversial opinion” and removing their spotlight. Exaggerated fears of censorship have allowed for hate speech to be normalised and for minorities to be silenced. Majority of hate speech online goes unpunished, as every time we correctly identify hate speech, the offender in question cries political correctness.

The right to express an unpopular opinion is to say you like marmite, not to spread hatred and discrimination

The right to express an unpopular opinion is to say you like marmite, not to spread hatred and discrimination. We cannot stand by as people, who seek to divide us, undermine free speech and threaten our society. If that means getting Katie Hopkins’ Twitter deactivated or Piers Morgan off the air, then that’s where we start.

Featured image courtesy of John S. Quarterman via Flickr. Image license found here. No changes were made to this image.

In article image 1 courtesy of @KTHopkins via Twitter. No changes were made to this image.

In article image 2 courtesy of @piersmorgan via Twitter. No changes were made to this image.

Black History Month: When Will We Show Racism in Football the Red Card?