IT Chapter 2: We Don’t All Live Up to Expectations Down Here

Warning: minor spoilers for IT: Chapter 2.

The sequel to the much-celebrated IT has finally arrived, and brought one of King’s most famous properties fully to life. Unfortunately, not all sequels can live up to the hype of the original.

Andy Muschietti made a brave decision when deciding to split his IT adaptation into two separate films, focusing on the Losers’ Club as children, then 27 years later as adults. The latter half was always going to be a difficult challenge, as their respective chapters in King’s novel are universally accepted as the least interesting, most bloated aspects of the book. However, with the record-breaking success IT had back in 2017, expectations were high for the follow up.

But despite a stellar cast and some fun sequences, IT: Chapter 2 fails to deliver the same level of storytelling as its predecessor.

“Perhaps the biggest challenge the film faces is with the story no longer being from the POV of a group of kids. Everything is objectively less scary; even with an alien posing as a killer clown, adults are rooted in logic and reason.”

The main problem IT: Chapter 2 faces is its extensive runtime; the movie clocks in at nearly three hours long. Stepping back and reflecting on the narrative events, it is astounding to conceive how little ground the film manages to cover over such a long time. Entire scenes could have been left on the cutting room floor with little to no change.

In spite of this length there was very little character or plot development. Rather than exploring themes such as domestic abuse (in the case of Bev) or the history and lore of Derry, IT: Chapter 2 instead gives us an inordinate number of flashback sequences, run-of-the-mill horror scenes and trivial dialogue.

The flashback sequences feel like they make up an unjustifiable percentage of the runtime. Although checking back in with the old familiar faces, such as Finn Wolfhard’s Eddie, is a nice nostalgic rush, the constant jumping back becomes grating. Many of these sequences feel like bonus deleted scenes, more suited for the Blu-Ray release.

The narrative would have benefited by spending more time with the grown-up versions of the kids; exploring their development and group dynamic. Beverley’s abusive relationship is almost entirely glossed over after one gruelling scene early on, and her husband is barely being mentioned again.

It’s a shame that such a sublime cast were not given enough time to explore and develop their roles further. If the acting had not been so good, or the casting so spookily spot on, then the film would have been in danger of its protagonists feeling like strangers. However, McAvoy, Chastain and the rest of the cast had clearly studied their younger counterparts – picking up their mannerisms and ticks to make their performances more believable. 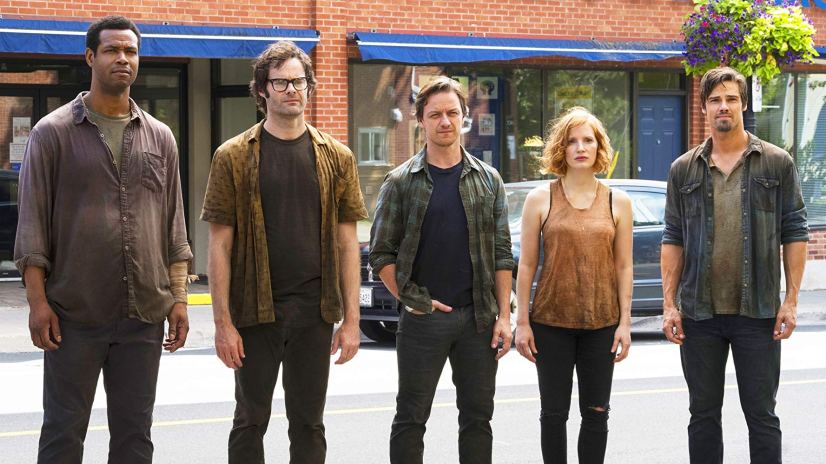 IT: Chapter 2 is considerably less scary than the first film. For starters, Pennywise has lost the element of surprise. When Bill Skarsgård made his entrance as the dancing clown back in 2017, the unpredictable voice, uneasy blend of real-life with CGI and the unnerving physical performance was a standout for audiences. With the help of advanced technology, Skarsgård was able to bring a new and different spin to the character.

That initial shock however has passed, and Pennywise seems to have run out of tricks up his sleeve – not only in the character’s presence, but in the way in which most of the scares are constructed. Less is more, particularly in building tension. Rather than sparingly revealing Pennywise, as was the case with the first film, he is used far more blatantly and excessively within Chapter 2. The scares themselves begin to feel repetitive, falling into one of two categories: either Pennywise targets a young child with whom we have no emotional connection, or in a flashback, a member of the Losers’ Club will be scared with no stakes whatsoever, as we already know the outcome.

“The solution to the problem of starring adult characters could have been in the form of Henry Bowers; built up to be a serious threat early on within the film.”

Perhaps the biggest challenge the film faces is with the story no longer being from the POV of a group of kids. Everything is objectively less scary; even with an alien posing as a killer clown, adults are rooted in logic and reason. Despite one of the main themes of IT being childhood belief, with ordinary objects becoming monster killing weapons, this concept feels half-baked within the film. The overall tone of the film feels less creepy.

The town of Derry is as much of a character as anyone else within the book and first film – one that’s unsettling and unnerving. Besides the grizzly opening scene, this feeling is missing within IT: Chapter 2 – it could be set in any small American town.

The solution to the problem of starring adult characters could have been in the form of Henry Bowers; built up to be a serious threat early on in the film. Displaying real life anxieties and an unpredictability which Pennywise has lost, Bowers is perhaps even more unhinged and terrifying than the killer clown. Unfortunately, all of this potential is wasted entirely, with Bowers barely making an impact on the story, aside from popping up for arguably the best scare of the film.

Although it may be hard to believe, I did enjoy IT: Chapter 2. Watching this film however was frustrating as a fan of the books, the first film and a movie goer in general. Perhaps expectations were too high, an impossible task to live up to. Perhaps a tighter runtime, more focus on the adult Losers’ Club, and reinvention of the horror sequences would have improved the film. Or perhaps, as he has now seemingly accepted, Stephen King simply cannot stick the ending.