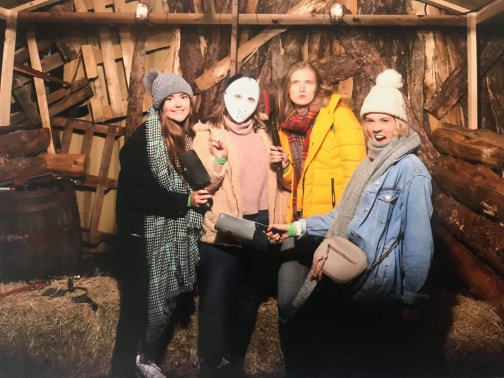 Situated in Staffordshire at the National Forest Adventure Farm, Screamfest is a scare park which welcomes over 22,000 visitors every year for a night of horror and laughter in equal measure. With five scares to experience, Impact were invited to the preview night to see what all the fuss was about.

We were apprehensive as all four of us consider ourselves jumpy, scaredy-cats but looked forward to the challenge. Before we had even gone into any attractions, we had Pennywise, Saw’s Billy the Puppeton his tricycle and all manner of clowns and beautifully costumed creatures on stilts moving around us.

Their appearances were impressive (if not unnerving) and their interactions with people were hilarious as long as you weren’t on the receiving end. They would walk silently up to people and stand behind them, scaring them out of their minds. One thing we learnt early on is that, whatever you do, don’t run as they will chase you! This set the scene nicely and showed we definitely weren’t ready for the attractions ahead.

“Every turn brought a new jump scare, with inhuman looking people screaming at you in cages”

The artistry of the event was brilliant, with costumes, make up and acting on point. The new attraction, ‘Hillbilly Joe’s Zombee Zoo’ was the first that we were victim to, and just being in the queue was enough to make me on edge. When entering the ‘hillbilly’ house, every turn brought a new jump scare, with inhuman looking people screaming at you in cages. Following the course of the attraction, which was both inside and out, it had everything you’d want from a zombie scare ride. By using strobe lighting, illusions and prosthetics, Screamfest was a night I certainly won’t forget in a while.

This scare brought the circus to life with disorientating strobe lights, a plethora of psychedelic patterns and the bright colours you’d expect. It seemed like the funhouse of a child’s dreams as it was decorated perfectly with massive bouncy balls, ropes and distorting mirrors, but add in garish clowns that appear out of nowhere, block your path and back you into a corner and it doesn’t seem as appealing. We tried our best to avoid the oncoming clowns but got confused by the many dead ends, wrong turns and the disappearance of lighting, bouncing off a gigantic ball in my hurried escape. The only thing that kept us going was knowing the actors weren’t allowed to touch us so we would find a way out eventually. Certainly a memorable nightmare.

“This scare brought the circus to life with disorientating strobe lights, a plethora of psychedelic patterns and the bright colours you’d expect”

After experiencing the Day of the Dead attraction, I can officially say the sound of a chainsaw will never be the same again…

The ride commenced with a short drive in a cattle truck to the maize maze which was located away from the main event. Climbing down from a truck in very cold weather into the middle of a farm was also the moment I realised wearing my new white trainers probably wasn’t the best idea, so if any practical tips can be applied to Screamfest then footwear is a good starting point.

The sound of chainsaws was emanating from the distance, but it was only once I was within the maze beyond the point of return that I realised what we were all in for. Actors with chainsaws slightly too realistic for my liking were hiding at various points and either jumping out or chasing you. This was also when I realised my throat was becoming sore solely due to screaming at the evening’s horrors.

Included in the attraction were tunnels that oozed claustrophobia, an array of fright actors, gravestones and Halloween-style decorations that were scattered throughout. Horrific.

“The effort that has gone into its aesthetics is evident”

Certainly a very different scare based on a pretty unconventional dating agency set in a sewer. The effort that has gone into its aesthetics is evident: you start the journey in some disgusting toilet cubicles that even smell like sewage works and enter a misty, underground area where water drips from every orifice. As well as being very scared by the actors who follow you and jump out at every given moment, I was repulsed by the setting making me want to get out even quicker. Definitely worth experiencing this scare solely for the creativity of its design.

Having come out of Love Hurts, we lingered near the exit of Insomnia, hearing a lady cry she had wet herself a bit, and another man tell his mates he was going to have nightmares.

Even just seeing the little girl, Tabitha, for the first time freaked me out. She was dressed in a nightie, drawing a picture of a house with a red door, and kindly asked if we would like to keep it – an offer I declined. After walking through the first door, the same scene of Tabitha’s bedroom came into view, and again we were watching from the sidelines, as she cried and called out her mother’s name, a creepy man continually appearing at her window…

“Escaping one room, we entered another into Tabitha’s dream world”

Escaping one room, we entered another into Tabitha’s dream world: over a bridge, with clouds above our heads, and a lovely rainbow painted on the wall.

Next was a seemingly never-ending maze of mirrors – jumping at my own reflection. I was pretty desperate get out (whilst struggling to see through my hands), but when a man ran up to us and yelled that the exit was “this way” I was in no way inclined to trust him. However, after stumbling around in circles, we didn’t really have much choice. The final room was empty (apart from Tabitha’s bed and wardrobe) and by this point I didn’t hang about for any surprises and charged towards what was (thankfully) the real exit.

We came out of Screamfest proud of ourselves, with one too many memories of the attractions, and a bruise on a hand that was squeezed way too tightly. Not too far away from Nottingham by car, it is definitely worth a visit if you are into scaring yourself silly, but I know, for most of us, that once was definitely enough and we’re just happy to have survived.

IT Chapter 2: We Don’t All Live Up to Expectations Down Here