Why We Love Untitled Goose Game

The gaming community right now is obsessed with House House’s Untitled Goose Game, and at first glance it seems like just another trend people are jumping on. However, the game is actually the perfect example of a simple idea executed brilliantly.

The point of the game is to inconvenience an entire village. This is not an exaggeration; everyone this goose meets, this goose messes with. And it does so beautifully. This game is a masterpiece in terms of just pure, well-developed fun that doesn’t fall into the “quirky bug filled game” meta.

It’s soothing to be the menace rather than face it

Handling the goose is easy, solving small puzzles that don’t include any maths is fun, and I can and will honk aggressively at anyone that even breathes in my direction. (I would recommend this game to anyone at Notts who’s ever been inconvenienced by the local gaggle wandering across campus. They’re very scary and very slow, and once I decided to turn back and abandon my lecture rather than wade through the oncoming storm. It’s soothing to be the menace rather than face it for once.) 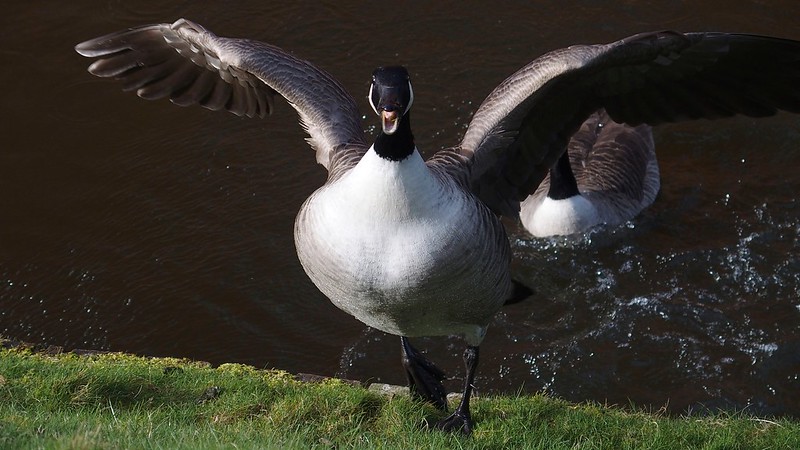 It’s a game that’s fun to watch and fun to play due to its excellently measured components. It’s not like Coffee Stain Studio’s Goat Simulator (2014), where all entertainment came from being a lazy bug-filled parody with quirky jokes and dumb noises; or like the confoundingly still popular Happy Wheels from Fancy Force – which is seven months away from being a decade old.

There’s no blood splattering the screen or glitches flinging you across the world for the trillionth time. Neither is it only trending due to its horrific content – unlike 2018 RLR Training Inc game Super Seducer or Eeki Games’ House Party (2017) where assault, nudity and casual misogyny are commonplace. These games are prime YouTube bait; sexual and terrible, the perfect Venn diagram for producing low-effort yet entertaining videos.

This is why I think this game is so popular, and why I think it’s good for the gaming community. It’s entertaining because of its novelty and quirkiness, but it captured people’s attention for longer than five minutes due to the actually engaging gameplay.

You don’t have to controversial to be excellent

Goose Game is well-made, which encourages developers to make these types of games instead of a thrown-together gorefest or gross-out to attract YouTubers. Gaming YouTube could stand to have a few more games about a harmless goose bothering people, and a few less of the gun-filled murder sprees that usually pollute the trending tab.

I hope this is the start of something new for the gaming community. The large-scale success of Goose Game videos has proven that non-violent video games can be huge attractors, and also that games don’t have to be controversial to be excellent. With the bad rep we get already, let’s just be happy with this new influx of mum-friendly content to enjoy.