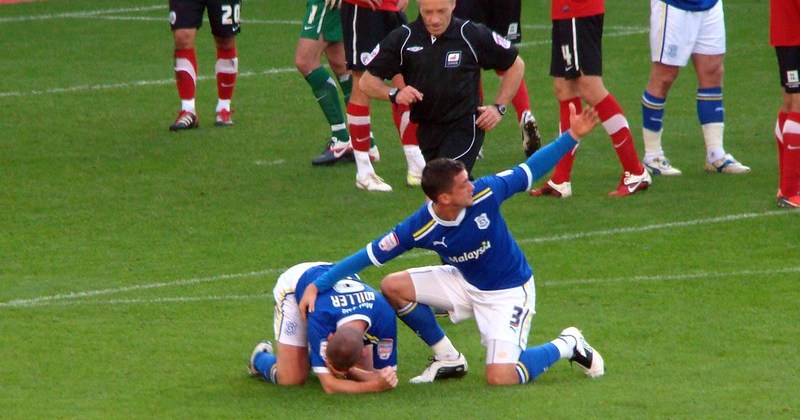 When Daniel James fell to the ground following an aerial collision during Wales’ Euro 2020 qualifier against Croatia earlier this month, he appeared to have been knocked unconscious. He was treated by the medical staff and, after passing concussion tests at half time, finished the game.

Afterwards his manager, Ryan Giggs, claimed that James had never been unconscious, rather that he was being ‘streetwise’, simply ‘using his nous’. Brain injury charity Headway were outraged at the idea of concussion protocol being used to gain some sort of advantage. Chief Executive Peter McCabe said: “If that is the case and James was ‘acting’, it raises serious questions about the player’s understanding of the seriousness of concussion. Not only has he put his own medical team under intense and unfair scrutiny, but he’s also set a dangerous example for the millions watching at home.”

Even when helmets are used, the threat of head injuries remains real

Head injuries are not something which should be taken lightly. There have been a number of serious incidents across multiple sports this year, most recently the death of boxer Patrick Day, who died aged 27 four days after being knocked out in his fight against Charles Conwell. Day is the fourth death in the sport in recent months and there has been subsequent demand for greater protection for fighters. Although some see it as an inevitable risk of the sport, Headway’s demands for the ‘senseless sport’ to be banned raises the question of whether sporting achievement is valued above athlete’s lives.

Concussion is one of the most common head injuries, but is best treated when diagnosed quickly. Protocols in several sports are framed around avoiding what’s known as ‘second-impact syndrome’ – where the brain’s vulnerability worsens the outcome of another impact to the head, and so insist on athletes being removed from the situation. With the risk of serious brain injury so high, it is clear why there were concerns over Daniel James being allowed to play on when it appeared he had been unconscious.

Symptoms of head injuries can take time to present themselves, putting players in danger if they are allowed to continue, even if they insist themselves that they are fit

Even when helmets are used, the threat of head injuries remains real. Cricket has had serious instances of players suffering from head injuries, leading to the introduction of its own concussion guidelines. Australian batsman Steve Smith suffered from concussion during the 2nd Ashes Test this summer and after receiving treatment on the field was eventually substituted off – the first instance of a ‘concussion substitute’ in the sport. He missed the 3rd Test after failing to pass medical examinations. This would have been a particularly worrying moment for Australian cricket. In 2014, fellow batsman Phillip Hughes was struck by a ball in an area his helmet failed to protect and after falling unconscious on the field, he died in hospital days later in a medically induced coma. Hughes’ death was a rare tragedy and the outcome could not have been prevented regardless of protocol, but development of such concussion procedures even in non-contact sports demonstrate how seriously the threat of head injuries is and should be taken.

Concussion substitutes is an idea also being floated around football, and if in place, would have likely been used in Daniel James’ case. Medical teams typically take around 3 minutes to examine a player following a head injury, but the introduction of these substitutions would to allow more time for a thorough examination in the interest of player welfare. Symptoms of head injuries can take time to present themselves, putting players in danger if they are allowed to continue, even if they insist themselves that they are fit.

In appearing to be unconscious yet being allowed to play on, James sent out a message directly undermining all medical guidance, showing a complete lack of understanding of the severity of the situation. A promising young player has potentially turned himself into the boy who cried wolf; supported by his manager, he has placed a seed of doubt into people’s minds as to whether all injuries are real or tactical, which is simply unacceptable. Head injuries need to be treated with the upmost importance in all sports, with the safety of all athletes always the priority.

Featured image courtesy of Jon Candy via Flickr. No changes were made to this image. Image use license here.

Why We Love Untitled Goose Game