Books and Comics That Should Be Adapted for Film and TV

I’ve always been a book lover. And a film lover. And a lover of book-to-film adaptations. With that said, there’s quite a few books that still need to be translated onscreen.

The series starts with university student David, who takes a room in the house of a mother and daughter duo – Liz and Lucy Pennykettle. He senses an air of mystery around the household which may have something to do with the clay dragons that the Pennykettle’s create. It’s not until David starts writing an unassuming story about a squirrel that frequents the local park that the magic comes to life. Literally. His story, as well as the clay dragons, come to life.

“This is my favourite childhood book series and I feel like this is the best time for this to enter the onscreen space. CGI has massively improved.”

The magic grows as the series goes on as David delves further into the dragon universe with polar bears, witches and dark matter – the latter of whom want the Pennykettle magic.

This is my favourite childhood book series and I feel like this is the best time for this to enter the onscreen space. CGI has massively improved – with films like Avengers Endgame and Fantastic Beasts and Where to Find Them making it big in recent years.

As a TV series, there would be enough time for the storyline to be explained and expanded upon as well as the magical world to made in the detail it deserves.

The Best That We Could Do by Thi Bui

I was introduced to this graphic novel via my course and I believe more people need to know about it due to its alternative perspective on the Vietnam War. Written and illustrated by Thi Bui, this memoir not only covers her life but that of her parents.

After an introduction where Bui bumps into an old friend as well as an illustrated timeline of the events of the Vietnam War, she begins her story in the hospital about to give birth to her first child. This leads her to talk to her parents about their escape from South Vietnam in the 1970s, revealing the sacrifices and unacknowledged acts of love it takes to save a family and build new lives in a foreign country. 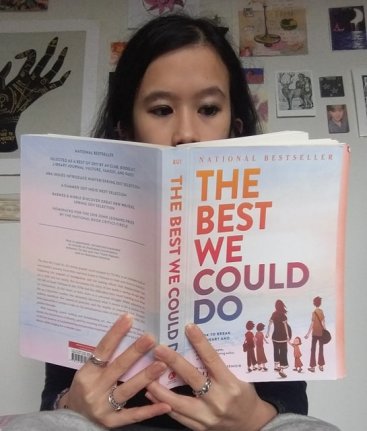 This choice was inspired by Studio Ghibli’s The Tale of Princess Kaguya. The animation of Kaguya purposely looks hand-drawn – hence my belief that The Best That We Could Do would succeed too. I think it would be interesting to see how an animator would use the wash of red that Bui uses throughout the graphic memoir. I feel it would be a good tool for transitions as illustrations could break forth from it or push scenes along.

Chaos Walking is a trilogy of books that are set in a dystopian future where humans have colonized a new planet, named The New World.

What they did not expect was that they would develop a disease called the Noise which humanity blame the native race, the Spackle, for releasing. This disease only occurs in men – allowing them to hear everything other men feel and think without a filter or way to stop it.

“I think this series could translate well to reflect societal concerns of this day and age.”

The main protagonist, Todd Hewitt is led to believe that all women of The New World were killed by the disease, so naturally he is surprised when he meets the Viola in a swamp that surrounds the town. Todd reveals his discovery to his adoptive parents, who realize that this is the best time for him to flee the town and the oppression of Mayor Prentiss.

Unlike the other works on this list, there are currently attempts to make a film adaption of this series. The adaption of the first book was announced in 2016, by Lionsgate Entertainment and was said to have finished first rounds of shooting in November 2017. It was originally set to be released in March 2019 however it was delayed due to the need for major reshoots. Reshooting was delayed further by issues with rescheduling as leads Tom Holland and Daisy Ridley are also working on their other major franchises in the Star Wars and Marvel universes.

I still have hope that an adaption of even just the first book will come into fruition, whether it be the Lionsgate version or not. I am curious to see how they create the Noise (which to me feels like an abstract representation of social media and the anxiety it brings with it). I think this series could translate well to reflect societal concerns of this day and age.

“Name One Genius That Ain’t Crazy”: How Kanye West became one of the most influential and controversial artists of all time