“Name One Genius That Ain’t Crazy”: How Kanye West became one of the most influential and controversial artists of all time

Many artists are known for their passionate and loyal fanbase. However, the group that immediately springs into the forefront of my mind is always the Kanye West fanbase.

Kanye West is inescapable. He has established himself as one of the most important names in modern music and pop culture as a whole, and like me, most of his fans eagerly devote hours to fervently debating his best work as well as defending and debating his accolades. He is both one of the most beloved and respected artists in recent history, as well as one of the most hated and despised. Regardless of which of these sides best represents how you may feel about Kanye, his story is eclectic and thrilling, one of triumph, failure, and art, and by looking back at it we get a greater understanding of the icon that is Kanye West.

Kanye began as a producer, famously dropping out of college education to make beats for several rappers, most notably Jay-Z. His beats, with their incorporation of obscure soul samples and emphasis on vocal loops, have always stood out since their first appearance. However, Kanye wanted to pursue a career as a rapper as well, even after being rejected by an array of record companies due to his image not being ‘gangsta’ enough.

After being involved in a near-fatal car crash in 2002 and having to undergo jaw surgery, Kanye released his first solo song Through the Wire, in which he raps, quite literally, through the wire keeping his jaw shut and healing. It was this song that helped launch his monolithic rise in the industry.

In a career spanning two decades, it is indisputable that Kanye West has established himself as one of the most important musical artists of all time.

Kanye’s first album, The College Dropout, with its honest and passionate lyrical approach to social issues and everyday life, is still revered as his best by many fans. Its stand-out single, Jesus Walks, tackles faith and conflict in modern America, and reached the top-end of the Billboard charts in 2004 despite being rejected by industry executives for being too controversial. With this event began another equally prevalent facet of Kanye’s career: his embrace of controversy.

In 2005, Kanye famously went off-script during a Hurricane Katrina relief broadcast, with the famous statement: “George Bush doesn’t care about black people.” The statement sparked mass media coverage and attention, an environment in which Kanye seems to thrive. This was also around the time that Kanye’s acclaimed sophomore album, Late Registration, was released, spurring him to create his G.O.O.D. Music record label. The label has been a force in the industry since its inception, helping birth the careers of the likes of John Legend, Big Sean and Pusha T.

One of the reasons I am so in awe of Kanye West is his complete disregard for genre constraints. Though rap in the 2000s was in many ways restricting for someone with his level of musicianship, he didn’t let this stop him from pursuing unorthodox styles in his music. In a bold move, his 2007 album Graduation combined synthesisers and electronica to craft huge anthemic hip-pop tunes. Not only did the album help revive techno-infused music in the late 2000s, but by beating 50 Cent’s Curtis for the No. 1 debut spot, it marked a distinct shift in the attitude of hip-hop fans: the ultra-macho image of the gangster rapper that had been prevalent for years was now taking a backseat to the more conscious yet playful persona of Kanye, who was also one of the first rappers to publicly speak out against the genre’s toxic masculinity and homophobia.

Kanye’s next album, 808s & Heartbreaks, is arguably his most influential. Released in 2008 after the untimely death of his mother and the end of his engagement, the album deals with loneliness and heartache under the atmospheric veil of minimalist production and layered autotune. There is essentially no rapping on the album, as Kanye pours his heart out into singing its distorted synthetic melodies. The album was a direct influence on Drake and Kid Cudi’s equally influential dejected vulnerability, and has helped form the basis for the current emo trap scene, with the likes of Post Malone and Juice WRLD.

Completely unlike anything heard before at the time, Yeezus saw Kanye incorporating the harsh sounds of Chicago drill and industrial house with the Caribbean ambiance of dancehall to form his most raw and untamed project yet.

By the time My Beautiful Dark Twisted Fantasy came out in late 2010, Kanye’s career had been in a chaotic whirlwind, having received international hatred for interrupting Taylor Swift’s acceptance speech at the 2009 MTV VMAs and seemingly abandoning music for fashion ventures. The album, my favourite from Kanye, is a polar opposite to 808s. Following a maximalist philosophy, Kanye explores his love-hate relationship with fame in the project: attention, lust, excess, crisis. As well as being an audio and visual experience, the album also further illustrates Kanye’s keen ear for the merging of musical styles, with strong rock influences and features ranging from Raekwon and Rick Ross to Bon Iver and Elton John.

For the next couple of years, Kanye focused on collaborative ventures: Watch the Throne with Jay-Z came out in 2011 and Cruel Summer with his G.O.O.D. Music signees came out in 2012. Many say that this period marked the final breath of the ‘bling era’ of rap, which placed an emphasis on money and jewellery as an almost royal form of power. After this, another focus shift began in hip-hop, lending way to new themes. 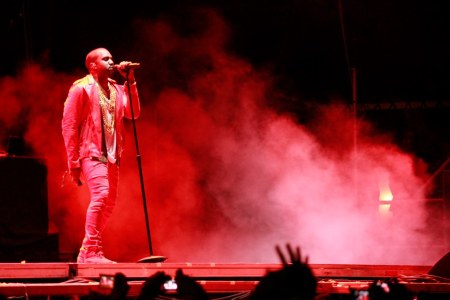 It can be said that Kanye likes to work in extremes, subverting expectations at each turn. The 2013 release of his album Yeezus is still seen as one of Kanye’s bravest artistic decisions. Completely unlike anything heard before at the time, Yeezus saw Kanye incorporating the harsh sounds of Chicago drill and industrial house with the Caribbean ambiance of dancehall to form his most raw and untamed project yet, one he made with the intention of ‘undermining the commercial’. The harsh abrasiveness of the album was seen as messy and vulgar by many upon its release, but it has since become recognised as hugely influential and forward-thinking, receiving high praise from the likes of music legend Lou Reed.

Kanye has also, for better and for worse, redefined what it means to be a celebrity in the 21st century.

The following three years saw Kanye going through a musical hiatus. With his marriage to mega-celebrity Kim Kardashian and newfound fatherhood, Kanye only released a few singles in this period, most notably collaborating with Paul McCartney and helping bring attention to the rising Grime scene in UK rap at the 2015 BRIT Awards. These years also saw plenty of controversy from Kanye: the peak of his polemic fashion endeavours, the delayed release of his next album and his controversial headline performance at Glastonbury, in which he named himself “the greatest living rock star on the planet”.

Kanye released The Life of Pablo in 2016, an album which embraced much of his superstar megalomania from the early 2010s. Along with lyricism that ranges from introspective to ridiculously obscene, the album delivered something that is common to Kanye’s work: the introduction of exciting up and coming musicians, in this case Chance the Rapper. 2016 also saw Kanye marred by the most amount of controversy of his lengthy career. The music video to Famous, a song which affirms Kanye’s responsibility in making Taylor Swift a household name, features naked lifelike statues of various controversial public figures, including himself, Swift and Donald Trump. As expected and likely intended, it sparked outrage.

In his tours that year, which revolved around an innovative ‘hanging-stage’ design, Kanye would often cancel and curtail concerts, opting instead to go on confusing and alienating pseudo-political rants, repeatedly exclaiming his support for President Trump, whose right-wing policies and discriminatory rhetoric are understandably deeply unpopular among many of Kanye’s fans.

Kanye was admitted into a psychiatric clinic later that year, and proceeded to take a break from public life. When he reappeared in 2017, his support for Trump was more vocal than ever, and Kanye was often seen that year wearing the infamous MAGA (Make America Great Again) hat, even going so far as meet repeatedly with the President. Kanye’s political commentary, though seemingly witty and insightful in the early stages of his career, has since become generally vapid, resorting often to affirmations of his inflated ego and incomprehensibly disjointed rambling. Occasionally, these rants have even become pathetic and offensive due to their ignorance, most notably Kanye’s labelling of slavery as a ‘choice’.

Musically, 2018 was a triumphant return for Kanye. He released two highly-acclaimed albums that year: ye, one of his most personal and stripped-back efforts yet, a great relief for many who were expecting a politically charged album, and the wild joyride that was KIDS SEE GHOSTS with Kid Cudi. He also produced several other artists’ albums. Paradoxically, this was the same year that Kanye fully embraced ‘internet troll culture’ and released a song in which the lyrics consist entirely of “poopy-di-scoop”. He further alienated many of his older fans and embraced the meme by working with a number of SoundCloud-born trap rappers that year: from the cartoonish Lil Pump and 6ix9ine, to the late yet contentious XXXTENTACION.

After the infamously scrapped Yandhi album, Kanye has adopted, as is entirely unsurprising at this stage, a new persona. In 2019 Kanye is now an outspoken Christian figure, holding his frequent Sunday Service gospel shows and recently dropping the dogmatically faith-focused album JESUS IS KING, set to have a sequel in the near future. He has also since teamed up with controversial televangelist Joel Osteen at his pastoral speeches and directed a bizarre adaptation of the opera Nebuchadnezzar starring mumble rapper Sheck Wes. This all goes without mentioning, of course, that Kanye is supposedly running for US President in 2024.

In a career spanning two decades, it is indisputable that Kanye West has established himself as one of the most important musical artists of all time. The fact that his fans all see different works from him as his best, and that there is no clear consensus on their ranking, is a mere testament to his unmatched musical consistency over the years. Kanye has time and time again altered not only the basis of hip-hop, but also of popular music in general, blending genres and approaching artistic expression in a wholly unique manner.

With his unhinged and self-absorbed persona, Kanye has also, for better and for worse, redefined what it means to be a celebrity in the 21st century. He is a musician that not only rejects the constraints placed upon his image and craft, but openly embraces their most unconventional divergence. In accomplishing so many ground-breaking feats in such an idiosyncratic manner, Kanye has not only fostered one of the music world’s most formidable and devoted fanbases, but also ensured that conversation and discussion regarding him and his music will likely never diminish.

Love him, hate him, or both: there is and can only ever be one Mr. Kanye West.

Books and Comics That Should Be Adapted for Film and TV