January Book of the Month: The Kingdom 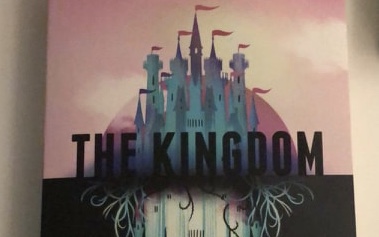 Jess Rothenburg welcomes us into a futuristic Disney-esque theme park in The Kingdom, a hub of scientific innovation where animatronic princesses known as fantasists give guests the time of their lives as they explore expansive biomes filled with mythical and extinct creatures alike.

However, whilst the setting reads like something out of a fairytale, the plot does not; the book begins in the midst of a murder trial.

At the heart of the story is a fantasist called Ana, who has been accused of murdering one of the members of staff. Though it may seem initially to be a cautionary tale about the risks of giving robots free will, this is revealed not to be the case; interspaced by police reports and interview transcripts, we see behind the scenes of this perfect world and discover its dark secrets.

Instead of fearing the strange, robotic princesses of the park, who seem to have malfunctioned to the point of evil, Rothernburg encourages us to empathise with and feel concern for them. Designed to be beautiful, obedient, restrained and patient hostesses, these girls are controlled and manipulated by their creators, subjected to atrocities which are often wiped from their minds.

This story is of their attempts at escape, to exercise and enforce their agency in whatever way possible. Rothenburg builds intrigue and suspense in such a way that will have you completely immersed – I found it extremely difficult to put this book down, and finished it in about 24 hours.

There are many features of this book which makes it a unique and worthy read: for one, it takes on the dystopian genre, placing it into a small, controlled society instead of a country-wide one; secondly, it’s obviously a story told from non-human eyes, which gives the narrative a different twist. Rothenburg also tackles many poignant issues, such as the objectification and mistreatment of women and the ethics of robotics, especially those with a human-like sentiency.

I’d recommend this book to anyone looking for a fairytale with a twist. If you’re a fan of dystopian and sci-fi genres and think a story of sisterly love and human/robot romance sounds interesting, I guarantee you’ll enjoy this book. It’s structure makes it an especially interesting read, and the subject matter tackled by Rothenburg is done so in such a way that really makes you think. Also, the cover is just so beautiful, who wouldn’t want that in their library!