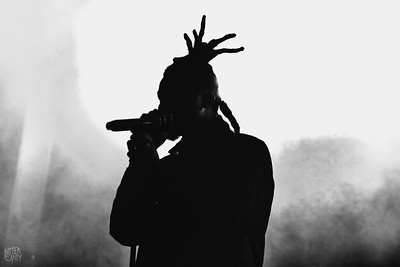 Q: What do Sun Tzu, Harry Potter, and Nandos have in common?

A: Nothing, but Denzel Curry managed to reference all of these and more on UNLOCKED. A 17-minute rollercoaster of an album that he and producer Kenny Beats have made in three days.

“Since 2018 he has released an album every year; each one totally different from the last yet consistently good”

For Denzel, UNLOCKED is a hat trick, for sure. Since 2018 he has released an album every year; each one totally different from the last yet consistently good. First, we got the dark and conceptual TA13OO which was one of my favourite albums of 2018. Then, last year’s ZUU was a blast of fun and energy, rooted in the Miami sound and featuring Miami veteran Rick Ross, among others.

This time round, the project has a more underground sound that has already been widely compared to MF Doom, particularly the classic Madvillainy, in part for its production: its sampled intro and interlude tracks that must surely be conscious callbacks.

“It has a rawness that works in Kenny’s favour”

Kenny Beats’ production can stand next to Madlib’s (who also released a great collab album last year with Freddie Gibbs) on Madvillainy. It has a rawness that works in Kenny’s favour, perhaps thanks to the speed at which it was all conceived, and the tracks zip all over the place with classic samples and classic basslines, co-existing with more futuristic elements and frequent wild modulations of Denzel’s voice. The length of the album’s eight tracks also makes it feel like a product of unrestrained creativity – many cuts are less than two minutes long.

UNLOCKED’s brevity can certainly be seen as an issue, and I can’t help wishing a little more time had been spent on the album to make it feel more like a complete package. Strangely at odds with the fact that this album is shorter than my commute is the repetition of Denzel’s hooks and verses on some tracks. Looking at the lyrics on paper there doesn’t seem to be an issue, but it still stuck out to me when listening to the album.

Curry’s (largely freestyled) work here is as impressive as ever – his signature wordplay hasn’t gone anywhere. He manages to work together all sorts of pop culture references into his braggadocious rhymes that have the same insane level of energy to be found on his previous albums. He moves through flow after flow and at one point makes a scarily close imitation of DMX on ‘DIET_’ (which also reminded me of his phenomenal cover of ‘Bulls on Parade’). Essentially, Denzel Curry has maintained his spot as one of the most skilled rappers around right now.

“UNLOCKED is a musical espresso shot that takes about as long to consume, and leaves about as strong of an impression”

To me, the pure fun-factor that both Denzel Curry and Kenny Beats inject into UNLOCKED is enough to make it a success. The consideration and social conscience of the former’s past efforts like TA13OO is all but gone, but a ridiculously entertaining listen remains. UNLOCKED is a musical espresso shot that takes about as long to consume, and leaves about as strong of an impression. Tastes a bit nicer though.